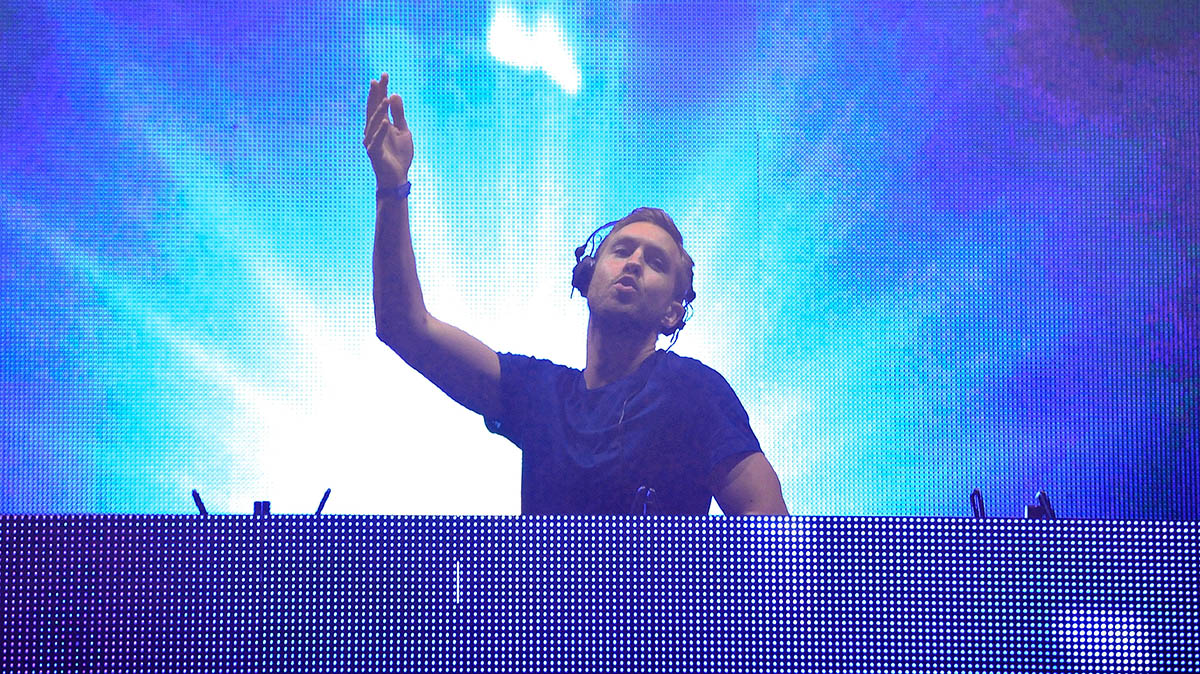 When you listen to a Calvin Harris album by yourself on a computer, it doesn’t take long to realize you are experiencing the Scottish DJ’s music incorrectly. Calvin Harris songs aren’t meant to be heard in LP-size portions any more than doughnuts are supposed to be consumed by the dozen. Harris’s 2012 LP, 18 Months, was like a one-man NOW compilation, featuring an incredible eight singles that went Top 10 in the U.K. Two of those songs were pivotal for establishing Harris’s pop credentials in the U.S.: Rihanna’s “We Found Love” and Harris’s own “Feel So Close” typify his house style, where the played-down chorus is cast in a subordinate role to sky-exploding convulsions of sound that unfold like battle scenes in a medieval epic.

Harris’s new album, Motion, replicates the format of 18 Months, frequently setting simple, ringtone-like keyboard hooks and rocket-launch dynamics against a guest star’s searchingly emotional vocals. On the radio, Harris can leave a lasting impression. (“We Found Love” and “Feel So Close” rank among the most transcendent singles of the last half-decade.) Hearing an entire album like this, however, is like standing in line for an hour at an amusement park, surrounded by giddy animatronic hosts. The banter goes from seeming cute to canned pretty quickly. 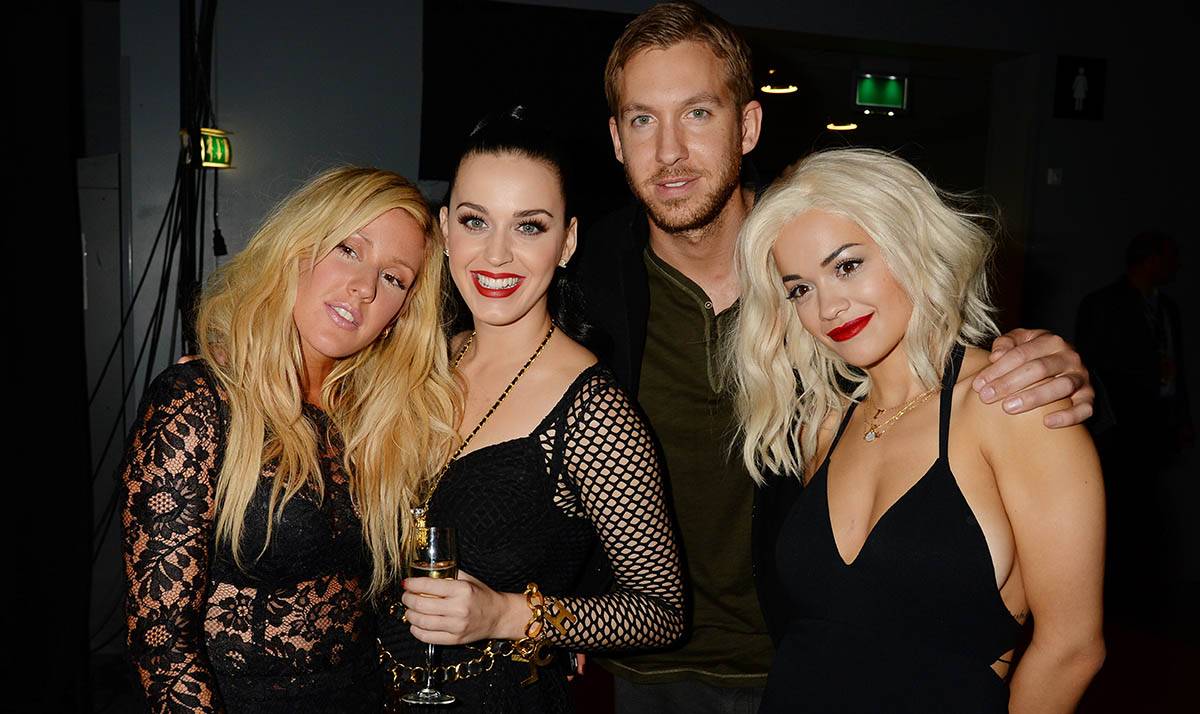 The knock on Harris is that he’s a formulaic songwriter and one-note producer whose weaknesses have been compounded by his inescapable success. You don’t have to seek out Calvin Harris songs — they have become core components of our shared oxygen. Even his good songs have grown tiresome, while his bad songs are just annoying. (If hell has a waiting room, it is currently spinning “Awooga” for the 47.3 millionth time.) Harris’s obviousness is either an artistic liability or perhaps his greatest commercial asset. After two records of pleasant if inconsequential bachelor-pad electro-pop in the late ’00s, he remade himself into the pop-friendly face of EDM’s opulent, celebrity-obsessed wing. If the ubiquity of wubby bass pummels and Mortal Kombat–style synth surges in the early ’10s can be likened to the omnipresence of hair metal’s wanky guitars and warring banshee vocals in the late ’80s, then Harris is the modern-day Poison.

Case in point: When Poison wanted to write a song about nothin’ but a good time, it called it “Nothin’ But a Good Time” and put the guitar solos and horndog lyrics precisely where you’d expect. When Harris set out to write a summer jam for 2014, he called it “Summer” and chased the melancholy chorus with the predictable auto-apocalyptic four-on-the-floor stomp.

Now repurposed as Motion’s centerpiece, “Summer” went triple platinum and became Harris’s highest-charting single as a lead artist in the U.S. Not making the audience work hard is clearly a winning strategy. And it has made Harris an attractive collaborator for artists looking for a quick and easy entrée into the pop charts — Motion includes guest spots from veterans in need of a reboot (Gwen Stefani), hip-hop B-listers hungry for Hot 100 advancement (Big Sean), and cool underground kids playing footsie with the mainstream (Haim, Tinashe). The one-Harris-fits-all method produces inevitably mixed results: His most successful collaborators have been women (like Rihanna and Ellie Goulding) whose blankness and chilly vocal styles have contrasted nicely with the all-encompassing optimism of the music. When Harris doesn’t have a calming emotional counterpoint, and he often doesn’t on Motion, he can be overbearing and repetitive, like a record skipping on an oppressively loud sound system.

For two years, the “when will it bust?” question has been driving the EDM narrative in the music press. Perhaps it’s natural to expect that this explosively growing industry — estimated to be worth a staggering $6.2 billion, according to a May report by the Association for Electronic Music — will crash just as spectacularly at some point, though it’s difficult to discern any significant warning signs on the horizon. In fact, I suspect it will be less a crash and more something like a rebranding. The most-cited antecedent for EDM is disco, which was supposedly reduced to a pile of ash by record-burning Midwestern yahoos at the end of the ’70s. The reality — as reality tends to be — was less definitive: While the signifiers of disco’s cultural footprint — the leisure suits, the Bee Gees, John Travolta and basically anything to do with Saturday Night Fever — fell out of fashion, the actual music didn’t disappear. Instead, it was absorbed into pop to the point of invisibility. The Bee Gees still wrote hits; they just did it for people like Barbra Streisand, Dolly Parton, and Kenny Rogers.

Something similar has happened to EDM. In 2012, EDM represented the pop zeitgeist. In 2014, a profoundly weird year for pop by most measures, the zeitgeist has moved to white female rappers and Canadian reggae singers. No longer a trendy ingredient, EDM is just another run-of-the-mill condiment in pop songs, as perceptible to most palates as an extra pinch of salt in an already rich dish. To use our current reigning pop star as a measuring stick: Taylor Swift incorporating dubstep-style drops into what was an ostensibly country album seemed revolutionary two years ago, whereas now she’s gone full-EDM with nary a protest outside of those currently self-medicating with Swiftamine.

Motion is bound to the present by Harris’s tacit acknowledgment that pop songs circa Right Now are moodier and more ’80s-obsessed than his well-worn template typically allows. “Blame,” his current hit collaboration with U.K. soul belter John Newman — he’s their version of Mayer Hawthorne — has been interpreted as a comment on Harris’s breakup with the pop singer Rita Ora, which is as close to a Sia or Tove Lo song as he’s bound to get. Harris is better off when he sublimates himself and bends to the personality of the singer: His Haim collaboration, “Pray to God,” is an absolute knockout, mostly because it sounds more like something off Days Are Gone than a Calvin Harris song, with “Eye of the Tiger” guitars and the Haim sisters’ trademark pick-a-little, talk-a-little harmonies pushing the fireworks to the margins.

It should be noted that chart success for Harris has long been the means to an end. He is first and foremost a live act. The top earner on Forbes’s Electronic Cash Kings list for two years running — his estimated pull in that time is about $112 million — Harris has built his kingdom by parlaying his pop prowess into massively well-compensated live appearances in Las Vegas and on the festival circuit. Harris aims squarely for the middle, offering the rare music-oriented product that people are still willing to pay for. In a live setting, his songs make rich hobnobbers in exclusive clubs feel like they’re communing with a beautiful mass of humanity inside a roomy arena, and the proletariat packing roomy arenas believe that the concession stands are offering high-priced bottle service. 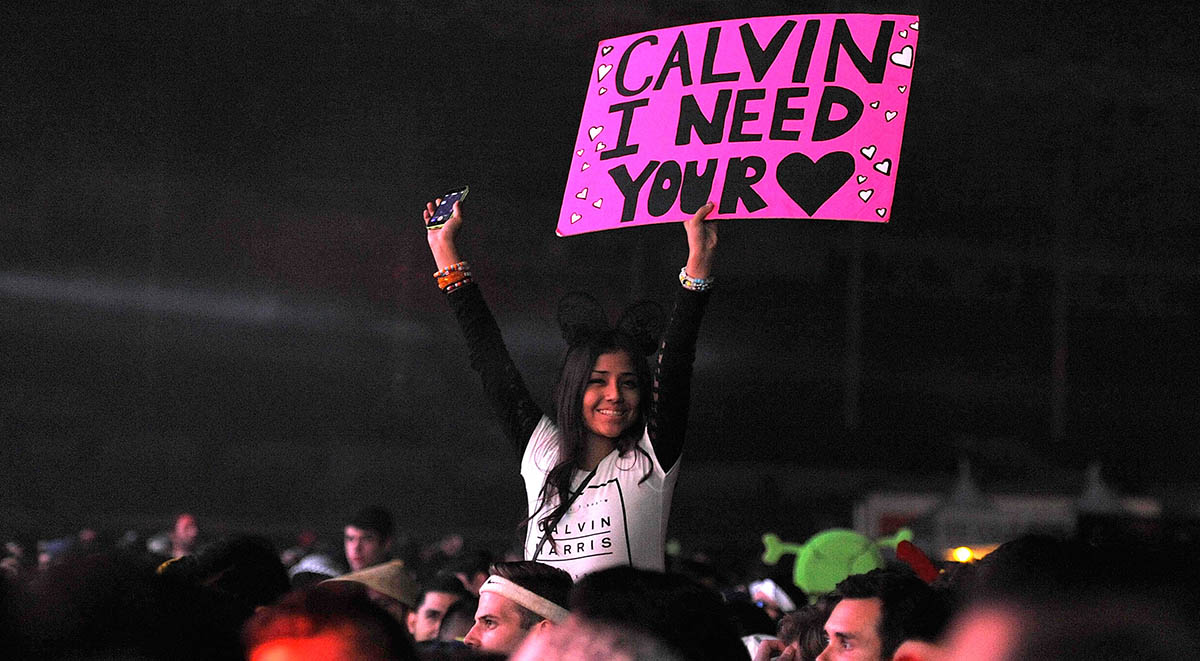 EDM fame truly is the best kind of fame: In recent years, Harris has outearned Jay Z and Katy Perry while dealing with a fraction of the media coverage. As a performer, Harris has a fairly low bar to clear. It’s easy to lapse into cynicism watching live clips of Harris’s festival spots on YouTube: He apparently demands no more of himself than he does of the audience. So long as the light show is in order and the sound mix is adequate, he can get away with lightly swaying behind a console, or merely presenting a legendary hip-hop hyphenate lightly swaying with him behind a console. Then again, while Harris might not be much to look at, it’s doubtful most people at his shows are looking at him anyway.

Some of the most vocal critics of EDM’s boom period have been the artists themselves, who worry that festivals now overshadow the talent on the marquee. While that might be worrisome for artists, it could be good for the long-term viability of the genre. Recorded music has little financial worth now, and star power is always fleeting. But what never seems to go out of style is people between the ages of 16 and 26 needing a venue where they can dance, ingest intoxicants, and/or locate potential partners for sexual misadventures. Listening to Motion outside of that context underscores just how much Harris’s music relies on the presence of an audience. Harris is like a jam band on higher-energy drugs. The music is fine, but you really have to be there, with the people, to understand, man.

Q&A: Flea of the Red Hot Chili Peppers Talks ‘Low Down,’ Playing a Junkie Jazz Musician, and His Acting Career