Q&A: Flea of the Red Hot Chili Peppers Talks ‘Low Down,’ Playing a Junkie Jazz Musician, and His Acting Career 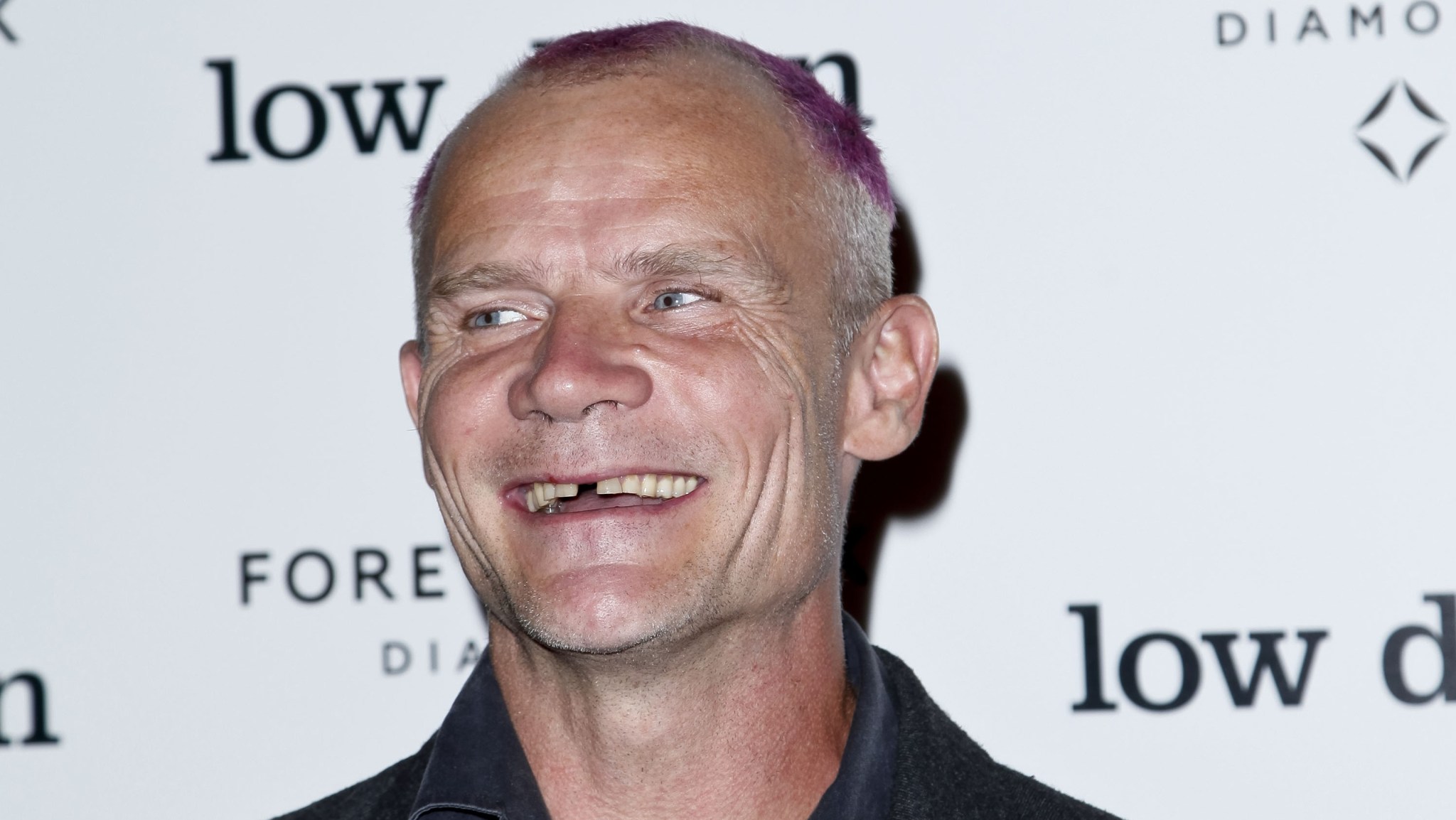 Flea is obviously best known as the bassist of the Red Hot Chili Peppers, and more recently for his collaboration with Thom Yorke and Nigel Godrich in the band Atoms for Peace. He has also done a massive amount of work as a session player for acts ranging from Alanis Morissette to the Mars Volta, to Patti Smith, to Young MC. But while the man born Michael Balzary has been out there as a musician for more than 30 years, he’s also been appearing in movies for nearly the same amount of time, though not nearly as frequently. He started out in Suburbia and Dudes, the two punk-rock films from director Penelope Spheeris, and closed out the 1980s with the small role of Needles in the two Back to the Future sequels. Since then, his brief-but-memorable parts have included playing a nihilist in the Coen brothers’ The Big Lebowski, a Pacific Northwest wanderer in Gus Van Sant’s My Own Private Idaho, and a hippie licking acid off of Johnny Depp’s sleeve in Terry Gilliam’s adaptation of Fear and Loathing in Las Vegas.

His most developed acting work now comes in the independent film Low Down, which is already out in New York and Los Angeles and will be released around the country in the coming weeks. Flea plays Hobbs, a trumpeter and friend of the jazz pianist Joe Albany (played by John Hawkes), who is also a fellow heroin addict. Low Down follows Albany’s relationship with his teenage daughter Amy (Elle Fanning) and their life together in beat-to-shit Hollywood in the 1970s. (The film was cowritten by Amy Albany and is based on her memoir of the same name.) Flea, whose own stepfather was also a jazz musician and a heroin addict, also became an executive producer on the film. Earlier this week, we talked about his participation in Low Down and how it fits into the progression of his acting career.

How did you get involved with Low Down?

A script arrived at my door one day, and I was just told it was a jazz movie. I grew up with jazz. For me it’s the high-water mark of American culture — not so much contemporary jazz, which has become kind of academic, but the jazz from the ’20s on through the ’70s. It’s a story about a little girl growing up in Hollywood in the ’70s with a jazz-musician parent who’s a junkie, and I’m reading this script and I start tearing the pages — my mind starts getting absolutely blown more and more as I read on, because I grew up in Hollywood in the ’70s with a jazz-musician parent who was a junkie. It’s so parallel to my own story that I can’t even believe it. The thing was just resonating with me in such a deep way. I was just like, I’ll do anything to act in this movie.

I met with them, and they were such nice people. And it turns out that Amy, who wrote the script and it’s her memoir, she was kind of familiar with my story. So I became involved, and after they cast me as an actor, I really wanted to help make it happen, so I got involved as a producer.

Did they have that particular role of Hobbs in mind for you?

Yeah. Luckily, they didn’t make me audition, because I’m really terrible at auditioning for movies. Had I auditioned, they probably wouldn’t have wanted me.

Click here for all of our interviews with fascinating people from the worlds of sports and pop culture.
Obviously, this is not a movie that is for everybody. It’s a heavy, sad, melancholy movie, but to me it’s one that hits home in such a powerful way. I play a jazz guy from the ’70s who’s got a drug problem. I grew up with those guys. Those were the guys that were around my house, that were a part of my life all the time. These guys had mastered this art form of jazz — which is such a sophisticated thing and so difficult to play and requires so much discipline and practice and intellectual activity, as well as the emotional and spiritual components — and they came to L.A., especially in the ’70s, and they just could not get a job. They could not catch a break, they couldn’t make it happen. So a lot of them were bitter about that, a lot of them had drug problems. And a lot of them were not bitter and didn’t have drug problems, but were really just enlightened dudes. I knew these guys really well. I knew how they spoke, I knew what they went through, I knew what their lives were like. So for me to play one really meant a lot to me, because I loved these guys and I grew up really admiring them.

You started off as a musician playing jazz trumpet, and you’ve periodically played the trumpet in your musical career for different things, but do you still play regularly?

I go through times. I had been playing a lot for a few years, then I stopped. The last five years, I haven’t been playing at all, and I picked it up and got it together for the film. I’m so busy, man, it’s hard to get it in. Being a dad and being in the Red Hot Chili Peppers and all the stuff I have to do … The trumpet requires a lot of diligence, and I haven’t had the time.

You’ve been appearing in movies for over 30 years now, but you do it sporadically. When do you decide that you want to act? Is it something you want to be doing more of?

When something comes up and it’s interesting and I have the time, I’ll do it. At this point in my life, I have to believe in it to want to do it. It’s not just like, “Acting is fun, it’s fun to go play pretend.” If it’s some people that I respect doing a project that I believe in, then I’m down for it, if time allows. But I’m not out there pursuing acting gigs.

When you were growing up in Los Angeles, was it something you wanted to do? I imagine it was going on all around you.

Yeah, it was. It was something that was always interesting to me. I was much more fascinated by music. I wanted to play in a band, and I wanted to do music for a living, and that’s what I dedicated my life to. To tell you the truth, after doing this movie, I have a much greater desire to act than I ever have. I really had to act to play this character, this real pathetic junkie guy, which is so far away from who I am. It took a lot for me to channel that pain and turn it into art.

When I play music, it’s like I’m channeling this — I don’t know what you call it. God? Divine energy? Just something that’s way bigger than me? — to get myself into this ecstatic trance where I’m letting it move me. Everything that I do, all the work that I do as a musician, is to get myself into a position so I can do that, so when the time comes, I can let this thing flow through me.

As an actor I’ve always struggled to do that. It’s always been more of a cerebral exercise. This was the first time I was able to do as an actor what I do as a musician. I felt like I was able to let go and surrender and really let these deep emotions flow through me. It felt great to be able to do that. Not “great” in a pleasurable, fun way, but “great” in, like, I’m really doing something meaningful here. Having had that feeling, it made me feel like I could really get into this much more.

Were you able to do that because of where you are in your life? Was it the role itself? Or did you now have the tools?

It was combination of things. I thought, I’ve really got to be good in this. I really got to do what it takes to be as great as I can. I went and studied, which I hadn’t done before. I spoke with friends of mine who are really good actors; I got an acting coach. I really learned how to do it. I didn’t know before. With music, I know you’ve got to practice your scales, you got to do this, you got to do that. I know what I have to do to get myself into a position to develop the facility to channel the emotional, spiritual stuff. I learned how to do that for acting on this. It really felt like a higher level of approaching it, and that was cool.

When you did your first film, Suburbia, how did you approach acting?

That was kind of like: Hang out with everybody and memorize lines and get into the groove of it and go for it. It was very unschooled and really fun, but different. It was acting and it was being natural in front of the camera, but it wasn’t being someone drastically different from who I am.

How did the director, Penelope Spheeris, approach you about being in that film in the first place?

I was playing in this punk-rock band called Fear and they were a lot older than me. She was friends with them and went over to dinner at the singer Lee Ving’s house. She just thought that I was the kid from across the street or something. We started speaking, and we kind of just hit it off, and she asked me to come be in her movie. One thing led to another, and she carved out a part for me.

Anthony Kiedis is also an executive producer on Low Down. Was there any talk about getting him to be in it? He’s been in some other stuff and you acted together in The Chase.

No, that happened after I acted in the film. They needed help with money, so we helped out. I got involved [as a producer] during it. I helped cast a few things, and I helped get them music afterwards. I did whatever I could to help.

For over three decades now, musicians have been called upon to do some level of acting for music videos. After doing so many videos over the years, do you feel like those have helped you as an actor at all?

No, not really. You’re just kind of putting on a show. I feel like I’m exaggerating something, but it feels pretty separate from acting. Music videos — being in them is pretty silly.