People Just Do Not Stop Giving Justin Bieber Their Money 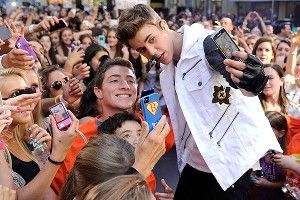 Any concerns about how Justin Bieber’s grown-up album Believe would go over with his core constituency — shrieking teens, of course — can be sidelined for now. If current projections hold, Believe will end its first week of sales on Sunday as the highest-ranking debut of the year. The official numbers won’t be out until Wednesday, but we’re looking at a figure between 410,000 and 440,000 units; that would both lock up the no. 1 spot on the Billboard 200 and trump Madonna’s MDNA, whose 359,000-unit strong sales week was the year’s previous best debut. (For the record, the biggest sales week of the year overall belongs to Adele’s 21, which moved 730,000 the week after Adele’s Grammy domination.)

Over 400,000 units would be huge for Bieber, whose biggest sales week so far in his career came when My World 2.0 managed 291,000 in its second week out. Clearly, he’s playing in the big boy’s club: While there are exceptions here and there — Lady Gaga’s last album, Born This Way, broke 1.2 million, although that was boosted by Amazon selling digital copies for 99 cents — these days, that half-a-million sales range is the high end of what can be expected. Looking elsewhere for comparison: Country A-lister Kenny Chesney’s Welcome to the Fishbowl, out the same week as Believe, is seeing sales in the 200,000 range; Bieber’s mentor Usher, who dropped Looking 4 Myself last week, topped the Billboard 200 with only 128,000 albums sold.

Bieber’s big numbers don’t necessarily mean he’s already broken out of the teen market; more likely, he’s acquired a larger share of it. As we know by the indefatigable industry domination of Susan Boyle, it’s mostly older folks and younger folks still paying money for music these days. That middle demographic that Bieber’s hoping to woo won’t show up in sales numbers. That means there shall be greater crucibles ahead until you definitively capture the hearts and minds of adult America, young Justin. For now JB can enjoy the big week, with the help of one other factoid: While Justin Timberlake’s analogous adult debut Justified would go on to sell 7 million copies worldwide, it debuted — in 2002, a time before the music industry had completely collapsed — to a relatively paltry 439,000 units sold.