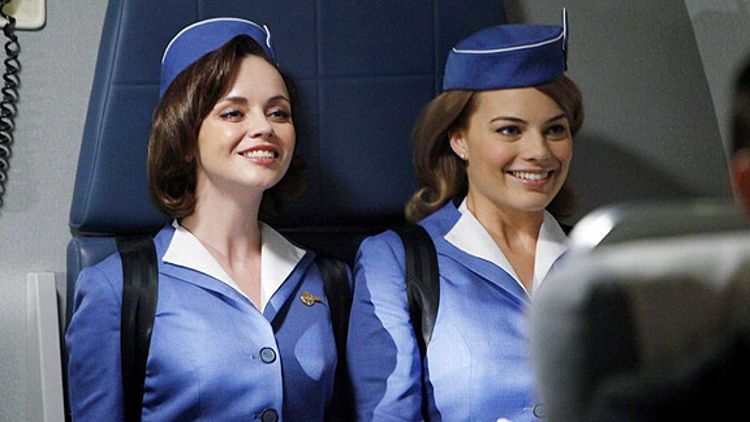 The brilliance of Mad Men is that it knows it’s selling us a faulty bill of goods. Don Draper’s looks, style and cast-iron liver are all Madison Avenue illusion, a performance dreamed up as a gateway to a better, blonder life by poor war coward Dick Whitman. This fall, in typical fashion, the major networks have missed the joke entirely, serving up two hourlong, sixties-set knock-offs that mistake the sizzle for the steak. Both NBC’s dire The Playboy Club and ABC’s Pan Am drape themselves in easily recognizable signifiers — bunny costumes for the former, wing lapel-pins and pillbox hats for the latter — rather than doing the hard work of creating human beings who are more than the sum of their drinks.

So, yes, there are plenty of problems with Pan Am, which embarked last night (and achieved an impressive cruising altitude), but it’s of note that not one of the problems is wearing an impossibly pressed stewardess suit. Kelli Garner is well-cast as a no-nonsense, martini-shaking Jane Bond. As her younger sister Laura, Australian mannequin Margot Robbie is sufficiently wide-eyed. Christina Ricci’s involvement in this whole plasticky affair still rankles — whither Wednesday?!? — but her bug-eyed intensity brings a frisson of danger to an otherwise toothless hour. One can’t help but shake the feeling she’s the real spy here, a double-agent under deep cover from a better, more interesting program. (I can’t be the only one who kept forgetting she was flying to the U.K. for work and not a Sisters of Mercy concert.) Best of the lot is Karine Vanasse as Colette, a frantic Frenchwoman who made the rookie mistake of one night standing with the wrong random white guy in a fedora. (One should forgive her: there are an awful lot of them.) While much of the well-coiffed cast appear trapped in a glass tube of no emotion, there’s a winking inner life peeking out of the edges of Colette’s powder-blue persona: When she seduces a married man in Rome we believe it, when she later serves him a drink we understand how much she’d rather throw it in his face.

These four performances alone make Pan Am instantly better than The Playboy Club, its dim doppelganger. Credit also goes to veteran TV director Tommy Schlamme who treats the Fantasyland material — Pan Am’s sixties are wild whirlwind of female empowerment, dime-store espionage and the workaday problems of unfettered, blemish-free caucasions — as the unreality it is: Even the obvious CGI-sheen on nearly everything (including leading slab Mike Vogel’s blinding incisors) can’t dim the show’s Champagne-bubbly spirit. And, unlike Playboy’s cramped, claustrophobic intrigue, at least Pan Am takes us somewhere. If anything it leaves you jetlagged: In one hour we zip from a boho Epcot vision of Greenwich village (where Ricci’s soon-to-be-ex listens to jazz and confuses Marx with Hegel) via helicopter to Idlewild Airport, and then, via flashback, to a ruined suburban wedding, an Italian idyll populated entirely by the extended family of Luigi Risotto, and, hilariously, the Bay of Pigs where Captain Ken proposes to his Stewardess Barbie while a gaggle of dark-skinned extras clap happily and incoherently in the background.

If anyone has reason to run like this, we’re told, it’s Robbie’s Laura who has only just recently escaped the yoke of her supermodel looks and fancy wedding plans to follow her big sis into the female-friendly skies. Of course, at this early stage we’re not really allowed to understand Laura as anything more than a big beautiful kid, a waify naif who is already featured on the covers of more magazines than she’s managed to offer to passengers. Even her sister recognizes Laura as an empty vessel soon to be filled with the hopes and dreams of an audience. “It’s not you, it’s the promise of you,” Kate explains about the impromptu Life magazine cover model — just after discovering the cartoonish Russkie whose passport she nobly swiped onboard is actually a brooding hunk of English Stilton. And that promise is what just might keep us watching, even as the cheese at times appears overwhelming. Obviously the show has added the spy angle to broaden the world beyond the zero stakes of commercial air travel but for now it feels as forced as Ricci’s good cheer. (Her “Better buckle up: adventure calls,” had us reaching for the barf bag. And our The Opposite of Sex DVD.) Better to focus on the far-flung froth, and revel in a time when airplanes served caviar, liquids were allowed on carry-ons — especially if they were Grand Cru, and the worryingly tiny Christina Ricci was required to wear a girdle in public.