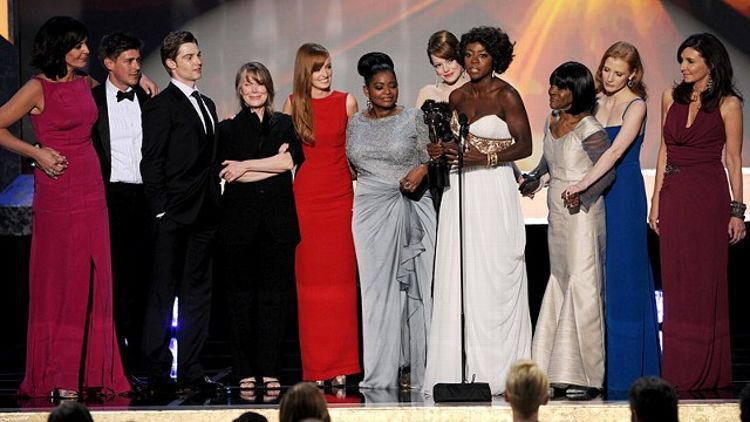 As the Academy continues to discuss an accelerated awards calendar for future Oscars (coming in 2013: Goodbye, paper ballots; hello, electronic voting and endless conspiracy theories about hacking!), there’s one thing I hope the Board of Governors will bear in mind: They need to allow one week for generalized postnomination rage. This wasn’t necessary before the Internet, which tends to reinforce in everyone the need to express, via blog, tweet, or status update, the conviction that anyone who doesn’t share their taste must by definition be dumb or corrupt. This year’s anger seems to have taken two forms:

1.  The Oscars are irrelevant because they nominate snooty art films instead of big popular hits. To this I can only say that although I’m not a fan of The Artist, anybody who thinks that this eager-to-please confection qualifies as a snooty art film has no business being anywhere near an awards ceremony without the words “People’s Choice” in it. There’s exactly one snooty art film in this year’s competition: The Tree of Life. If you find it boring, long, and pretentious, that’s fine; I don’t like your favorite movie, either! But if you go beyond that and argue that it’s so symptomatic of the Oscars having lost touch that some kind of reform needs to be instituted, then, you know, suck it. The job of the Academy Awards is not to be “relevant,” or “in touch,” or objectively reflective of any set of preferences other than that of the voters. Contrary to cliché, the Oscars are not a popularity contest. They are weird, random, both collective and subjective, deeply idiosyncratic, and often unreliable. That’s a reason to love them, not to dismiss them.

2. This whole thing is rigged because [fill in the blank] was snubbed. “Ryan Gosling didn’t get an Academy nomination? There’s some bullshit right there,” tweeted Russell Crowe, speaking for seemingly everyone who, in the name of all that is holy about Gosling, Michael Fassbender, Albert Brooks, and Tilda Swinton, is ready to walk away in disgust. I’m OK with the annual “There’s no justice” whine — sore losing is a cherished Oscar-chatter ritual — until the word “snub” comes in, as, these days, it does immediately and repeatedly. You know what a snub is? Remember that scene at the end of Dangerous Liaisons when Glenn Close, having destroyed everybody’s lives, whisks herself off to the local opera house and everybody turns and boos and hoots her and she has to leave and go wipe off her makeup? That’s a snub. You know what a snub isn’t? Glenn Close losing the Oscar that year to Jodie Foster. Or The Girl With the Dragon Tattoo just missing a Best Picture nomination. Or voters in the Academy’s actors branch deciding that there were five supporting performances they liked more than Albert Brooks’.

Much of the sourness this year seems to be landing on one movie (and I’ve contributed my share of it). That nagging question, “Is The Artist really going to win Best Picture?” is symptomatic of a system that has spent months insistently attempting to anoint a front-runner and is now infuriated that we have one, because it makes the race too predictable. How can it possibly win? It’s been semirejected by audiences! It’s self-regarding silliness about nothing more than an actor who can’t get work! It’s completely insubstantial! (When Italian officials reported seeing “a very thin film” oozing from that capsized cruise ship, Wesley Morris brilliantly tweeted “Is it called The Artist?”)

This is the point in the Oscar season when crackpot theories blossom most gorgeously, when everybody who doesn’t like the front-runner starts working backward from the notion that if nobody wants it to win, it can’t possibly win, thus building an entirely credible case based on an entirely false premise. Nevertheless, let’s grant that The Artist is very, very far from a universally admired or beloved front-runner, and examine the most persuasive cases that it could lose.

The Case for The Descendants

Fox Searchlight made its big push for Alexander Payne’s family seriocomedy this weekend, getting the film onto 2,000 screens in its 11th weekend of release, and thus getting the movie back into the box-office top 10 — a place The Artist may never find itself — for the first time since early December. How badly does Searchlight want the Oscar? Badly enough that that clip of George Clooney nudging a single perfect teardrop down his nose, which really should count as a spoiler (if not a contender for Best Visual Effects), is now everywhere. Still, The Descendants has been handled remarkably well and now finds itself with a very respectable $59 million in the bank, while The Artist is sputtering at $17 million and seems destined to become the second-lowest-grossing Best Picture winner in the last 30 years. Awarding the prize to The Descendants wouldn’t simply be a more popular choice — it would allow the Academy to shake off its period-piece doldrums and bring the prize back to a movie that takes place primarily on American soil for the first time since No Country for Old Men.

The problem: At the SAG Awards this weekend, putative Oscar favorite George Clooney was beaten by Jean Dujardin. If the movie doesn’t have the muscle to take Best Actor from The Artist, how can it win Best Picture?

The Case for Hugo

If the movie industry is hell-bent on disappearing up its own ass this Oscar season, The Artist is not the only option. We’ve got a big, fat, homegrown movie about movies right here, folks! Hugo has 11 nominations, more than any other film, which suggests broad support from the membership. It’s got just about as much love from critics as The Artist. And it’s a kind of ideal Academy combination — a high-budget studio film that is nonetheless made according to the uncompromising vision of one of the most revered directors in the world, who’s telling a story that welds state-of-the-art technology to a deep respect for the past and a sentimentality that isn’t just about actors, but about the art of film itself. Whether you like it or not, Hugo is a swing for the fences. Next to it, The Artist is a bunt.

The problem: There’s plenty of precedent for a movie without any acting nominations winning Best Picture — in the last decade, The Return of the King and Slumdog Millionaire have gotten there — but it’s not easy, and not likely, since people who are looking for something as different from The Artist as possible are unlikely to pick Hugo.

The Case for The Help

Tate Taylor’s movie has just four nominations, but its support from actors is not to be underestimated, as we learned on Sunday, when it swept the SAGgies (I refuse to call them “The Actors”), winning Best Actress for Viola Davis, Best Supporting Actress for Octavia Spencer, and Best Cast. No movie has taken three SAG awards since Chicago, which went on to win Best Picture — as did three of the last four movies to win the Cast award. That sweep gave Davis two opportunities to make acceptance speeches, and she used them to build the best possible case for The Help, which is that for all its clumsiness and tonal wobbles, it is nonetheless a movie that grapples with race and class, and it has connected with real moviegoers as no other Best Picture nominee this year has. A Best Picture winner about those issues doesn’t have to be even close to perfect (as Driving Miss Daisy and Crash proved) if it hits the Academy where it lives.

The problem: The Help wasn’t able to score a single nomination in other branches, so where is the Best Picture support going to come from? Also, voters who want to honor the movie will have an opportunity to reward its single most successful element — and from the heartfelt reception Davis was accorded at the SAG Awards, that’s exactly what they’ll do. When even 90-year-old Betty White stands and enthusiastically cheers you, you should probably start writing your Oscar acceptance speech.

The Case Against The Artist

The argument, which I’ve heard tossed around a lot, including by some Academy members, goes like this: I don’t know what’s going to win, but it can’t be The Artist because nobody wants it to win. It hasn’t resonated with the public, it’s been wildly overhyped, Harvey is not and never will be One of Us, and it doesn’t hold up on second viewing. Giving it Best Picture would be tantamount to admitting that 2011 was a lousy year for movies, which we don’t want to do. Moneyball is a much better movie. The Tree of Life is a monumental work by an uncompromising film artist. War Horse made me cry. Or, if not those, what about …

The problem: Cases against movies never work, because Oscar votes are affirmations, not denials. Front-runners can’t be taken down abstractly; votes need to coalesce around a single opposition candidate, and even if there had been a chance of that happening this year, the unexpectedly wide field of nine nominees probably would have demolished it. Remember, The Artist doesn’t need to be a consensus choice to win Best Picture — depending on the way the ballots fall, it could technically win by receiving just 12 percent of the votes, and very credibly win with three out of four Academy members voting against it.

I happened to be in the Oscar auditorium the year Crash won Best Picture, and I can report that what sounded on TV like a gasp of surprise resonated in the theater as something closer to horror. Very few people I ran into that night had voted for Crash. But it didn’t matter, because the vast majority of Oscar voters weren’t anywhere near that theater. They were at home watching TV. And a lot of them loved Crash. And a lot of them love The Artist. It’s got 10 Oscar nominations, wins from the Producers Guild of America and the DGA, and now, the SAG award. There’s no reason to assume it isn’t going all the way.

Filed Under: Glenn Close, Meryl Streep, Michael Fassbender, Oscarmetrics, The Artist, The Descendants, The Girl With The Dragon Tattoo, The Help, The Tree of Life, Tilda Swinton