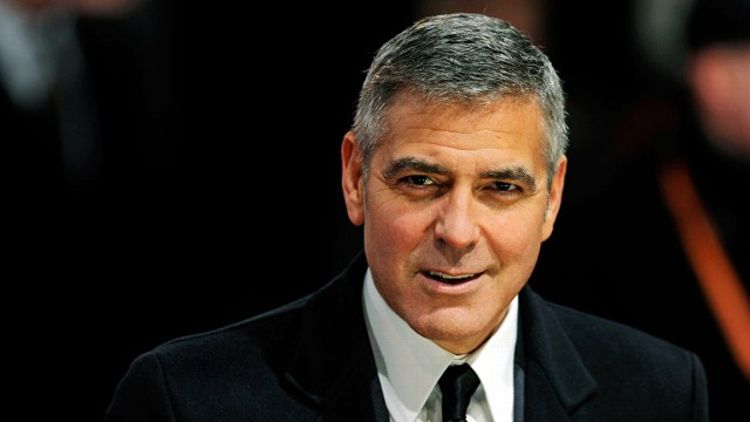 This is it. The last four predictions. Strap yourselves in, because things are about to get crazy French.

Whoever wins Best Actor had better have the grace to look surprised, because this contest is way too close for anybody to walk the red carpet outside the Kodak thinking, Yeah, I got this. Back in October, when Moneyball came out, we cycled through the whole “It’s Brad Pitt’s year and nobody can beat him” frenzy. Then The Descendants opened and suddenly George Clooney duckwalking in flip-flops and looking befuddled about parenting was supposed to make us feel that he’d finally reached the pinnacle of his profession. And now, we’re apparently past all that, and the award is going to go to a freakin’ tap-dancing mime!

Excuse me for a moment while I wipe the flecks of spittle from my lips. My words were poorly chosen and I apologize to Mr. Clooney, M. Dujardin, and the people of two great nations, France and Beverly Hills. I should be grateful, I guess, because while Best Actor is not a particularly inspiring contest, at least it’s a suspenseful one. Dujardin and Clooney each won Golden Globes. But in the last couple of weeks, the punditocracy has shifted its collective body weight to Dujardin, based on his wins at BAFTA (although thanks to the Los Angeles Times, we now know that only about 3 percent of Oscar voters live in London) and SAG (which has matched the eventual Best Actor Oscar winner for seven years in a row — but, interestingly, missed for four straight years before that).

The Descendants is now Alexander Payne’s biggest hit and could end up being Clooney’s highest non-franchise grosser since The Perfect Storm. Pitt’s performance has (and deserves) a lot of support as well, and don’t count out Bichir; sometimes it helps to be the surprise nominee, since it means you’re in the movie that everyone wants to catch up with before they fill out their ballots. Let’s imagine a scenario in which Gary Oldman picks up about 5 percent of the total vote and Bichir and Pitt each take about 15 percent. That means it’s perfectly credible for the winner of this category to get just 35 percent of the vote and the runner-up to take 30 percent. And it could easily go either way — Schumacher’s Batman or Pepe Le Who.

Sorry. Again, unwarranted. Since both Clooney and Dujardin have been on sustained charm offensives, it’s a very close call, and Pitt could certainly siphon off just enough of Clooney’s movie-star vote to give it to Dujardin. But, since I don’t mind being wrong, I’m going with Clooney, by a whisker.

In some ways, this category has ended up exactly where it always seems to — with an unidentified voter telling an Entertainment Weekly reporter that (s)he is not going to vote for Meryl Streep because her performance this year isn’t quite as great as her performance in [fill in the blank]. Been there, rationalized that. Streep has a lot to show for her work in The Iron Lady — a Golden Globe, a BAFTA prize, the New York Film Critics Circle award, and further entrenchment of her status as the best there is. But I suspect that even she suspects that this is Viola Davis’s moment.

It says something about the rather tepid field of Oscar contenders this year that the winter’s most politically charged movie argument got sparked by an excessively gentle film set 50 years ago, but Davis’ polite, firm smackdown of Tavis Smiley over The Help brought something real to a very silly season. When the talk-show host told her he wasn’t thrilled that she had to appease white Hollywood by playing a maid in order to win an Oscar, she replied, “That very mind-set that you have … is absolutely destroying the black artist, [who] cannot live in a revisionist place.”  In a season of puffball interviews and what-are-you-wearing red-carpet queries and what-does-Uggie-like-to-do-in-his-spare-time sidebars, this was a tense, lean-forward-in-your-chair moment, one that, like most of Davis’ public appearances lately, made even more people want to see her claim that Oscar. My hunch is that on Sunday night, they’ll get their wish.

Two things to note about the above list: (1) According to the Academy, the category is called Best Directing (or Best Achievement in Directing), not Best Director, and (2) only the movies, not the directors, are listed on the Oscar ballot. As if things weren’t already breaking in his favor, this is especially good news for The Artist’s Michel Hazanavicius. If names were on the ballot, a handful of voters might stop and think, “Wait a minute … Martin Scorsese, Woody Allen, Alexander Payne, and Terrence Malick. Am I really going to say that this guy I hadn’t heard of a year ago and probably won’t remember a year from now is better than they are?” But as it stands, they don’t have to think that. All they have to think is, “I like The Artist.”

Unless they like something else. Upsets do happen here, most famously nine years ago, when Roman Polanski, nobody’s idea of Mr. Popularity, beat perceived front-runners Rob Marshall and Martin Scorsese for The Pianist. But this probably isn’t a moment for fancypants precedent-hunting and elaborate theorizing. Last year, my fellow Oscar predictors and I marched straight through the Kübler-Ross stages of grief at the prospect of The King’s Speech’s director Tom Hooper beating The Social Network’s David Fincher. First we said there was absolutely no way it was going to happen (denial). Because really, to deny Fincher would be an outrage when The Social Network was so clearly the superior movie (anger)! I mean, sure, they’d probably give The King’s Speech Best Picture, but wasn’t it likely that they’d split their vote and still give Fincher the directing award (bargaining)? And that’s where we all stalled out. Our Stage 4 (depression) came during Hooper’s Stage 5 (acceptance). The Oscars, as has been made abundantly clear, are not designed to please those of us who style ourselves as professional squawkers and gripers. Michel Hazanavicius is going to win.

Eighty-three years ago, the winners of the first Academy Awards were announced, and a black-and-white silent movie won Best Picture. Actually, it was two movies, and neither of them won because the award didn’t exist yet — there was one prize for Best Production (which went to Wings) and one for Artistic Quality of Production (which went to Sunrise). Wings was a crowd-pleaser, a World War I spectacle directed by William Wellman with breathtaking, state-of-the-still-new-art aerial stunt work and a story of military comradeship, sacrifice, and love. In short, a blockbuster with substance. Sunrise was a stark, dark melodrama about illicit passion, murder, and the corrupting influence of urban life made by the German émigré F.W. Murnau (director of Nosferatu). It was tough, adult, and what we would now call auteurist.

That first year, the always-problematic Oscars were still figuring out what they were supposed to be, but give them credit where it’s due: With those two silent movies, the fledgling Academy did a remarkable job of articulating just how broad the definition of a Best Picture could be — big or small, popular or personal, heartening or horrifying, technologically up-to-the-minute or sociologically acute. And the studios were figuring it out too — Wings came from Paramount, and Sunrise from Fox.

And now, The Artist — a light romantic comedy that allows everybody to feel nostalgic without quite saying what for — is going to win Best Picture. It’s a choice that seems to be bringing the Academy full circle. Except that, unlike those first two Oscar winners, it’s an indie, not a studio film, and French, not American, and a self-conscious throwback rather than an attempt to push the art of film one step ahead into kinetic or dramatic maturity — as Wings and Sunrise both did. The fact that we’re not all hailing the imminent coronation of a silent, black-and-white movie as evidence of the Academy’s willingness to think outside the box may be a measure of our own sourness. But it’s also a measure of this particular movie — and this particular moment. If The Artist becomes the third bright, cheerful, old-fashioned non-American movie in four years to win Best Picture, it will be hard not to take it as an indication that right now, the Hollywood studios are off mission — at least, off the mission the Academy thought was firmly in place when it created these awards.

2011 was not an especially good year for movies, and the Best Picture lineup reflects that. There’s a lot of second-best work by directors, a surfeit of nostalgia, and a great deal of looking backward in order to escape the present rather than to illuminate it from a fresh perspective. This wasn’t a year we needed nine nominees — it didn’t make the list younger or hipper or anything else that some of the non-young, non-hip stewards of the Academy feel it needs to be. Five would have been fine. I happen to love three of the films on the list that don’t stand a chance — Moneyball, The Tree of Life, and War Horse. And while I don’t doubt the sincerity of voters who think The Artist is actually the best picture of 2011, I think that for some voters, selecting The Artist is the equivalent of choosing None of the Above, a statement that no American movie pleased them enough this year to merit a Best Picture Oscar, that a mild dramedy like The Descendants or a toothless “issue” movie like The Help don’t have the thrilling, visceral topicality of The Hurt Locker or the austere, astringent, uniquely American artistic vision of No Country for Old Men, the last two U.S. movies to take the prize.

And about that, they’re right. Everybody who has pointed out that The Artist isn’t a selection that’s going to add a lot of luster to the Best Picture roster is dead-on; five years after the awards (or, for some of us, five seconds after the awards), its insubstantiality is going to seem obvious. But for the voters, it doesn’t matter. This was a year in which they walked into a restaurant, looked at the menu, and decided that none of the main courses appealed to them. So instead, they ordered dessert. And after Hollywood is done licking its wounds, it might do well to go back to those first two winners and remind itself that the lesson they teach isn’t about nostalgia. It’s about always looking forward.

The Barber of Birmingham: Foot Soldier of the Civil Rights Movement
God Is the Bigger Elvis
Incident in New Baghdad
Saving Face — **WINNER**
The Tsunami and the Cherry Blossom

Hell and Back Again
If a Tree Falls: A Story of the Earth Liberation Front
Paradise Lost 3: Purgatory — **WINNER**
Pina
Undefeated

Harry Potter and the Deathly Hallows: Part 2
Hugo
Real Steel
Rise of the Planet of the Apes — **WINNER**
Transformers: Dark of the Moon

The Girl With the Dragon Tattoo
Hugo
Moneyball
Transformers: Dark of the Moon
War Horse — **WINNER**

Drive
The Girl With the Dragon Tattoo
Hugo
Transformers: Dark of the Moon
War Horse — **WINNER**