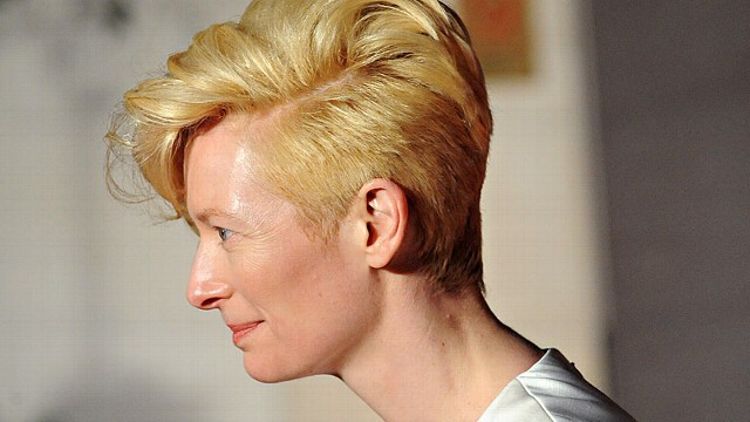 Two of the biggest snubs of this year’s Academy Awards happen to be two of my favorite movies of 2011. Neither of them is Drive, although Drive was really good and the music was so effective that two nights ago the song with the gravelly robot voice played in my dream. (As I recall, it was a horror dream.) The snubs I’m concerned with are Project Nim and Tilda Swinton’s performance in We Need to Talk About Kevin, both movies about failing to be a good parent to a charge who shits at you with a stone-cold stare, and wants to bite and maim.

Neither of these movies is particularly pleasant to watch. I saw We Need to Talk About Kevin in the theater after two weeks of trying to find someone to see it with. I had read the book with lemur eyes a few years ago, late at night, wanting to rip out my uterus and set it on fire so that I could never, ever find myself in a future chamber of horrors with a sociopathically cranky adolescent and a bow and arrow. To cover its bases, the pharmaceutical industry should have sent out copies of the book following its birth control recall: Your reproductive organs vacate your body by page 115. Way worse than Rosemary’s Baby in terms of the scope of baby evil, way more graphic when it comes to scat and eyeball injuries. But Tilda Swinton, as formerly freewheelin’ Eva Katchadourian, is even Swintonier than usual: She’s like a jar of imported pickled vegetables from a foreign umami universe, bitter and salty and pale and delightfully weird. It’s nuts to me that she didn’t get nominated for an Oscar, just on the basis of how she reacted to what seemed like a gratuitous number of shots of jelly sandwiches. Her cheekbones are their own ballet.

The jelly sandwich shots disturbed my companion at the ArcLight more than anything else: jelly crawling with ants, jelly smashed onto the surface of a table. Nobody in the theater was ready for the jelly, judging from the audible squirms, maybe because it seemed intended to symbolize a mysterious magenta byproduct of motherhood, an afterbirth that appears periodically throughout your child’s life, as lunch. This film encouraged you to use your imagination as you thought about why it made you want to barf, which I appreciated, especially because I had opted out of having a chicken and apple sausage while watching the potty-training subplot unfold. There is something about parent-child alienation, the lack of what’s supposed to be a magical and inherent immediate bond with your offspring, that is genuinely terrifying to consider. Nobody will talk about Kevin with Tilda (though, if I remember correctly, Eva Katchadourian tried a lot harder in the novel): It’s understood that her suspicions of Kevin being a malicious, conniving force of a person from infancy reflect her inabilities as a mother, as opposed to just entertaining the possibility that monsters have to come from somewhere. The movie revolves much more around Eva’s psychological drama, a suspenseful war between reality and expectations, than it does around the stinking ball of fire that is Kevin and his archaic torture instruments (computer viruses, archery equipment, bicycle locks, bowel movements). In one scene, where Kevin gets sick and is (finally) affectionately clingy toward his mother, Tilda basically vibrates with joy that is almost immediately smashed the following day with a pissed-off-fist-and-jelly-sandwich homicide; other than that one scene, a relationship is formed between Eva and Kevin that’s like a barbed wire umbilical cord: horrible and hateful, but biological and attached to vital internal organs. As Eva is destroyed by her hatred for her son, the scenery and other characters seem to melt around her, and you can almost smell the funk of her Nervous Breakdown Hair. My God! You have to hand it to that woman: She is from Mars. If she isn’t talking about greenfly, she’s melting my brain with her acting.

Project Nim is hard to watch for other reasons — the kind of reasons why you don’t want to watch PETA propaganda videos or find out how hot dogs are made, because they make you feel guilty about being a human and simultaneously greedy for innocence about the entire scientific field. As an aside, it seems kind of interesting to me that we keep trying to teach animals sign language when it might be easier to learn their language instead. Imagine how much you could blow a parrot’s mind if you addressed it by its given name! Why do we keep asking animals to impress us by learning to sign “wheelbarrow” when we could spend half the time listening to the Rosetta Stone chimp-language software and blow their minds instead? We could get them to give us treats! But I digress.

The only villain in Project Nim is behavioral scientist Herbert Terrace, whose romantic entanglements with research assistants spurred him to keep assigning Nim Chimpsy to different well-meaning caretakers in various locations (essentially: from the sickest Manhattan brownstone, where he was allowed to smoke weed and slide down banisters all day long, to monkey prison, with a few stops in between). Everyone else who makes up Nim’s adoptive community of humans are well-meaning folks — hippies mostly, tender hippies whose hearts are anchored to the right place, even if their hippie brains sometimes cruise away on vacations, urging them to “Go in there, in that cage with the chimp whose fangs are bared at you, and have a conversation in sign language” — and this aspect of the documentary is the most heartbreaking. How often humans try to do good things and wind up stepping in steaming piles of mistakes! Nearly everyone in this documentary busted an artery courtesy of Nim; one lady’s cheek was reattached (very well, might I add!). The whole film stabs you in sensitive places: cute animal infants that grow up to be regular wild animals, primate suicide, chimp babies born out of wedlock and turning to weed to cope with their broken homes. Eventually, the hypothesis of the Nim experiment — whether a chimpanzee raised as a human could learn to communicate effectively with sign language — was discarded, probably because everybody who’d had anything to do with Nim’s upbringing couldn’t stop crying enough to continue to ask Nim about the berries he’d eaten for lunch.

Project Nim didn’t perform well at the box office — even worse than The Cove, the dolphin-hunting documentary that won an Oscar in 2010 despite modest ticket sales, possibly because if there’s anything more depressing than the damage humans have done to a group of smart mammals, it’s what we have done to one particular smart mammal. But it’s interesting to wonder why We Need to Talk About Kevin and Nim were overlooked by the Academy (other than the fact that they dared to be as bleak as bowls of gray porridge with bitter syrup in the shape of unhappy faces) at a time when we are so culturally attuned to the most intimate accounts of parenting, mommy blogs. The bond between a parent and a child — or a chimp raised as one — is illustrated all over our Facebook newsfeeds and Tumblr daily photos in ways it never has been, so why not visit the strange, outlying peninsulas of the topic, the nightmare islands of Bad Seeds and the spooky keys where our good intentions get strapped to the train tracks by an angry monkey? Is it because it’s just too disturbing? Isn’t this even more disturbing? I don’t know. I’m going to live where things make sense, on a planet with pickled Swintons and Andy Serkis’ Caesar as our king.