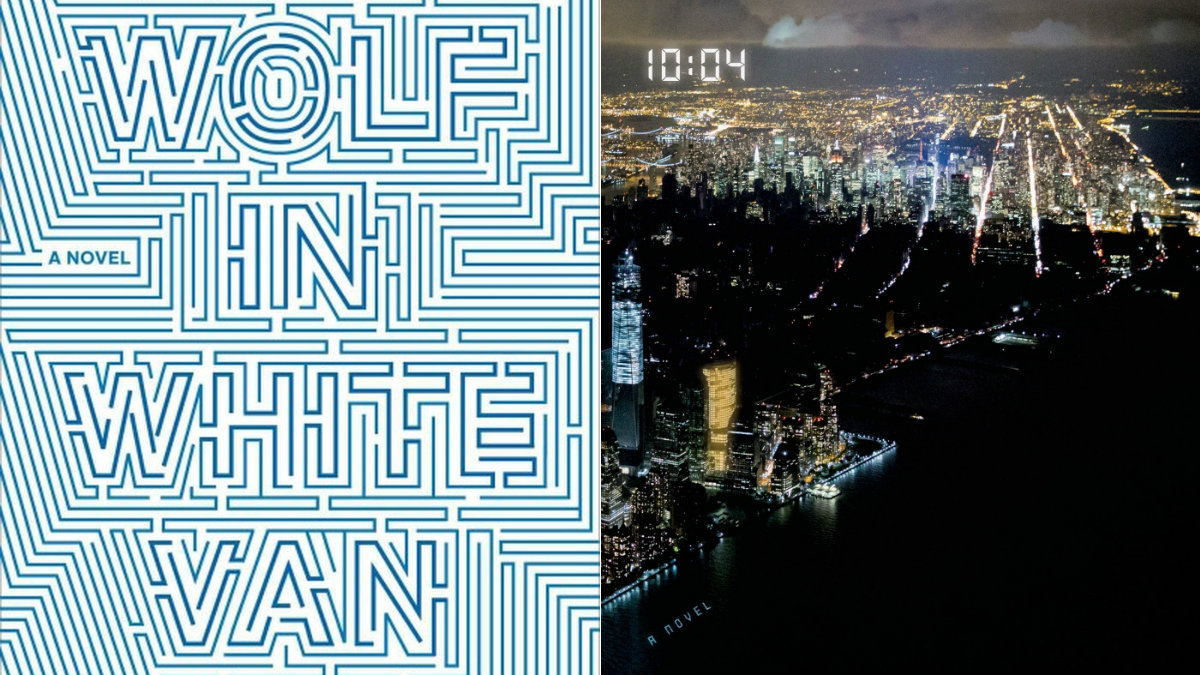 I’ve only reread two novels this year: John Darnielle’s Wolf in White Van and Ben Lerner’s 10:04. Admittedly, they are both brief novels about sad men, but they are also two of the finest works of fiction I have read in a long time.

Wolf in White Van is the story of Sean Phillips, who is left disfigured by an “accident” at a young age (later explained). His mutilation makes it difficult for him to hear or drink without a straw; his appearance makes it hard for others to be near him. In his isolation, he creates a pen-and-paper role-playing game called Trace Italian, played through mail correspondence. The game is successful enough to become Sean’s main source of income (he charges his handful of subscribers a monthly fee), and it serves as his only real window into the outside, even if it’s one that he has imagined himself. Sean writes, “I invented a world in the future and called it the Trace Italian. It was a place where I could have adventures, and when I grew up, I wanted to share those adventures with other people. I wanted specifically to share them with people like me, but I don’t know any people like me. Most people like me are dead.”

This is part of his court statement, one his lawyer reads on Sean’s behalf after a player of Trace Italian dies after acting out on her fanatical attachment to the game. We realize that Wolf in White Van is not so much a meditation on arts and games as on people’s obsessive relationships to them. (This is a risky proposition, particularly for Darnielle, who is better known as the songwriter behind the Mountain Goats.) The title itself is a reference to a ‘70s song by Larry Norman that people believed said “wolf in white van” when played backward.

Darnielle seems more comfortable rendering Sean’s emotional interior with nuance and understatement. The use of Trace Italian as a metaphor sometimes feels clumsy, but it does work effectively as a meditation on mortality. He writes, “Technically, it’s possible to get to the last room in the final chamber of Trace Italian, but no one will ever do it. No one will ever live that long.”

Wolf in White Van is a quiet novel that moves nimbly, even as it makes jumps backward and forward in time. Its non-linear structure never feels disjointed partly because Darnielle sweeps his prose from scene to scene so elegantly, but also because the plot is secondary to his interest in tone and mood. Wolf is a sentimental novel in the best way, one that allows Sean’s melancholia to be expressed without being consumed by it.

In a rare moment, Sean inadvertently befriends a couple of teenagers behind a Korean liquor store. The two boys are horrified by Sean’s disfigurement, but they’re also fascinated by him. They get into a discussion of whether Sean would choose to look “more normal” or get his hearing back. Sean picks his hearing. In this moment we understand Sean best: He will choose something that helps him understand the world over something that helps the world understand him. It’s a stunning admission about isolation, that those who choose to be alone aren’t misunderstood but do not understand the world themselves.

In contrast, 10:04 is a much more upbeat affair. It’s the spiritual successor to Ben Lerner’s debut, the literary slacker novel Leaving the Atocha Station.The two novels have much in common. Both center around a writerly schlub who acts as a stand-in for Lerner himself (those lines between fiction and autobiography are playfully obscured). Atocha and 10:04 meander into the mundane, but make surprising revelations about the nature of art and relationships. As much as I adored Leaving the Atocha Station, 10:04 is an improvement on those ideas in every single way. The book is more ambitious, more intelligent, and, somehow, even more hysterical.

Unlike Wolf in White Van, the narrative of 10:04 moves straightforward through time. It’s very much a New York novel that opens during the mild impact of Hurricane Irene and ends with the destruction caused by Hurricane Sandy. The Lerner stand-in — never actually named — has stumbled into a sort of literary success. When an agent promises that he can earn a “strong six-figure advance” for a book based on the strength of a short story that has recently run in The New Yorker, all he can do is pick at the strange octopus he has ordered for dinner.

If there is a central plot in 10:04, it’s the relationship between the main character and his college friend Alex. Though they are not romantically involved, the two attempt to have a child together. (The prospect leads to one very notable moment in a sperm bank, which is among the funniest scenes to appear on the page this year.) Lerner’s work feels so fluid, so natural that it feels like a magic trick when he moves from meditations about fatherhood to greater considerations of the world at large without batting an eye.

Lerner spans high- and lowbrow effortlessly — a notion best expressed by the book’s time-obsessed title, both a reference to an art installation called “The Clock,” by Christian Marclay, and the film Back to the Future (it’s the exact time that lightning strikes the clock tower to send Marty McFly back to the altered present). Even outside of the metafictional relationship between the author and his protagonist, 10:04 has other risky postmodern aspirations. Within the novel is the entirety of the New Yorker story that has launched Ben Lerner’s actual career, and, later, the complete text of a children’s book the author has collaborated on with a protégé. Both are great on their own and somehow work brilliantly within the context of the novel.

The novel is framed by a State of the Union address given by Ronald Reagan, in which the president references Back to the Future: “Never has there been a more exciting time to be alive, a time of rousing wonder and heroic achievement. As they said in the film Back to the Future, ‘Where we’re going, we don’t need roads.’” For Lerner, the bigger question has nothing to do with the necessity of roads but with where exactly we’re going. His main character meanders, and, even in the face of success, can hardly see the point of it all.

When talking about Trace Italian in Wolf in White Van, Sean boils the game down to “real simple math”: “There are only two stories: you go forward or you die.” Similarly, Lerner’s character in 10:04 is wavering between making choices that “[pull] us into the future” and not making decisions at all. Maybe time makes choices for us; maybe it takes them away.

Winter Is Unbecoming: Ask anyone to name a Japanese writer and they’ll name Haruki Murakami. Ask them to name another and they’ll scratch their head. If there were an author that should be at least second billing from Japan, it’s Fuminori Nakamura, who has penned a couple of the best thrillers I’ve read in the past few years. His newest is perhaps not as audacious as last year’s Evil and the Mask, nor is it as tight as 2012’s The Thief, but Last Winter We Parted is his most ambitious novel. Nakamura is still pursuing the notion of the dark, existential thriller, but here we find him delving into even more twisted territory. The novel follows a journalist interviewing a photographer who has been found guilty of burning his models alive. The mix of archival materials sometimes feel a little distracting, but Last Winter has all the mind games and twists of a satisfying thriller.

To Vaccinate or Not to Vaccinate: A few years ago, This American Life did an episode about immunization. The show was surprisingly sympathetic to parents who refused to vaccinate their kids (after all, the show seemed to say, parents can control everything that goes into their children’s bodies except for what’s in the vaccines). Delving deeper not just into the political ramifications but also the philosophical ideas of vaccines is Eula Biss’s On Immunity, an extraordinary … essay? book? To indie publisher Graywolf’s credit, it is the sort of book that no mainstream house would publish: On Immunity is too long to be an article, too short to be a full-length book. But here, Biss has expressed an idea at exactly the right length. She explores the mythology and language behind immunization (the cultural references span everything from Voltaire to vampires) and pairs them with a moving personal account of wrestling with her own fears as a mother.

Something Borrowed: It’s hard not to love Finnish author Tove Jansson. First, look at this picture of her. Second, read her Moomin comic strips. Then, look at this picture again. While Jansson is best known as a cartoonist, she also wrote a couple of wonderful novels, which New York Review Book Classics has been rereleasing over the past few years. The latest is a collection of delightful short stories titled The Woman Who Borrowed Memories, many of which are appearing in English for the first time ever. Jansson has a slightly off-kilter perspective on the world; she’s a bit like an eccentric version of Mother Nature, identifying peculiar patterns in the motions of the Earth. The stories here range in setting, but the tone is consistent across her characters — all lonely, but all gifted with a sly wink.

Adam Sandler's Making Four Movies for Netflix: Just What in the Hell Is Going On Here?