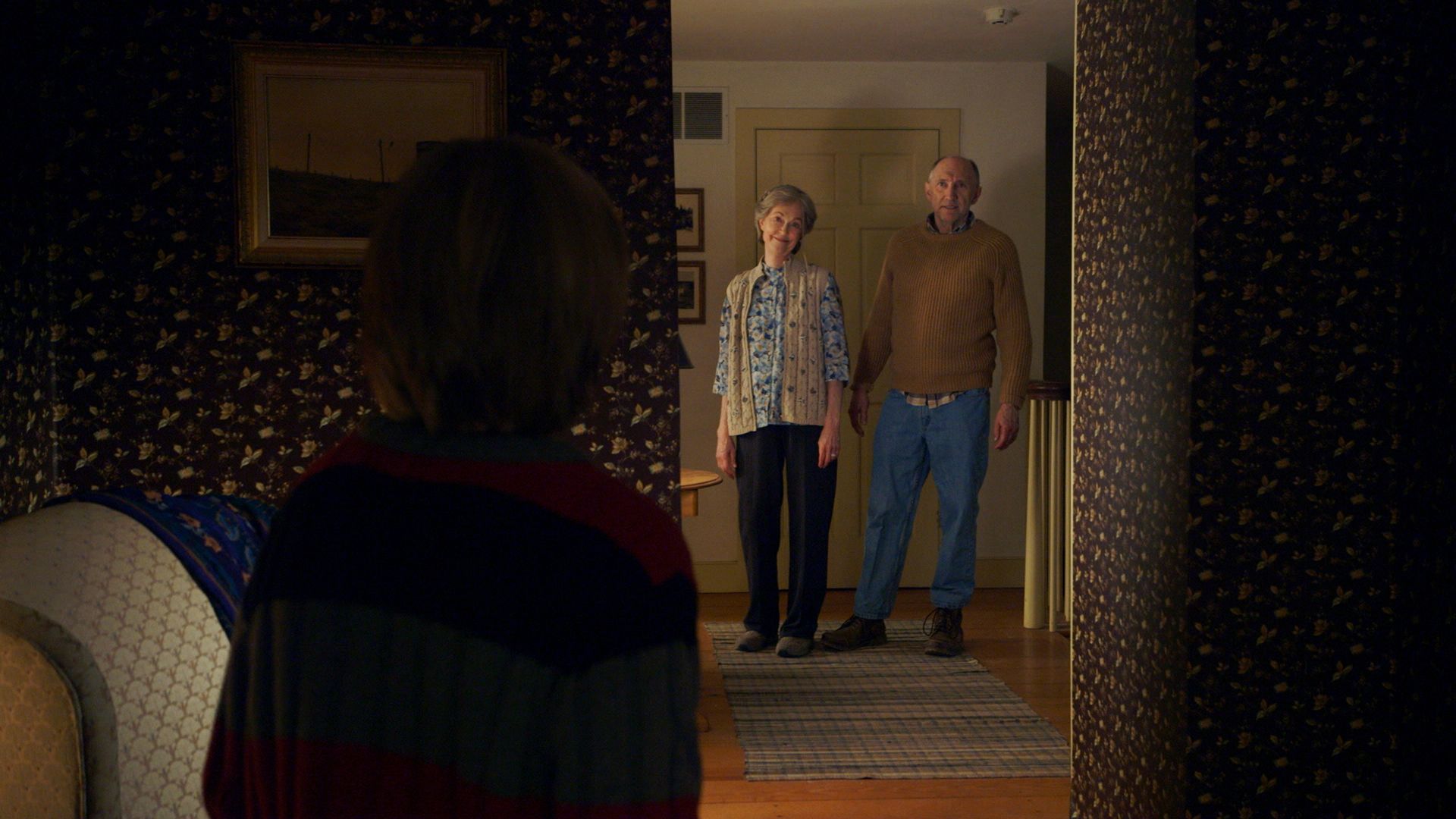 It’d seem impossible for a director to make a comeback if he was coming back from Lady in the Water, The Happening, The Last Airbender, and After Earth. Whether you can make a case for these movies1 matters less than the wider stigma — the vast majority is convinced they suck. Pair that impression with the general sense that their maker, M. Night Shyamalan, was some combination of Narcissus, Icarus, and posthumous heel-turn Steve Jobs, and you’re left with a portion of the moviegoing population actively rooting for someone’s misfortune in order to find pleasure in it — a sort of fore-schadenfreude.

As second lives go, Shyamalan’s The Visit feels like a lot of things: an emergence from bankruptcy, a prison release, extraction from a cult. The terms of his return feel court-ordered: no glop, no gas, no environmentalist revenge paranoia, no stars. He’s aligned himself with producer Jason Blum, a man whose output mocks a word like “prolific.” “Pathological” works better.2 Under the circumstances, the name of Blum’s company, Blumhouse, sounds like a haven for managed reintegration, which is basically the task before Shyamalan. Can he regain his form as a shotmaker, storyteller, and peddler of 11th-hour shock? And maybe more importantly, can he stay out of his own way as he does it?

Shyamalan wrote this movie about two teenage siblings who spend a week with increasingly weird grandparents they’ve never met before. Their permanently heartbroken single mother (Kathryn Hahn) is taking a vacation with a new boyfriend and lets the children go to rural Pennsylvania to meet her folks, whom she hasn’t seen in 15 years. It’s a stilted reunion. Doris and John (Deanna Dunagan and Peter McRobbie) are sometimes mentally present and sometimes catatonic. They volunteer at a mental hospital but haven’t stopped by in a few days. Some of their coworkers keep popping over to check on them, and the kids just shrug off most of the mystery. Throughout the movie, the days of the week stamp the screen in a flagrant red font, and the mounting anticipation makes you want to laugh.

But this never inhabits the realm of comic dread. It’s trying too hard. For one thing, the kids are obnoxious. Part of that has to do with what’s made a few Blumhouse assemblies hard to bear. The older one, Becca (Olivia DeJonge), is making a documentary of the trip. So when things get spooky and she finds herself trapped in a bedroom or a basement, she freaks out without letting go of the camera. Technically, this isn’t a found-footage film since the hours of handheld video are never lost, but it’s the same formal conceit of movies like Creep and The Gallows.

You can feel Shyamalan trying to make the most of a challenge — the way, on those cooking shows, a chef can turn stale bread and two rotten bananas into a blue-ribbon dessert. He’s found ways to open up the format. Becca’s brother, Tyler (Ed Oxenbould), has a camera, too. And at some point, both siblings go crawling around under the grandparents’ farmhouse, and in one shot you get a glimpse of a third person crawling toward the camera. It turns out to be Grandma Doris, who claims she was just messing around. What makes that scene tense is the cutting between cameras, a process so elemental I can’t believe I’m citing it as a surprise. But for found-footage that type of dynamic disorientation feels new.

The kids have a laptop they set up to catch their grandparents doing other weird stuff. That device aligns the movie with the surveillance-footage horror of the Paranormal Activity series. And Shyamalan finds a way to do something effective with that, too. But, really, you’re watching another gimmicky film. This one just happens to be by a director who knows he’s cleverer than most of the people who crank these things out. He’s still playing by many of the format’s rules. This handheld business robs him of his natural gift for suspense-building and skin-crawling framing. The movie doesn’t feel cheap. It just doesn’t have the nightmarishness a more exactingly executed, less on-trend movie would.

You also have to put up with Becca and Tyler. DeJonge and Oxenbould are two Australians playing Americans who act like they’re on a ’90s sitcom. They’re bright and chirpy and aggravatingly talkative. Becca holds a snooty reverence for nonfiction filmmaking while clomping her way through one of the more confused home movies this subgenre has seen. She sits down for one-on-ones with Doris, and when Becca promises her that she’ll be the star of the film, the old lady’s eyes get that Norma Desmond twinkle. Becca appears to think shots of her brother packing are more interesting than getting more footage of her grandmother sleep-vomiting.

Tyler fancies himself a rapper — he goes by T-Diamond Stylus — and is prone to break into freestyles that end with “’ho!” At some point he asks Doris, “Do you know who Tyler, the Creator is? Well, I got that kind of sound,” which would be true were Tyler a lisping jester with choppy flow. But Oxenbould goes all the way in on the character’s entitled bravura, which the writing keeps softening for sympathy (he’s been a germaphobe since their dad left) and comedy (when he means to curse, he uses a pop star’s name instead). That cursing device wore me down. Oxenbould does, too. “Jesus, Becca. I’m blind,” he says after seeing Doris scratching naked at a bedroom door. He’s selling this bratty part, and I bought most of it.

The whole movie feels like a director catching up with a culture that’s changed since his movies were near the center of it a decade ago. Shyamalan really thinks white kids rapping is a cute novelty. While Tyler does his thing on the train to their grandparents’ house, a black Amtrak employee beatboxes in his full uniform. For a moment I had to remind myself that Amtrak doesn’t also travel back to Shirley Temple movies. This also feels like a director catching up with himself. Shyamalan’s back to the idea of horror and the broken home (there’s a lovely shot of Hahn chasing the kids’ train while doing a mime routine that ends with her weeping). He’s back to The Plot Twist. The one here is hardly on par with the doozy of The Sixth Sense or, especially, The Village, which was the most provocatively bonkers as a director Shyamalan is ever likely to get. It does turn a generically creepy movie into something more concretely frightful. McRobbie’s Clint Eastwood carriage veers closer to Robert Englund and Tobin Bell, while Dunagan’s hamminess turns deviled fast.

It was fun watching this with a gasping and screaming audience. For horror-goers, the comparative competence must hit the spot. But there’s nothing new here — and what I sensed for 94 minutes was compromise, a director who concedes that spending time at Blum’s house might be the first step in getting back to his own. 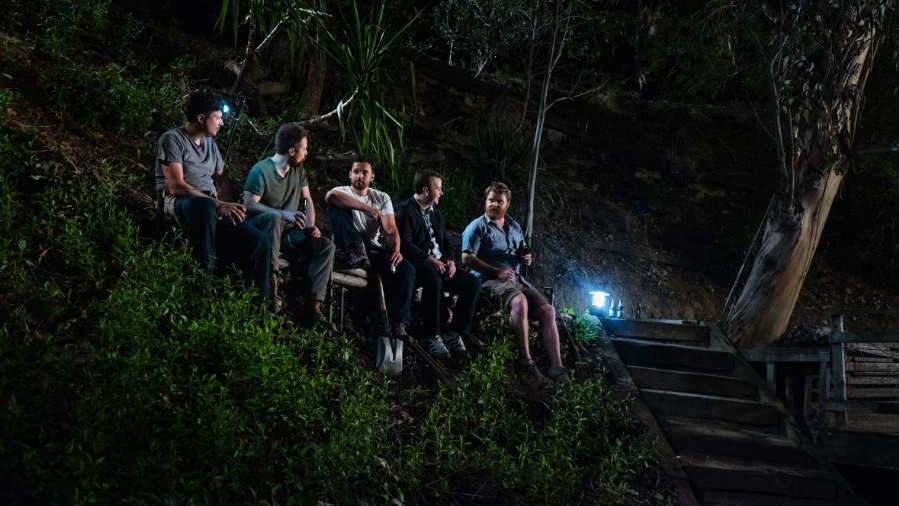 In Digging for Fire, Rosemarie DeWitt and Jake Johnson play an East Los Angeles couple with a 3-year-old son. It’s a movie about marriage that begins as a plaint against monogamy. Not much goes on. With some directors, nothing happening might occasion everything happening, speaking micro-emotionally. Not here. There’s a lot of drift and small talk and flirting and carousing, and that is that: a Snapchat of chill-class East L.A.

She’s a yoga instructor (the camera moves as though it’s at one of her sessions). He’s a public-school teacher. One of her clients has loaned them a sexy woodland cottage, but they don’t share it for long. She’s restless and frustrated with him — he said he’d do taxes that aren’t done; he won’t take her family’s money to send the boy to a good private school — and takes the kid to her mother (Judith Light) and stepfather (Sam Elliott), while he stays behind to party and exhume the dead body he’s certain is buried on the property. He’s already found a bone and a rusted gun, which licenses him to play detective. Her fantasy of a girls’ night out dies when the other girl (Melanie Lynskey) has to cancel. She winds up having dinner with a handsome stranger.

Johnson wrote the script with the director, Joe Swanberg, and there’s a loose, searching dimension to this movie that makes it easy to watch. The actors that traipse through don’t hurt, either. There are parts for Anna Kendrick, Sam Rockwell, Brie Larson, Mike Birbiglia, Chris Messina, Ron Livingston, Orlando Bloom, Jenny Slate, and Jane Adams, some of whom Swanberg’s directed before. But the movie lasts for only 85 minutes, and that’s not enough time for any particular feeling or idea to cling. There’s so much hunting here, not just for a corpse but for a movie. At 34, this is where Swanberg is. He began by doing lo-fi hangouts, and 10 years and 17 or so movies later, some kind of self-guided sensibility has begun to announce itself. He’s more comfortable now with story structure and characters and performances. The moment in which Lynskey breaks the news to DeWitt — nervously, with little eye contact — is lovely, and DeWitt’s work seems headed somewhere more trenchant than the warm, familiar place the character eventually winds up.

It’s just still hard to say why Swanberg is directing. It’s not for money or glory or even the cool of it (though he’s certainly attained that last one among a chic class of Los Angeles movie people). This is the most concentrated and conventional thing he’s done, and it’s difficult to tell whether he’s losing or finding himself. The movie has been dedicated to Paul Mazursky, the great radiologist of American social interplay who died last year. But Swanberg is still murmuring where Mazursky could speechify, gesticulate, and shout, sometimes in the same sequence. Hopefully, Mazursky’s name is more than a dedication for Swanberg. It’s a standard to meet, a beacon to follow.