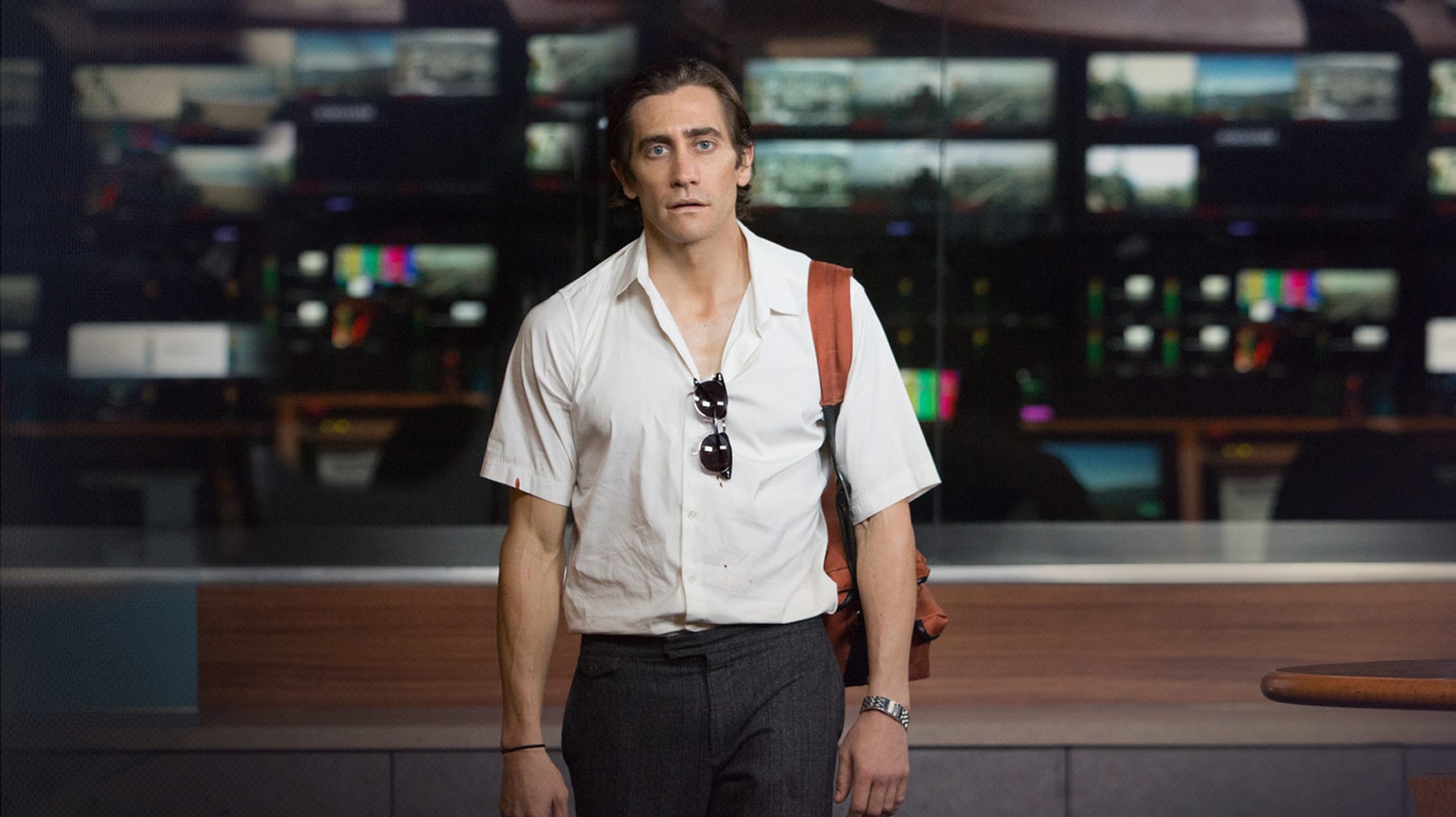 In Nightcrawler, Jake Gyllenhaal assumes the stiff alertness of someone who just landed on this planet. He’s wiry and gaunt. His skin is a light brown. He’s either dirty or tanned. (The movie is set in the Los Angeles area, where hot-and/or-homeless is a game to play.) In moments of excitement, his balloon-y eyes inflate. The weird grifter he plays, Louis Bloom, pries his way into a career as a freelance crime-scene cameraman. By the film’s estimation, it’s not an inherently ethical profession. After Louis gets the hang of the job (he’s a quick study), he thinks he’s making art. One night, he drags a body from behind a crashed car, and you can see the helium fill his eyes. He’s concocted a beautiful shot. It’s an uncomfortable, private moment, like watching Marty Feldman have an orgasm.

The movie, written and directed by Dan Gilroy, is full of bizarre invasions of privacy. Louis and his competition (mainly a jaunty veteran played with typical gusto by Bill Paxton) hear of accidents on police scanners and show up at car crashes and murder sites lugging cameras and lights, ideally before the LAPD has arrived, and encircle it until they’ve absorbed a suitable degree of atrocity. When they have to share the scene with police, the object — menace notwithstanding — is to remain unobtrusively observant: vultures on a wire. They take in the wreckage and the gore, then race to a willing news outlet. Louis gets his foot in the elevator door of KWLA, a struggling network affiliate with a vampire’s sense of news judgment.

Spiritually, Louis is a sales guy who speaks in platitudes. “If you want to win the lottery,” he tells one uninterested potential employer at the start of the film, “you have to make the money to buy a ticket.” Gyllenhaal delivers most of his lines with the self-promotional directness of an actor in a get-rich-quick infomercial. But the sentences come so fast that the words mean less than the air of threat that accompanies them. There’s something certainly off about Louis.

What his venality needs is a complement. When the indomitable, put-together KWLA news director, Nina (Rene Russo), tells him what she’s looking for in a good video package (basically: graphic crime committed by poor and/or brown people in affluent white neighborhoods), Louis knows he has found a soul mate. He’s not a killer, but he’s not above leaving someone to die for a story, and his immorality facilitates her amorality. She loves his work and lets him seduce her. The relationship makes some sense: They both believe in transactional relationships. He wants her to hire him permanently. She seems impressed but constitutionally wary. Her skepticism is a form of arousal. But Louis always has the upper hand. Nina comes to rely on his smutty video packages and is fortified by the nauseating brew they share: profit, attention, tragedy. When Nina asks Louis why he waited so long to show her his masterpiece (a home-invasion triple murder), he answers: “To increase your need and improve my bargaining power.”

Nightcrawler strains for intelligence. It’s Gilroy’s first film as a director, but he’s not new to the movies. He’s been writing screenplays since the early 1990s. Russo is his wife. His brothers Tony and John make movies (Tony helped produce this one). Nightcrawler is polished without being slick. That’s a tender distinction, but Gilroy seems to understand it. He’s after some kind of thematic indictment of news and technology and entertainment. That lack of slickness — the eerie air — keeps the film from turning all the crime scenes sexy.

But there’s a tidiness that tamps things down. Gilroy draws a moral line and keeps devising ways for Louis and Nina to cross it. The control room scenes between her and her horrified fellow producers (Ann Cusack and Kevin Rahm) get funnier and more appalling as the movie goes on. There’s a kick to watching Nina defend her addiction to Louis’s work. But generating tension along that line gets tedious. The audience knows where it is without needing to be reminded that it’s there.

Louis brings on a young intern named Rick (Riz Ahmed) to help deal with parking and directions to crime scenes. Rick’s desperate for money and therefore docile. He’s pure and nervous and, initially, prone to screw-ups. His purity, though, remains intact, even when bargaining for a raise and title change. It’s meant to stand in opposition to Louis’s widening deviancy. But the good-bad tension turns the contrast into an uninspired device, particularly once Louis and Rick stumble onto a scene long before the police do. This Dark Knight doesn’t need an Alfred.

The seedy, surveilled atmosphere of Nightcrawler has a gravitational pull. Every time Louis pulls up to a crime scene, your stomach tightens. What’ll be his next transgression? Louis gazes up at the KWLA tower — played by KTLA’s — until it attains the ersatz showbiz eeriness of something on the Vegas strip. The montage interludes of radio towers, flashing lights on the city grid at night, telephone poles, satellite dishes, coaxial cable hanging on the side of a house are reminders that the movie’s world is wired for watching and listening (and probably listening in).

The mood is foreboding enough, but Gilroy either compounds or contradicts it with music. The score is by the prolific veteran James Newton Howard. It sounds like the music from Heat and hangs over the movie like smog. The problem with these star composers is that you have to use what they come up with whether or not it makes sense for the film. It’s the equivalent of buying too much of something at the market and feeling compelled to use it all. With Nightcrawler, you’re eating strings for a month. You don’t feel comfortable with a director who let the score do this much of the work for him.

Howard’s intrusive score enhances the sense that Nightcrawler is a movie and nothing more. Which is fine, of course. But the movie’s movie-ness makes you aware that a statement is being made without articulating what it is. What Gilroy doesn’t get — and this needs craftsmanship, honed skill, and instinct — is how to do an action-thriller that is a farce. Or maybe an action-thriller shouldn’t be a farce, although Luc Besson has succeeded in the attempt. Paul Verhoeven also managed that balance with RoboCop, where the action and the media satire fueled each other, and much of David Cronenberg’s film career has been a steadily sideways consideration of media culture. Some of the best ideas in David Fincher’s Gone Girl have to do with the media-ready crime and the TV-news personalities that dine out on it. They just don’t interest him nearly as much as the horror-comedy about marriage.

Gilroy, on the other hand, is committed to two conceits: that this cul-de-sac of American journalism is scary and perversely funny. He just isn’t capable of managing both at once. Not far from the finale, something awful happens that should be both disturbing and darkly amusing but is neither.

Nightcrawler is full of the offspring of the cynics, opportunists, and gargoyles of Network, a premonitory farce of television news and entertainment. What airs on the local outfit in Gilroy’s film is an exaggeration of what you might see kicking off the 10 and 11 p.m. news. Gilroy and his team have a good time with the headlines and teases they attach to the packages, which are presented as a comic montage. During the broadcast of Louis’s masterpiece, Nina is goading her two anchors to goose up their narrating of the horror footage. “Hit harder,” she says. Maybe she should be making this film, because Gilroy doesn’t trust when to hit harder himself. The film is ultimately reined in, the cynicism sedate and predictable. When Louis happens upon one of his first crime scenes, Paxton’s character blows past him, actually saying, “If it bleeds, it leads,” as if the gore we see debated at KWLA doesn’t speak for itself.

I couldn’t have predicted most of Louis’s action in this film, but not much of it surprised me. His eyes seem popped on our behalf. The character is a sicko, but he’s a high-functioning one. That’s where the farce in this movie is — that Louis is not only able to perform a sick job because he is sick, he’s also capable of thriving in it as a businessman. The movie couches its capitalist satire in a gradually tired nightly news thriller. But Anchorman gives you a sharper angle at jabbing into that world.

The acting keeps things interesting. Russo could have gone for Faye Dunaway in Network, even if that’s not what the part calls for. But she knows she can’t hit those notes of volcanic eruption, so, mostly, she plays it cool, which makes the character seem saner than she actually is. It’s lucky for Gilroy that Riz Ahmed actually does seem pure. He’s the best thing in the movie. He has a crackling energy that can catch you. There’s a goodness and gentleness in him — youthful principle; naïveté — that you don’t want the job to snuff out. It’s what you felt when John Cazale was around. All of Ahmed’s scenes are with Gyllenhaal, who, in contrast, seems to get a lot of pleasure out of showing off all the work he’s done for this performance.

The movie seems proud of it, too. There are cutaways to Louis watering plants in his apartment, ironing from his sofa, cracking up at something Danny Kaye does in The Court Jester, which is playing on Louis’s little TV. What Gyllenhaal evokes in some of these scenes is Peter Sellers’s “Chance the Gardener” in Being There, which was also about a savant with a warped relationship to television. Being There’s famous line is “I like to watch.” (I’ll let someone else deepen any parallels between “Gardener” and “Bloom.”) Along with Gyllenhaal’s parts in last fall’s Prisoners and this winter’s Enemy, Louis is one of his fascinating cool-dude weirdos. (When he ties his hair back at a crime scene, he looks like a Japanese hipster.) Gyllenhaal can appreciate that he’s not a conventional star, and there may be no acting challenge in stardom for him anyway. He needs psychology to play. Nightcrawler might give him too much. It’s like he’s been cramming for greatness. But there’s a crazy spark to him here nonetheless. The performance captures the delusion of talent. Louis is a carrion maggot who’s mistaken himself for Weegee.