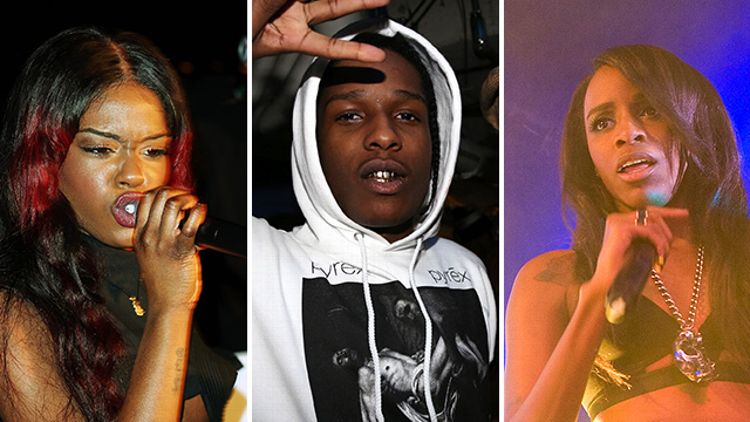 Calendars turn, but rap beef knows nothing of space and time. It was just three days into the New Year when the first feud of 2013 began to roil. The inciting incident, because this is 2013, was a tweet. On January 3, Azealia Banks, the fashion-fetishized rapper from Harlem, sent out the following missive:

Seriously, if you were not born and raised in NY…. DON’T CLAIM NY. YOU ARE NOT A NEW YORKER.

For those seeking a follow-up, Banks was kind enough to clarify for the Saratoga set. What does a region-claiming message like that mean? In the context of Banks’s frenetic, self-mythologizing Twitter feed (aren’t they all, though), probably not very much. Azealia Banks prides herself on arch-trolldom. But what is social media for if not unverified assumption and rash response? So Angel Haze, another young female rapper with a rising profile, took the bait. Last year, Haze released a song called “New York,” a hard-edged, quick-tongued trio of verses over Gil Scott-Heron’s “New York Is Killing Me.” Haze, born Raykeea Wilson, grew up in Michigan. She lives in Virginia. Was Banks slyly alluding to Haze, thought to be a friend in the industry, if also perceived competition? Maybe she was. Haze certainly thought so. So she released a dis record later that afternoon.

It’s a vicious thing, both specific and vague about the Twitter subliminal — Banks hinted later that evening that the song had been in the can for some time and Haze had been planning an attack. Haze denied that. Banks responded Thursday night.

The result, “No Problems,” is even less specific — mostly it’s a lot of low-toned tough talk layered over a dissonant beat by the producer MACHINEDRUM. Ho-hum. (It should be noted that at one point during this skirmish, Banks tweeted at Perez Hilton, calling him “a messy faggot,” in a since-deleted tweet. This sparked its own set of thoughtful response. This is a complicated story.)

Haze responded again on Friday with the succinct “Shut the Fuck Up.” It is the “Supa Ugly” of this beef, the over-the-line moment that doubled as the least artful moment. Since then, things seem to have cooled, though this played out in thoroughly modern fashion, with speed and a modicum of transparency. Rap beef is just a click away.

But what were Angel Haze and Azealia Banks really tussling over? The opportunity to claim New York City as their Sparta? That would be a mistake. New York has been rap music’s event horizon for more than a decade — light can enter, but it rarely escapes. What’s really stirring beneath their saga — the intimations of a romantic relationship unrealized (Banks is bisexual and Haze has said she “embraces gender-fluidity”); the ongoing struggles and limited opportunities for female rappers to crack into the mainstream; the inconvenient certitude of Twitter; two mean girls turning on each other — is almost immaterial. It’s New York as the germ that makes this a strange story. Pride and local ownership are prized in rap’s value system. But those values are eroding.

Nowhere is that more clear than in the music of another aspirant from Harlem, A$AP Rocky. His long-awaited and long-delayed album, LONG.LIVE.A$AP, will be released next week, though it’s been, well, available since December. In some ways, it’s a seamless continuation of LiveLoveA$AP, the 2011 mixtape that announced Rocky to many. What was bracing about LiveLove was its stunning coherence — for a first-swing mixtape, it’s as assured as you can get — as is its cattle call of sounds. Rocky’s laconic flow vacillates from DJ Screw–inspired Houston slow flow to Bone Thugs-N-Harmony’s syllable-stuffing Cleveland sing-song to the sproingy stutter-clap of contemporary Atlanta. The music obliged the locale-hopping, transitioning from syrupy Texas roll funk to shimmering Pandora beats by Clams Casino. Rocky claims Harlem in interviews, positioning himself as a natural descendant of the “pretty motherfuckers” that comprise its flashy history, from Bumpy Johnson to Frank Lucas to Alpo Martinez. But his taste for opulence and extravagant gestures extends beyond the local — he’s a globalist. As such, Rocky is probably the most aggressively fashion-forward rapper of his or any generation, brandishing Maison Martin Margiela and Balmain pieces in unlikely places. His video for “Goldie” was styled by Alexander Wang, where Rocky can be seen cruising in a convertible under the Eiffel Tower. In 2012, he co-starred in a gorgeous, empty video with Lana Del Rey appearing as a stand-in for John F. and Jackie Kennedy and family. “We used to wear rugged boots, now it’s all tailored suits,” he raps on “Hell.”

Rocky is unlikely to record a hometown pride anthem because it would corrupt his worldliness. Sitting on the block with his friends — the “sophisticated goons” of A$AP Mob — would be far less fun than jet-setting in drop-crotch pants. It means less, too. His new album features not one but two posse cuts featuring artists from all the map. That Rocky and LIVE.LOVE offer diminishing returns — it’s become clear that Rocky is great at image and lacking in story — from that first hit of excitement two years ago is no surprise. Globalization tends to tarnish personal narrative. But it earns. Angel Haze and Azealia Banks are presently content to squabble over a city. Rocky wants the world.