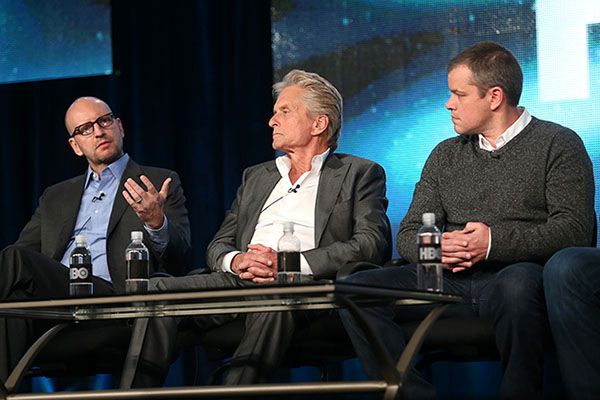 Amid all of the secrets and lies being spilled at the Television Critics Association’s winter press tour are highly intriguing reports about Behind the Candelabra, the long-in-the-works, “too gay for Hollywood” Liberace biopic that Steven Soderbergh was finally able to get made thanks to HBO. Critics were treated on Friday to “a lengthy first look” at the movie, which is about the scorchingly flamboyant entertainer’s turbulent affair with his much younger assistant Scott Thorson. Vulture reports that Michael Douglas “disappears into his role” as Liberace, whose involvement with Thorson (played by a blond mop-topped Matt Damon) eventually ended in a highly publicized palimony suit. The preview included clips of Douglas and Damon making out by a pool and bickering at home in bed, as well as Douglas consulting his plastic surgeon (played by Rob Lowe, “whose eyebrows were arched to a stunning extreme for the role”) about how to make Thorson appear more Liberace-like.

Soderbergh told reporters that he took Candelabra to HBO only after he failed to find studio backing, in spite of the involvement of two major stars and a small $5 million budget. “They said it was too gay. Everybody. This was after Brokeback Mountain, by the way. Which is not as funny as this movie. I was stunned. It made no sense to any of us.” Perhaps this contributed to Soderbergh’s decision to “retire” once Behind the Candelabra airs this spring, though he says he’s glad the project ended up on HBO. “They’re great and they’re really good at what they do, and ultimately I think more people will see it, and that’s all you care about. Studios were going, ‘We don’t know how to sell it.’ They were scared.”

Even with the sky-high camp potential of the material (and Soderbergh’s “funny” comment), Candelabra appears to be very juicy Emmy bait. Damon promises that the film has plenty of heart beneath all of the sequins, says Entertainment Weekly. “If this was a relationship between a man and a woman, you’d feel at moments like, ‘This is too intimate, maybe I shouldn’t be here.’ But it’s between a man and a man, and I’ve never seen that movie before,” Damon said. “And so it was fun, but we weren’t giggling about it. We took it very seriously. These were people’s lives, and we wanted to get it right, and we wanted to get the script right.”