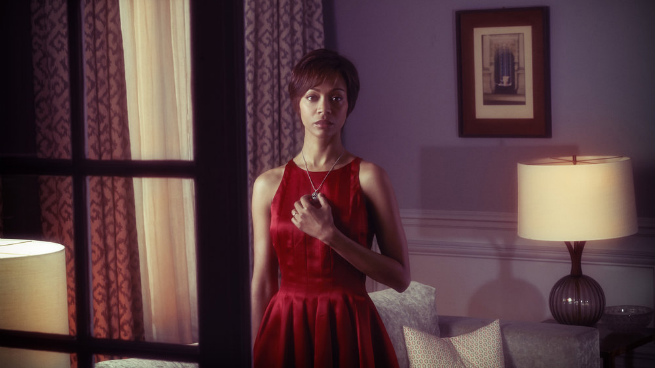 While long-form television’s ability to draw out stories over hours has mostly been seen as a good thing, longer isn’t always necessarily better. Take, for example, NBC’s reimagining of Rosemary’s Baby, which expands on the 256-page book and 136-minute Roman Polanski movie adaptation with a two-night event that premiered to fairly dismal ratings on Sunday. Part 2 airs tonight, and while it will likely go down as a failed experiment for the network, it’s actually quite a promising sign of progress for network TV movies. Had it been condensed into a one-night TV movie, the Rosemary’s Baby reboot could have been much better. As it is, it’s less terrible than you think.

Director Agnieszka Holland is a Czech new-wave film veteran who helmed several episodes of The Wire and Treme. The script is by James Wong (The X-Files, American Horror Story, Final Destination) and Scott Abbott (Queen of the Damned, Introducing Dorothy Dandridge), who clearly have an intense respect for the original material and want to do well by it. The Rosemary’s Baby miniseries hews much less closely to the book than Polanski’s extremely faithful film version. But if you’re going to remake a classic you have no chance of matching even before you start, why not mix it up a little?

And so Zoe Saldana’s Rosemary Woodhouse and her husband, Guy (Patrick J. Adams), are living in an apartment building in Paris, rather than New York. Guy Woodhouse is no longer a struggling actor, but a struggling writer and professor. While Polanski’s Rosemary’s Baby was psychological horror, this Rosemary’s Baby is more in the giallo tradition. With its European setting, bloody flies, and secret cabal of witches, it feels like something Dario Argento might have made. The evil Castevets, previously portrayed as grotesques with an ethnic overtone, are now high-society Euro-trash. This moves the new version away from some of the Polanski film’s primary themes dealing with privacy and neighbors — here, the Castevets represent the promise of success and improving your social ranking. The Castevets seduce the Woodhouses, specifically Guy, into an aspirational lifestyle the latter family can’t yet afford. Minnie, named Margaux here (Carole Bouquet), makes tannis-root kale smoothies for Rosemary. Roman Castevet (Jason Isaacs) encourages Guy’s stymied career as a writer, which suddenly starts to blossom as Rosemary’s pregnancy turns sinister. The Castevets seem like they are trying to get the Woodhouses to consider swinging, which, in a sense, they are.

Polanski’s Rosemary is built on long, paranoia-filled shots that draw out the tension and dread of harboring a demon in your body. Holland’s Rosemary is engineered to be a TV movie, which means the thrills and cliffhangers come predictably at commercial breaks. The scenes of exposition drag on for too long. They show the baby’s eyes, the worst mistake you could possibly make, since the audience’s horrific inference is what makes that infamous sequence work so well.

Following the cult popularity of Hannibal, it appears NBC may be looking further into the horror business. And the same goes for Saldana — horror is a genre with a lot of female protagonists, and I don’t blame her for going where the substantial female roles are. Saldana’s Rosemary begins as a self-assured woman, and then descends slowly into hysteria, and there’s a lot more gore than you might expect. Still, every time Rosemary’s Baby works up some spooky steam, the periodic cliffhangers break the spell.

In the entirety of the Rosemary’s Baby canon, the NBC miniseries belongs alongside 1976’s Look What’s Happened to Rosemary’s Baby, directed by Sam O’Steen (who edited Rosemary’s Baby and The Graduate). It’s not quite campy enough to be flat-out hilarious, but it’s not freaky enough to be genuinely terrifying, either. But it has its moments and clearly honors its source materials. There are a couple of really good scares, and the novel’s themes are too interesting to ever be dull. Motherhood! Success! Satanism! It’s still as potent a spell now as it was 46 years ago.

Straight to Video: Will 'Godzilla' Live Up to the Hype?