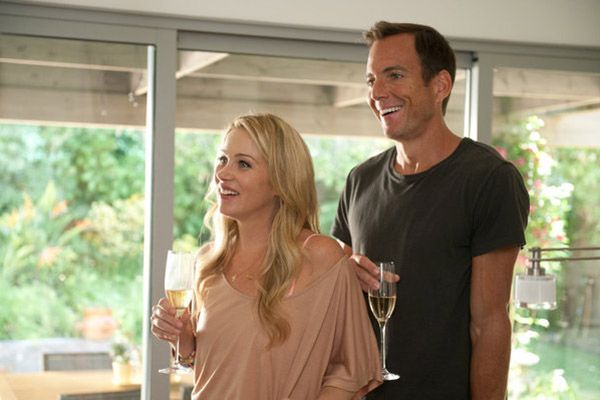 As the 90 mph winds of Hurricane Sandy swirl and rage outside my apartment, my thoughts are with another disaster — one entirely man-made. Up All Night, NBC’s frustrating ode to yuppie entitlement, is the little sitcom that wouldn’t. After 30 episodes, this star-studded baby-com remains frustratingly immature, saddling likable leads Will Arnett and Maya Rudolph with stakes lower than a Smurf’s limbo pole: the invitations of an overeager foodie college friend, a sentimental attachment to a mug, Stevie Nicks’s mild dislike of a dog. This season, showrunners Tucker Cawley and Emily Spivey sought to address the malaise by introducing Luka Jones as a slothful brother-in-law so unmemorable I still couldn’t tell you his name.

Now NBC is also crying uncle — though in a very different way. According to a report by Jon Weisman in Variety, the network is taking the rare step of shutting down production for three months in order to rework the show as a multi-cam sitcom. Though drastic, the move isn’t entirely unprecedented: Weisman notes that it had been done decades ago with Happy Days (presumably before Fonzie went shark-jumping) and that a similar switch almost happened to Christina Applegate’s previous vehicle, Samantha Who?, in 2009. According to Weisman, the network hopes the rejiggering will take advantage of Rudolph and Applegate’s recent turns in front of live audiences on Saturday Night Live. One can also assume that network boss Bob Greenblatt sees this as a way to wedge Up All Night’s decidedly edge-free subject matter into his newly broad aesthetic. (Real talk: The show has always been a laugh track away from being Guys With Kids With Better Furniture.) The biggest upside isn’t just that I will get a break from recapping this show on Thursday nights beginning in January, it’s that the tinkering also opens up a very logical time slot for the benched Community, a much better comedy that should have no trouble matching Up All Night’s (terrible) ratings.

If this all seems like shuffling deck chairs on the Titanic, you’re probably right. Personally, I’m reminded of that scene in The Abyss in which Ed Harris refuses to stop pounding on Mary Elizabeth Mastrantonio’s chest, even though her heart stopped ages ago. Of course, in that example the patient comes roaring back to life. Up All Night 2.0 might have a shot at a similar miracle resurrection if it had incurred any goodwill or creative momentum during its first go-round. As is, this feels like giving a face-lift to a corpse. I expect that Arnett, Applegate, and Rudolph — not to mention baby Amy — will have plenty of time to catch up on their sleep soon enough.