Nas Returns With ‘The Don’ 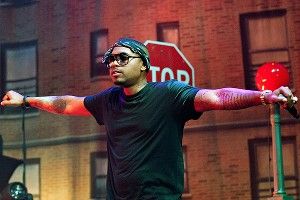 “Super-consistent singles artist” is turning out to be a pretty good look for Nas. “The Don,” the second quasi-leak off Life Is Good (his 10th album, supposedly the last one he owes Def Jam, release date as usual an ephemeral abstraction), is more barreling ‘90s-style fast-rap in the vein of “Nasty,” from last August. That’s a one-hot “Made You Look”-esque-banger-every-eight-months average! (It’s interesting how, after being defined for almost two decades by his willingness or refusal to validate our nostalgia by reminding us of the kid who made Illmatic, the moment he chooses to consciously evoke now is 2002 — although there are way worse templates to build on than “Made You Look,” the highlight of the muddled retrenchment-move God’s Son, right down to that hook, a whole yearbook photo’s worth of dudes yelling Braaaaaavehearts from a roof, as if to scatter pigeons.)

Except whereas “Nasty” was minimal — just Nas, riding a beat like a man breaking in bionic legs on a treadmill, lusting after “the actress who played Faith Evans,” and sounding more than half-amazing for the first time in years, plus a few Godzilla-stomp horn blasts as punctuation — this one’s hectic, hooked around a sample of Super Cat’s ‘80s dancehall 45 “Dance Inna New York” that loops car-alarmishly under Nas’s brisk, casually masterful rap.

“Nasty” and “The Don” have a generosity of spirit that feels new; Nas seems like he’s in a good mood for the first time in forever, rich and girl-crazy and 38 years young. The longish list of producers who laid hands on this includes Salaam Remi, who did both “Nasty” and “Made You Look,” but Nas tips us off to the track’s real author: “Although he’s on to another chapter/Heavy D gave this beat to Salaam for me to rap to.” The Big Belly Gorgon with the assist from beyond the grave! Then, for just a second, in come the buttery retro keyboards, Nas calls New York City “an island/A big Riker’s Island,” and it’s basically the best thing that’s happened all year; I usually start over from the beginning at that point, just so I can get there again. “Nasty” featured both the best simile of 2011 (“Your flow cheap as limousine liquor”) and a daily affirmation worth taping to the bathroom mirror: “I’m not in the winter of my life, or the beginnin’ stage/I am the dragon”; on “The Don,” that live-in-the-now sentiment gets distilled down to the more succinct “Fuck sadness.”

The spoken prelude is from a 1992 interview Super Cat gave while visiting Yo! MTV Raps with Heavy D; I love how baffled Ed Lover is by Super Cat’s patois around 1:40, and how amused Hev obviously is by his confusion, although obviously the real highlight is Super Cat’s matinee-idol mustache.

Trailers of the Week: Battleship, The Three Stooges, On the Road, and More