My World-Conquering Book You’ve Never Even Heard Of: Me Before You, by Jojo Moyes 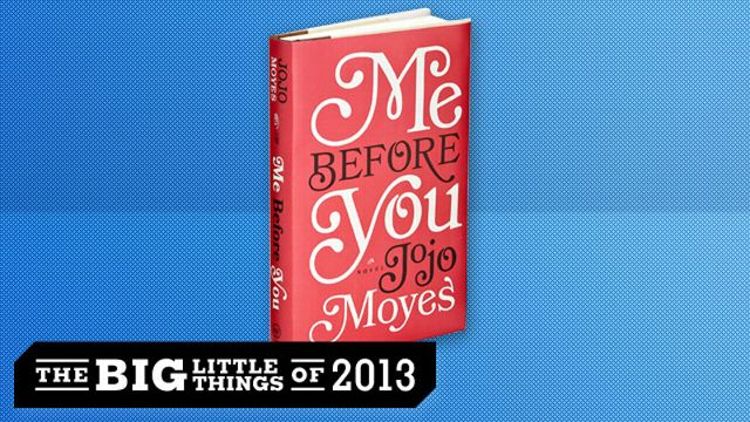 Back in January, I wandered into a Barnes & Noble to see what new fiction the store was promoting on the tables up front. The combination of well-received paperbacks and new publisher-promoted hardcovers generally yields at least one find for me. That day I stumbled upon Me Before You, by Jojo Moyes. Most of the books found on those tables are there because the publisher has paid for placement, so it was less discovery and more successful marketing. Nonetheless, I was like Alice in a personal Wonderland. Me Before You is the special kind of book that makes me want to stop reading novels. The experience of reading it is so total and galvanizing that, when you’re done, it’s hard to imagine that any other novel could be as immersive. It turns out that I’m not the only reader to have had this experience.

Pamela Dorman Books/Viking published Me Before You on December 31, 2012. So, technically, it was a very little thing from last year based on length of availability alone. But it became a big something in 2013. Despite a quiet entrance into the world, Me Before You has become a runaway bestseller. The thirst for Moyes provoked the publisher to release another one of her books just eight months later. She is my author of the year, and I’m betting you’ve never heard of her.

Moyes began her career as a journalist in the U.K., and this breakout novel is actually her ninth. It tells the story of Louisa Clark (she goes by Lou), a twentysomething, lower-middle-class Englishwoman in desperate need of work. She finds employ as the non-medical caretaker of a thirtysomething quadriplegic named Will Traynor. He is very rich and lives in an estate in their sleepy English city. You can probably guess where this is going. There’s a romance, an unlikely love story, and some intermittent laughs. If I’m strictly describing the plot, comparisons with the works of Nicholas Sparks, Jodi Picoult, and other writers of “chick lit” are unavoidable. But the forthcoming movie version of this novel definitely could not be filmed on the dreamy beaches of North Carolina. Will and Louisa’s England is a cloudy and chilly place defined by their practical challenges. This is where the book’s power emanates from: Every character is woefully realistic, keenly aware of obstacles. The central relationship is tear-jerking stuff, but it’s also a vehicle for exploring England’s class issues and the limitations of personal expectations. Liesl Schillinger said it best in the New York Times: “When I finished this novel, I didn’t want to review it; I wanted to reread it.” Though it’s hard to read this book without crying, moving on from it also felt like an impossibility. The end is a rude ejection from a world I’d be happy to live in, or read about, in perpetuity.

So far, Me Before You has been published in 28 countries. The first hardcover edition was a Times bestseller, and the paperback is still hanging around on the trade bestseller list. The movie adaptation is moving forward. Moyes herself wrote a first draft of the script, and novel-adapting regulars Scott Neustadter & Michael H. Weber are now working on it for MGM. But I still can’t quite grasp how this book became so successful. Reviews from the Times and USA Today were great, but do two reviews account for more than 500,000 actual books and over 250,000 e-books sold? (Those figures are from early 2013, so surely they’re higher now.) Moyes hardly registered on the NPR radar at any point this year, save for a Leonard Lopate interview to promote her second novel of the year, The Girl You Left Behind. (I read this one, too. It’s good for the bereft MBY reader, but the sense of loss afterward is not as strong. Maybe that’s a good thing.) She’s reserving real estate on NPR.org, but I can’t imagine what else Moyes needs to do to get some words written about her there.

Maybe the success of Me Before You is a testament to the value of GoodReads and that community’s ability to sell books. If it had been published just one day later, on January 1, 2013, it would have been the seventh-most popular book on GoodReads’s list of books published in 2013. The Cuckoo’s Calling, by Robert Galbraith, currently clocks in at seventh with 129,622 “adds,” while MBY comes in 21st on the 2012 list with 129,938 “adds.” It has 57,422 ratings and 10,990 reviews, for an average of 4.35/5 stars. The general consensus is something along the lines of “still sobbing!” and “not a romance!” But still, does this account for the worldwide dominance?

Me Before You‘s most impressive feat is its analog life. The conversation about the future of book publishing has been nihilistic, and static, for many years now. But Moyes’s novel seems to contradict conventional wisdom. There was no viral book trailer, and Moyes is not particularly social media–savvy (I did learn about the Great British Bake Off from her Twitter feed, though). She doesn’t even participate in the GoodReads Author Program, through which writers can promote themselves. The book’s most significant engagement with the Internet is its own plot. Lou uses a message board to help Will. The online community that Lou relies on facilitates a richer offline life. It’s almost too perfect that an author whose characters are enamored with the value of human contact and new experiences succeeded mostly thanks to word-of-mouth recommendations and book group sales. There’s solace in knowing that the solitary experience of reading a devastating book is being replicated all over the world, and it’s not because some machine planned it this way.