My Eyeball Performance of the Year: Orange Is the New Black’s Crazy Eyes 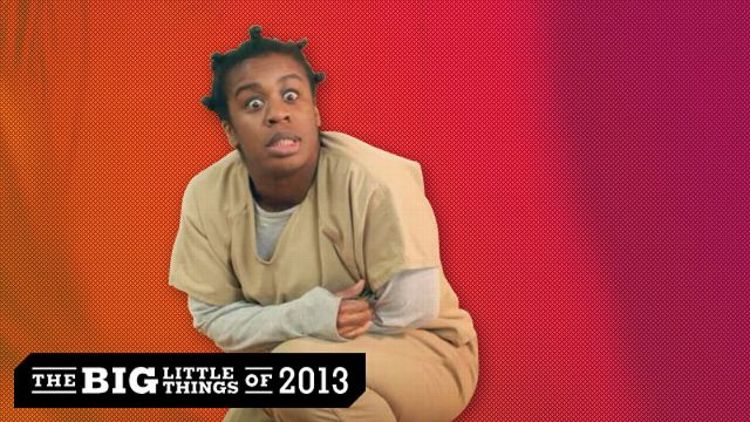 Choosing my favorite eyeball performance of the year was not as easy as it sounds (and here I should note an honorable mention for Eastbound & Down‘s Stevie and his sky-blue color contacts). After all, what would the Amy’s Baking Company saga have been without those two liner-rimmed orbs of intensity that promised to drag you into hell’s fiery belly if you locked onto them for too long? Look at them. Just look at them. OK, that’s enough. Shhh — she can’t hurt you now. Amy’s outbursts on Kitchen Nightmares wouldn’t have been nearly as noteworthy if not for her eyes — I might have assumed she was pretending to be a villain in an effort to drum up the maximum amount of bad publicity (I don’t know why anyone would do this, but I also don’t know how anyone could behave as Amy did), but the eyes don’t lie. They weren’t swirling-vortex crazy eyes, because there wasn’t a lot of activity going on behind them. They were still, motionless, and they promised danger, like little bear traps.

Anyway, this year’s prize was snatched from Amy by Suzanne. The main threat of a crazy eye is that it will become trained on you. That’s probably why we so often use it to describe suitors who will not be denied. Eyeball anomalies due to actual physical ailments should never be associated with the term “crazy eyes,” because the phrase has to entail misguided or malicious intent. In high school, our own Molly Lambert noticed that I was a crazy-eye magnet and suggested it was because I had an “open face.” (Perhaps the opposite of “bitchy resting face,” this is an expression that invites other people to sidle up to you and confess their crimes or ask for five dollars.) This didn’t mean I got a lot of offers to accompany weirdos to semiformals; it just meant that if we happened to find ourselves at the Third Street Promenade and there was a roaming group of cult members or one lone woman with a jar of her own earwax in her purse, I was probably going to become trapped on a bench with them. I developed a crazy-eye radar system, a beeping only I could hear as they came nearer, just so I could be prepared. I didn’t avoid them, though, because the truth is, I like crazy eyes. I think they’re exciting.

Taylor Schilling has the openest of faces, and as Piper on OITNB, she has an open personality to match. It’s not that her guard is always down, it’s that she has no guard (which is partially why she’s in prison to begin with). This makes her the perfect target for Suzanne, whose loneliness and neediness drive her to pursue Piper relentlessly. Suzanne has feelings — love feelings — and unspecified mental illness(es) that should have probably landed her in a different kind of institution. Suzanne’s eyes are crazy in every sense of the word: She’s got the razor focus, the penchant for buggin’, and if you try to escape, she’ll piss on your floor. Those eyes cry every night for you, and you’d like to stuff them with paper towels to get them to quit. But Suzanne is trusting — somehow just plain good — and she quickly became my favorite character even though she’s the one I’d least like to be marooned with on a desert island (or in a jail cell). Hook me up with Yoga Jones for that.

Julianne Hough made the mistake of wearing blackface when she dressed as Suzanne for Halloween. After she was inevitably slammed, Hough apologized on Twitter, explaining that she was “a huge fan of the show Orange is the New black, actress Uzo Aduba, and the character she has created” and that it wasn’t her “intention to be disrespectful or demeaning to anyone in any way.” Hough would have been recognizable as Crazy Eyes without her ill-advised deep tan — she was working her peepers pretty well — but she just didn’t trust herself. She screwed up what would have been a great homage to the hottest eye trend of 2013. (Amazingly, spray-on magenta contacts never caught on, but I’ll check back in for the Eye Awards Ceremony in 2016.) She just wanted her chance to walk the runway.

Aduba’s unique talent for performing the crazy eye is only one aspect of her stellar portrayal of Suzanne, but it’s pretty remarkable to fake what’s usually assumed to be inherent. In a discussion thread about encountering the crazy eye on dating sites, a user opined that “every woman whose eyes had that wild, slightly preternatural look to them always turned out to be psychos, even when I willed myself to ‘give them an honest shot’ (just in case, you know) … I think it has to do with a certain level of anxiety the crazier ones carry aroun[d] with them. The world is a suspicious, dangerous place to them, and they seem (as a general trend) to view it as a ‘hunting ground’ for suckers.” That may have once been the case, but the world is a different place for crazy eyes now. Suzanne taught us to respect the bulge, the “childlike stare, except children aren’t scary.” It was a tough competition, with at least two serious contenders, but the victor has been announced. Suzanne, we throw our pies for you.