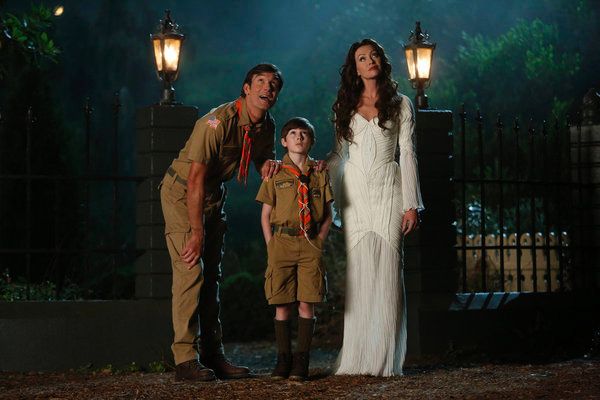 Bad ideas in Hollywood tend to escalate more quickly than an anchorman brawl. One minute you’re sipping tepid bottled water and talking story lines in a casual network pitch meeting, and the next thing you know, Brick’s killed a guy. Or, if you’re Bryan Fuller, even worse: How else to explain how the twee maximalist responsible for lovely failures like Pushing Daisies and Wonderfalls suddenly found himself tasked with remaking The Munsters, a nearly 50-year-old sitcom that’s become more of a punchline in its afterlife than it ever had in its scripts? I suppose it’s possible to credit the horror boomlet caused by the Twilight phenomenon or the easy intoxication of corporate encouragement. But more likely it came down to the same reason as anything senseless in Hollywood: dollars. After all, if money talks, its voice must get exponentially louder as it climbs into the millions, a resigned, cynical voice whispering “What the hell!”

Right, so: Mockingbird Lane, the rotten fruit of Fuller’s misbegotten labor that makes its debut (and, most likely, finale) tonight at 8 p.m. EST, is notable not for its badness &#8212 and it’s plenty bad! &#8212 but more for its novelty. Most failed TV concepts tend to be tossed into studio content incinerators and never heard from again. Even NBC, a network that only a few months ago ordered multiple episodes of Are You There, Chelsea?, tends to keep its biggest failures permanently out of sight, as they did a year ago with David E. Kelley’s yikesy Wonder Woman and last week with Dane Cook’s Next Caller. But Mockingbird Lane — originally commissioned for this fall, then benched for “retooling” — is the rare busted pilot that will get a public airing. Should audiences take to its unpalatable strain of lion-eating whimsy, there’s a chance it could find a more permanent spot on NBC’s air. But I wouldn’t bet Grandpa Munster’s eternal life on it.

The original Munsters was a dopey, black-and-white family sitcom with an added novelty: Dad was Frankenstein’s monster, Mom was a witch, and Junior was just really super creepy. It wasn’t so much a rip-off of the superior and satirical The Addams Family — oddly, the two premiered a week apart in 1964 — as an unnecessarily banal defanging of it. Even though the Munsters’ appearance was otherworldly, their sitcommy foibles were decidedly not. (From Wikipedia’s description of Episode 6, “Low-Cal Munster”: “Herman wants to attend a reunion of his army buddies, but can’t fit into his uniform. Lily doesn’t want him to go, so they make a deal that if Herman can lose enough weight to fit into the uniform, she’ll let him go.” — guest-starring Paul Lynde as Dr. Dudley!) With Mockingbird Lane, Fuller bravely goes bobbing for apples of meaning in a decidedly shallow bucket. His Munsters are Addams-y outcasts, hated and feared for what turn out to be very good reasons. Herman (a colossally miscast Jerry O’Connell) is a steampunk zombie, stitched and zippered together out of stray parts. His wife Lily (a luminous but restrained Portia de Rossi) is … made of bugs? (It’s not that clear.) And Grandpa (Eddie Izzard, actively trying to deport himself with every line-reading) is a sly, sanguine bloodsucker, more interested in drinking the neighbors than befriending them.

But the real action is focused on young Eddie, winningly played by 12-year-old Mason Cook. The ‘60s-era widow’s peak is long gone, replaced instead by a very ‘90s sort of identity crisis. Eddie wants nothing more than to continue life as a Wes Anderson outtake, earning merit badges with his scout troop and speaking like a world-weary adult. But nature (and the network) has other plans: In the pilot, Eddie struggles with the changes in his body and accepting life as a lycanthrope. Or, as Grandpa purrs when he’s still wrist-deep in gore, attending to Herman’s — wait for it — broken heart: “You’re too attached to how things were. Only were is now werewolf.” Obviously, Eddie isn’t the only howler here.

Fuller tries his best to make sense out of this hash — and when that fails, he definitely tries his most. The hour is awash in ghoulish detail (the Munster manse, formerly the home of a serial hobo murderer, is particularly ooky) and hammy excess. (Cheyenne Jackson, as a doomed and, apparently, delicious scout leader gives it his Broadway all.) But as befits a project with no discernible reason for existence, the tone remains intangible as a ghost. Despite his candy-cane-colored visual palette, Fuller’s appetites tend to run toward a darker shade of red: Grandpa actively encourages killing others in order to keep his family if not alive then certainly undead (“the circle of life is a violent shape”). But Mockingbird can’t figure out if this should be humorous or horrifying; it’s got the thirst to be scary but lacks the guts to go through with it.

Instead, it’s possible to feel the network’s neutering notes piling up higher than Izzard’s arched eyebrows. The littlest Munster grows hair in surprising places (i.e., everywhere) and terrorizes his fellow Cub Scouts without managing to lay a claw on any of them. Lily talks of a postpartum desire to devour her own child, but now only offers him gummy platitudes. Mockingbird Lane had a reported $10 million budget — an outrageous figure that almost guaranteed it this onetime charity airing — but not even that kind of cash can paper over all the problems. Eight figures can’t buy you a coherent plot. But it can buy you a lavish tracking shot of a naked Eddie Izzard being formed out of a teeming mountain of CGI rats.

All told, Mockingbird Lane isn’t a failure of execution — actually, there’s a relatively successful one depicted in the pilot — but of hubris. In creative arenas like writers’ rooms and improv troupes, it’s often said there are no bad ideas. But in executive suites it’s another story. Just because you can reboot something doesn’t mean you necessarily should. Not every piece of lowbrow nostalgia deserves a high-minded reconsideration, not every Frankenstein ought to be jolted back to life. Fuller will be fine; in early 2013 his heavily hyped take on Hannibal will air on NBC, a no doubt sturdier canvas for his particular brand of fevered eccentricity. And, in a break from recent years, NBC is suddenly in a position to shrug off its failures: On the broad back of Cee Lo Green and the surprise success of Revolution, the network has won the coveted 18-49 demographic every week of the fall season. The future of the Peacock’s dramatic business, president Bob Greenblatt was quoted as saying in a recent New York Times story, is “big new idea[s].” Laudably big but laughably old, Mockingbird Lane at least comes with its own coffin.