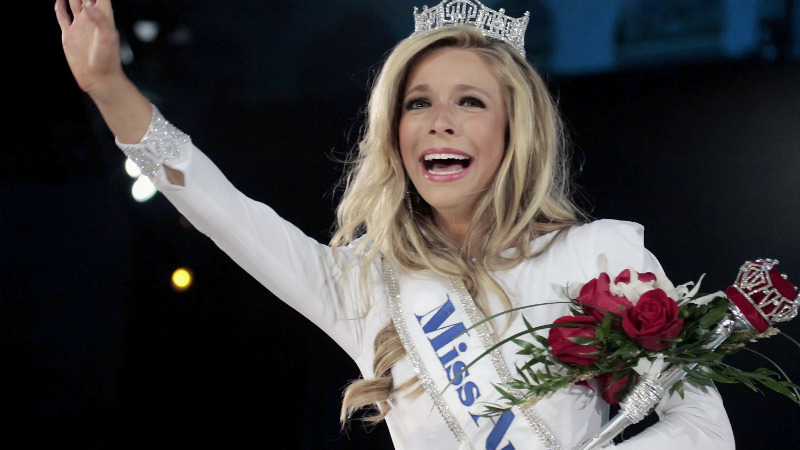 Last night, the 2014 Miss America Pageant, like most things in life, was ruined for me by the West Coast delay. I had not really intended to watch the show, despite the reassuring presence of host Chris Harrison, for all the reasons you would expect: It’s an archaic vestige of a not-quite-bygone era of farcical misogyny, it’s insulting and reductive toward the full scope and potential of the lives and experiences of women, blah blah blah. But then I heard on Twitter that they were asking questions about ISIS and Ray Rice, and I promptly set my DVR, because above all things, I am an entertainment connoisseur.

I actually fell asleep somewhere in between the swimsuit competition and evening wear, but caught up this morning. I don’t remember the last time I watched a Miss America telecast, but it’s always useful to be freshly shocked by completely extant, thriving backwardness. I realized the perhaps blindingly obvious fact that the stages of the competition are sequenced in order of descending importance — it is crucial that we are safe in the knowledge that the finalists all look great in a swimsuit (i.e. “show a commitment to health, fitness, and talent”) before we watch their ventriloquism routine. There are probably a few very talented, well-spoken women who get eliminated in those runway rounds, but imagine the horror if we let an Ivy Leaguer with the voice of an angel through, only to discover later that she had a little cellulite?

Anyway, I was watching all of this for the interview portion, which came last, because when you think about it, being able to express yourself verbally is really just a cool bonus on top of being able to do the splits (and singing is just a bonus to having a hot bod). When I got to that part and realized there were only 20 minutes left of the show, I thought, This can’t be right. We have so much to talk about with these accomplished ladies! How can we possibly judge their value as people in 20 minutes? We need at least an hour!

But it turns out we only needed 20 seconds. In the final round, the five remaining contestants each reached into a magical golden seashell and drew the name of one of the judges, who then asked them a question (all of which, according to Harrison, had been deemed by both the Miss America powers that be and ABC to be equally difficult). In addition to Rice and ISIS, the topics included gun control, campus rape, and female representation in the Senate. All I saw in those initial tweets from the East Coast were the topics, accompanied by some disbelief that the Miss America Foundation thought it would be productive to have beauty pageant contestants take on issues that not even the world’s most influential bloggers seem to be able to figure out. But in actually watching, and hearing their answers, I had a different reaction. Maybe we all still expect every pageant contestant to be Miss Teen South Carolina, but nobody really failed that hard. Here’s Miss New York Kira Kazantsev (now your Miss America) on what issue she believes should be a priority for women in Congress:

I really believe that sexual assault in our military is an issue that these women have gone to fight for. And every single woman who fights in our military deserves the right to be safe, and to be happy, and to be respected by those she serves with. Those women should go to fight, and they are, and I’m so proud to be one of their constituents.

Not bad, and not a second over time! However, and I mean no disrespect to Miss Kazantsev, who seems as just a winner as we could ask for in this bikini-and-pony show, they’re just words, out of the mouth of someone who’s been spending probably a not-small amount of this past year practicing her “Cups” routine. She acquitted herself impressively given the constraints, and it got her some applause, and perhaps some new fans. But her mini-speech is already lost in the ether.

And that’s when it dawned on me: Miss America is Twitter.

The questions were undeniably skewed toward issues people yell at each other about in comment sections, and definitely chosen for their schadenfreude potential. (Between that and the intentionally hilarious non sequitur pop-up facts during the talent portion — “Attacked by a cheetah in Zambia” — I wondered if Harrison had also been hired as a producing consultant.) We wanted to see one of these women put her foot in her mouth, and we knew there was a good chance of it, because it is almost impossible to talk about a divisive issue with a limited time/character limit and do it well. And even if you succeed, the chance it makes any lasting impact is small.

When it comes to Important Shit, almost nobody can say everything in 140 characters or 20 seconds. In both pageants and social media, it’s absurd that we are ever asked/feel pressure to express ourselves that way, and that our worth would be assessed on that short a missive, but it’s also kind of our fault for buying into the race in the first place. Not everyone should be asked for their thoughts on how we deal with ISIS. (And some people totally should be!) We’re all just making our way through our feeds in bikinis and sashes: exposed, princess-waving, trying to justify our word count. Sometimes our talents are appreciated, sometimes they aren’t. And more often than not, we’re just grateful when someone isn’t a complete racist.