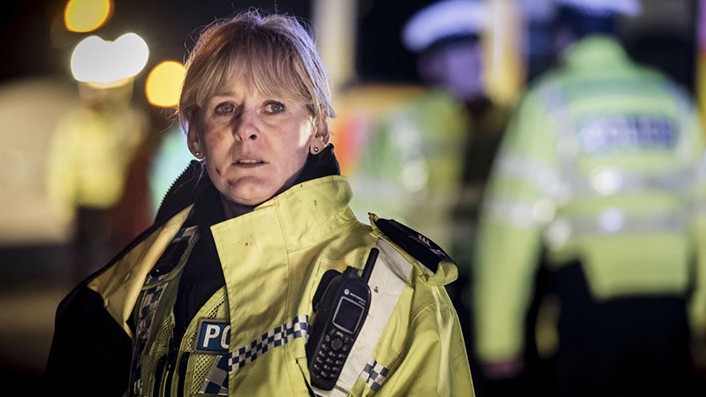 Later this week, I’ll have a roundup of the new network dramas for the fall 2014 season. Spoiler alert: It’s not pretty. Even looking beyond the boilerplate setups — if you’re not adapted from a DC comic, ripped off from Homeland, or a weirdly jaunty cop show, you’re not on the air — what’s most depressing about these supposedly fresh new hours is their stale settings. CBS is debuting four new dramas: Two are set in Los Angeles, one in Washington, D.C., and another in a Zatarain’s commercial. NBC has shows set in cities ranging from New York to Washington, while ABC sees that New York and, as a wild card, raises a Philadelphia. What a thrill it is to bask in an imagination that stretches nearly as far as Amtrak’s Acela service! I’m willing to accept that there are only a limited number of television stories to be told. But do they have to be told in the same places?

It’s a thought that seems especially relevant, not to mention damning, when considering Happy Valley. The six-episode BBC series was a sensation when it was broadcast earlier in the year in the U.K. and is now available, in its entirety, to stream on Netflix. After watching the first episode, I was ready to leave it there. The plot, about a bungled kidnapping, felt overly familiar: It was Fargo, the movie, all over again and I wasn’t in the mood for submitting myself to those same, grinding gears of karmic cruelty and fate. But after pushing through the next two hours, I’m glad I didn’t check out. Happy Valley is an impressive reminder of the myriad ways good writing, better acting, and, above all, a unique sense of place can make even the shaggiest story feel surprising and vital.

Happy Valley is set in a smallish town in the picturesque valleys of Yorkshire, the sprawling county in Northern England where people say “nowt” when they mean to say “nothing.” I wouldn’t call the community tightly knit — people are more thrown atop one another — but it’s the sort of place where the coincidences needed to fuel a crime story aren’t far-fetched. They’re simply a way of life. The inciting incident that disrupts that life is the resentment festering within one Kevin Weatherill (Steve Pemberton), a harried accountant at local refrigeration giant Nevison Gallagher. Kevin, like many doughy, fictional patsies before him, feels slighted and underpaid by his millionaire boss (the aforementioned Gallagher) and hatches the sort of plan that is deemed foolproof only by actual fools. Kevin encourages some local toughs to kidnap Gallagher’s daughter, Ann, and split the ransom money with him. Of course, they actually go ahead with it and then, gradually, all hell breaks loose.

Our protagonist for this downward spiral is Catherine Cawood (Sarah Lancashire), a tough-but-kind police sergeant still mourning the suicide of her daughter, nine years previous. Her daughter had been raped and impregnated by Tommy Lee Royce, a local thug; after giving birth to a son, Ryan, she hanged herself in the family’s home. Catherine is now raising Ryan with the help of her sister, Clare, a recovering addict played by the exceptional Siobhan Finneran (the cruel Miss O’Brien on Downton Abbey) and little to no involvement from her ex-husband, Richard, who can’t bear to look at the boy — but still thinks nothing of calling up his ex-wife for a quickie. What’s remarkable about the role and Lancashire’s revelatory performance in it is how deeply physical Catherine is. Unlike the high-heeled stick figures who pass for cops on American dramas, Sergeant Cawood huffs and puffs while chasing down a drug-peddling ice cream truck, she bruises and bleeds when kicked in the face by a perp, and she weeps, loudly and unapologetically, when the tragedies begin to fall around her like rain.

Though Catherine doesn’t realize it for some time, a newly paroled Royce is one of Ann Gallagher’s kidnappers. And so her dogged determination to do her job begins to look more and more like an unslaked thirst for vengeance. It’s a credit to creator Sally Wainwright that Happy Valley never once tips over into mawkishness or sentiment. In fact, it’s bracingly, almost shockingly calloused about such things. Unlike Fargo’s Marge Gunderson, an obvious touchstone for the part, Catherine isn’t astonished or bemused by the evils that men do. She’s grimly familiar with them. In fact, she and Clare — kindhearted people, with their comfy cardigans and ever-present mugs of tea — have learned the hard way to expect them. Though Happy Valley’s plot follows a well-tread path toward chaos and doom, Catherine makes for unique and rewarding company along the way. She’s the all-too-rare female lead who is allowed to make giant mistakes — and then given the chance to use her own impressive competence to correct them.

The dearth of strong, complicated female roles like this, even now, on domestic TV is criminal. (And please don’t point me to paint-by-numbers pablum like Katherine Heigl sassing the president on the upcoming State of Affairs.) But what Happy Valley highlights even more is the puniness of domestic TV’s canvas. It’s shows like this that make me wish American networks would take a moment to remember the size of the country they’re tasked with entertaining. So-called flyover states and forgotten towns don’t just represent opportunities to pander — they’re overflowing with creative possibilities as well. (Have we really forgotten Friday Night Lights so soon?) There are Happy Valleys all over these United States, each packed with small slights and petty crimes that feel more than big enough to those living through them — and, in the right hands, would feel that way to a smart, engaged audience as well. An industry friend told me that the buzzword du jour among development execs this year is “noisy,” which is both appalling and depressing. As Happy Valley proves, explosions don’t have to be literal to make a deep and lasting impact.