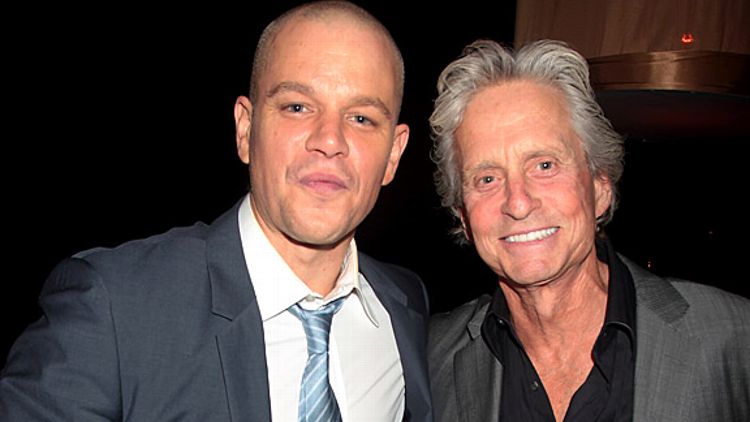 Steven Soderbergh’s Liberace movie has been in the works for years, and now it’s got both a home and big-name lead actors. HBO has picked up Behind the Candelabra and set Michael Douglas to star as Liberace, with Matt Damon playing his live-in lover Scott Thorson; the movie will revolve around their relationship. This is great news and everything, but now we’re going to have to come up with a new title for our candelabra documentary. Grade: A [HR]

Don Johnson has joined Django Unchained as plantation owner Spencer Bennett, with Christoph Waltz’s bounty hunter and Jamie Foxx’s freed slave. Mr. Johnson is of course just the latest actor in Quentin Tarantino’s long, proud tradition of boosting the latter-day careers of beloved names from years past. The way it works is, first Johnson’s performance is met with cheers of adulation, and then we all have to start rewatching Nash Bridges. Grade: B+ [Deadline]

Courteney Cox and David Arquette have sold NBC the sitcom Ten Years, about a long-term couple that recently broke up. Wait a minute — isn’t that what just happened to Cox and Arquette in real life? Was their whole separation just fodder for television, like some kind of crazed performance art? Are these two the James Franco of the Scream franchise?! Grade: C+ [HR]

Johnny Depp never says die: after having The Lone Ranger canceled due to its cumbersome budget, Depp’s movie – in which he’ll play Tonto – has been revived. The script has been tweaked and the budget brought down to a still-crazy sounding $215 million; Armie Hammer is still on board as the title character, and Gore Verbinski is still on board as the director. Look, guys, we’re happy your project is back on, but, seriously, this is maybe not the best idea. Grade: C [Deadline]

Michael Fassbender will join director Steve McQueen for the third time on 12 Years a Slave, the true story of Solomon Northrup, who was kidnapped in Washington in 1841 and rescued from a cotton plantation in Louisiana in 1853. It’s not clear yet who Fassbender will play, but probably someone handsome. Grade: A [Showblitz]

Hairspray’s Craig Zadan and Neil Meron are producing a remake of the hit 1989 weepie Steel Magnolias for Lifetime – but with an all African-American cast! No casting decisions have yet been announced. That means we don’t yet know who will deliver that now famous line, “Oh my god! All of these magnolias are made out of … steel!” Grade: B+ [HR]

Jim Carrey is in talks for Burt Wonderstone. The movie stars Steve Carell as Burt, a Vegas magician who splits with his longtime stage partner, only to have his thunder stolen by a young hip street magician. It’s not clear what role Carrey would play so let’s say, uh, taxidermy consultant? Grade: C+ [Deadline]