Matthew Perry’s Go On: NBC Sends a Broader Canary Down Its New Comedy Coal Mine 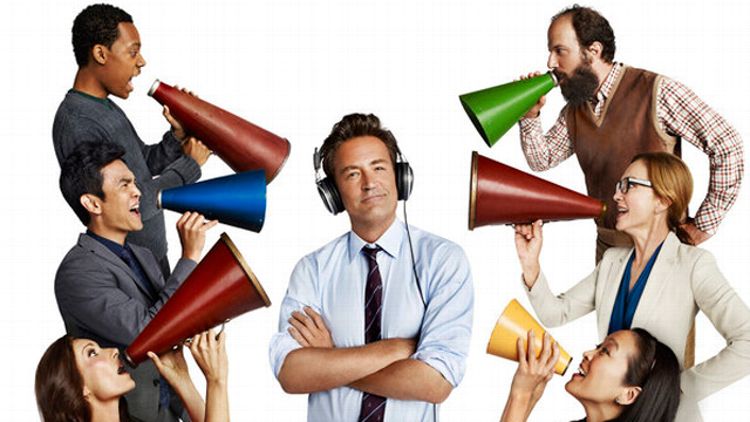 Of all the critical invective and fan anger hurled at the bumbling peacocks of NBC over the past few seasons, there is at least one small portion that remains undeserved. The notion that the network isn’t invested in the success of Community — its low-rated, highly tweeted meta-sitcom — is a lie bigger than the one Dean Pelton tells himself every morning when he gazes into his Broadway makeup mirror. On paper, Community ticks every box on NBC’s checklist for comedy success (one scribbled on “From the Desk of Brandon Tartikoff” stationery and kept safely behind glass deep inside Willard Scott’s recharging station in the bowels of 30 Rock): a mismatched group of outsiders brought together by outrageous circumstance, admirably casual diversity, zippy zingers tempered by honest emotion, and high potential for hookups and/or animal guest stars. The problem was that Community creator Dan Harmon stubbornly insisted on delivering a show that commented on the canned nature of this setup; instead of celebrating it, he subverted it. Through three increasingly odd seasons, the standoff continued. NBC wanted pathos; Harmon gave them paintball. Guess which side eventually got splattered?

This fall, NBC will debut not one, but two, attempts to get the Community formula right. The first is Community itself, denuded of its stubborn creator, but hopefully not of all its occasionally enraging charm. (For what it’s worth, Harmon seems to be taking his ouster — and the stumbling Friday-night death march of his zombie show — with typical forthrightness. “I would have fired me too,” he declares in this recent interview with KCRW.) The second is Go On, a tidy new half-hour that gets a special preview tonight during the Olympics. Starring a still-snarky Matthew Perry as a widowed radio jockey forced to attend group therapy, the show has been trumpeted by NBC president Bob Greenblatt as a model for a new, “more broad” comedy slate, and it’s certainly that: Perry’s Ryan King fires off hollow-pointed groaners about Bradley Cooper and Megan Fox (“Could I be any more topical? — Chandler Bing, 1996) while still finding time to wallow in Iron & Wine (!) -soundtracked montages about human sadness. From a purely corporate perspective, this is a clear win: The flirty banter between Perry and the excellent Laura Benanti, as the barely qualified group leader, may be creaky (sample: “And … you’re in my car.” “I’m in your car!”), but it’s considerably more familiar to mainstream audiences than an extended half-hour jag on, say, My Dinner With Andre. And it’s an undeniably smart play for NBC, bereft as it is of established hits that don’t involve spinning chairs, to launch their new gold-standard sitcom in the midst of all the shiny medals. (Serious question: Who has a more impossible burden to shoulder in the weeks ahead, those competing in the clean and jerk in London, or the programmers in Burbank? And who will make crazier faces?) But, creatively, the pilot finishes far from the podium.

Go On is the brainchild of veteran writer Scott Silveri, whose IMDb page reads like a CliffsNotes version of NBC’s rise and fall: After stints on Mad About You and Friends, Silveri co-created the disastrous Joey and, more recently, the perfectly forgettable Perfect Couples. And he brings a cool professionalism to the proceedings that’s at times quite engaging: In 25 short minutes, Silveri manages to introduce Perry’s King, integrate his silver-tongued-but-actually-softhearted presence into the sad-sack “Transitions” group, spark the inevitable romance with Benanti, and hurl an entire fruit basket at Terrell Owens. The casting is also slick, with the always-aces Julie White as a rage-stricken lesbian lawyer, and oddball comedian Brett Gelman as the resident oddball. (This may be the easiest paycheck of all time for Gelman, whose character thus far is comprised entirely of weird sweaters and glares that veer between menacing and sexual.) Kindly old Bill Cobbs is escorted in to be both kindly and old, while John Cho bides his time between Star Trek sequels by hamming it up as Ryan’s inappropriately butt-slapping boss. Perry, of course, could do this sort of salty/sweet routine in his sleep, and occasionally appears to be doing so. But his scenes with the younger cast members — particularly Allison Miller as Ryan’s snippy assistant (tasked with filling her boss’s iPod with the sound of his own voice) and Tyler James Williams as the saddest member of a particularly sorry crew — crackle with an energy that’s not quite Must See TV, but at least qualifies as Might As Well See TV.

Comedy pilots are notoriously hard; nearly every good sitcom on the air has evolved considerably from its humble beginnings, Community chief among them. But aside from an inspired set piece — “March Sadness,” in which rascally Ryan unites the fractured group via a bracketology of competitive misery — Go On is, at its network-mandated heart, almost exhaustingly retro. It’s a sneak peek into NBC’s corporate Dreamatorium, a place where Seinfeld never went off the air, DVRs haven’t been invented, and jokes about dudes who cosplay in chain mail are clever, not cliché. Clearly buying in to his network’s new/old strategy, Silveri aims so hard to please that he ends up missing the target entirely. NBC’s new comedy directive may not represent the darkest timeline — too few goatees for that. But so far it’s definitely the most dispiriting one.