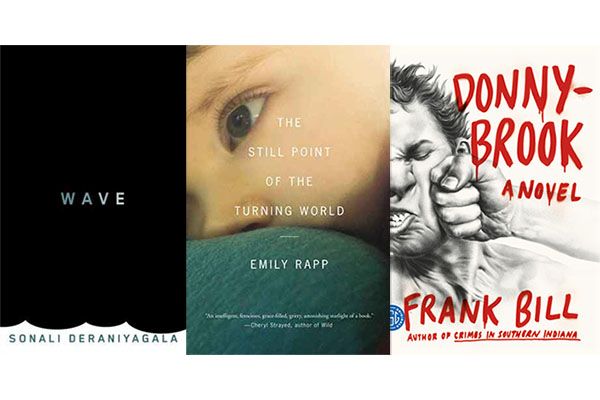 Wave opens immediately as the tsunami hits on Boxing Day in 2004. Sonali Deraniyagala is with her family, vacationing in Yala, a park on the southeastern coast of Sri Lanka. From their hotel room, Deraniyagala can see the wave approaching, and, from a distant, it seems like nothing. “It didn’t seem that remarkable. Or alarming,” she writes. “It was only the white curl of a big wave.”

Moments later, after a failed escape in the back of a jeep, Deraniyagala loses everything — her parents, her husband, her two sons — in the sudden and brutal force of the tsunami. It is with the same unforgiving ferocity that Wave becomes a brave and shattering memoir of survival.

I think “visceral” is a lazy word in writing, but I can’t come up with a better way to describe Wave as a whole. Deraniyagala reflects on loss with equal parts lyrical beauty and stream-of-consciousness mania. Wave moves in swift, jagged motions as Deraniyagala dizzyingly spirals into a depression. She writes, “Each night I hoped to die from my frenzied drinking. And it diluted my terror of getting to sleep. I knew I had to wake up the next morning and relearn the truth all over again.”

The resolution is surprising, leaving readers on an optimistic note. But make no mistake: This book will leave you devastated. It will.

TL;DR: The Impossible, but not just about white people.

The Still Point of the Turning World, by Emily Rapp

Once you finish Wave and want to read another heart-wrenching family memoir, I would recommend The Still Point of the Turning World, Emily Rapp’s account of having a son with a rare and fatal illness. (But seriously, do not read this back-to-back with Wave, as I made the mistake of doing.)

Rapp’s first and only son, Ronan, is diagnosed with Tay-Sachs disease, which, in addition to being terminal, is also degenerative. Whereas Wave’s strength comes from its frantic momentum, The Still Point is a slow burn. But this also allows for moments of levity throughout the book. There are joys to be found in Rapp’s elegant prose and the surprisingly effectively literary allusions she makes (no surprise that a writer turns to literature for comfort).

Rapp returns to a few key ideas, but the most powerful one is her meditation on the long, healthy life Ronan wasn’t robbed of, but never given.

“In the days following his diagnosis … I was afraid to be alone with Ronan, terrified of the sadness and helplessness, the anger and fear that touching his head or his hands or his face provoked in me, these jagged feelings that punctured my day and made it difficult to do activities as simple as boiling water for tea, or pulling a few squares of toilet paper off the roll, thinking Ronan will never be able to do anything as basic as this.“

It starts to feel a bit repetitive, but I think this is deliberate. Parents are often obsessed with what it means to be a “good” parent; it’s why they can be overprotective — to keep their children safe, to make sure they have a good life. In Still Point, Rapp is on a journey to understand what it even means to be a parent when her son has no future at all.

About a year ago, I wrote about Wiley Cash’s A Land More Kind Than Home, calling it “the strongest case that Southern Gothic lit isn’t just about spilt blood and guts, but fully realized settings and characters deeply felt.” Donnybrook is the polar opposite of that book, but I’d wholeheartedly recommend it for anyone who likes their Southern Gothic to be less meditative and more … violent.

Donnybrook is filthy and vicious, with little moral center to really hold it in place. At first I found these qualities to be jarring, but as the book trudges forward, murder after murder, you start to realize that this is the lawless, godless universe that Frank Bill has established. Donnybrook feels not too different from a Guy Ritchie movie. The book follows a handful of different criminals, each with his/her own twisted motives, as they converge (deliberately or not) at a three-day bare-knuckle boxing tournament run by a sadistic millionaire in some remote part of southern Indiana.

I had some hang-ups with the book (there’s a problematic female character and an Orientalized thug), but they didn’t stop me from finishing it in two sittings. Even among the chaos of Donnybrook, there is a sense of justice that seems to control the destinies of its characters. The characters who are not motivated by self-interest have a higher survival rate, while the more despicable characters meet satisfyingly cruel fates. And not surprisingly, it’s the latter group of colorful scumbags that makes Donnybrook such a guilty, bloody romp.

TL;DR: A wretched hive of scum and villainy.

The Fun Parts: Stories, by Sam Lipsyte
The Magic Circle, by Jenny Davidson
This Close: Stories, by Jessica Francis Kane

The Book of My Lives, by Aleksander Hemon

Kevin Nguyen (@knguyen) is a founding editor at The Bygone Bureau

Freak Show & Tell: Just So Long As Those Tire Bits You're Snacking On Are Nice and Clean