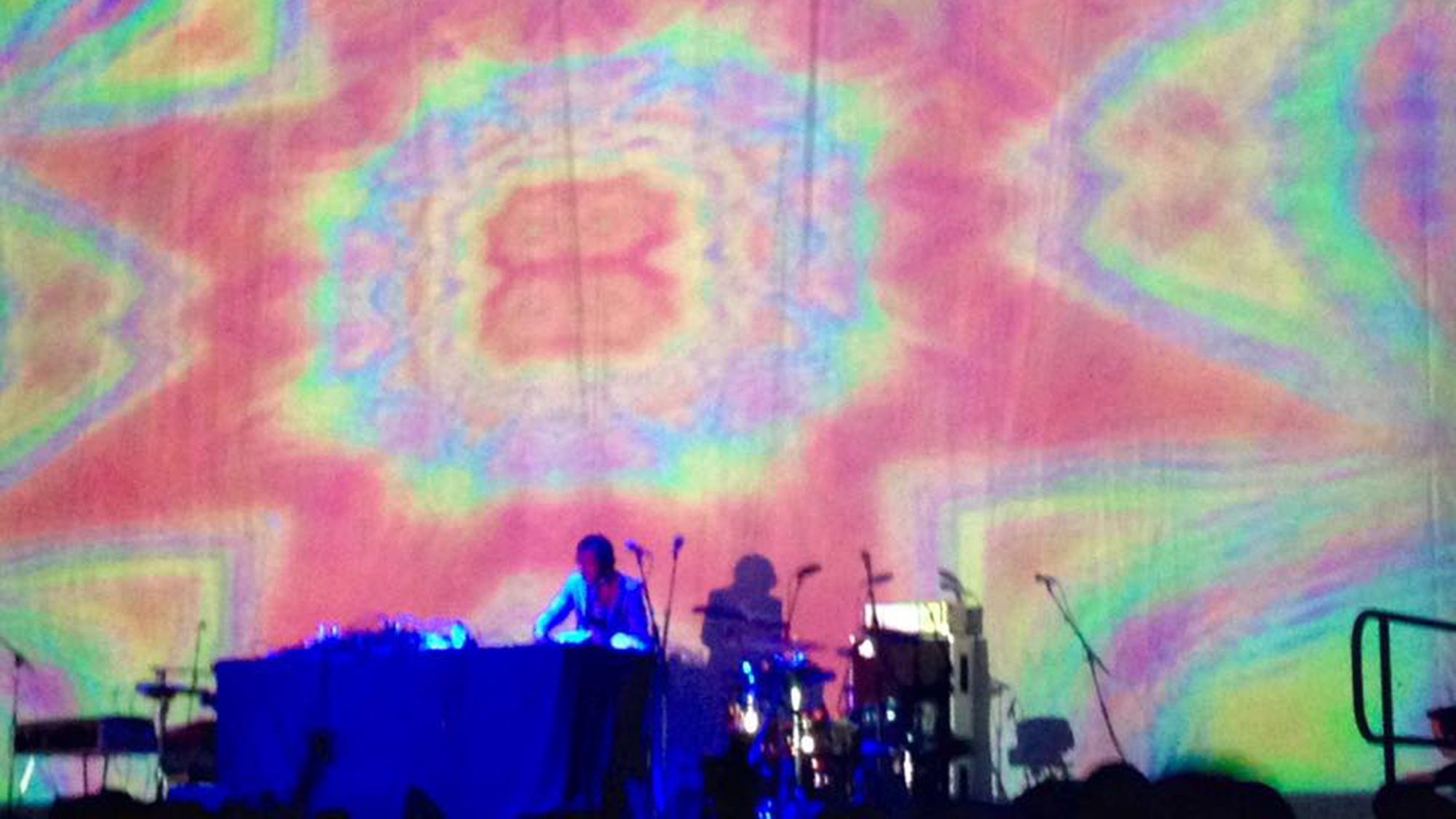 “Looking out at you all, this feels like that party scene in the [second] Matrix,” said MC Nocando, biding time between DJ sets at Saturday evening’s second-annual Low End Theory Festival in South Los Angeles. The massive main room of the Shrine Auditorium was nearly filled to capacity: 5,000 streamlined millennials with Macklemore undercuts and man buns, wearing intergalactic sweats and tie-dyed T’s, sweating, grinding, and staring, trance-like, at the stage. It appeared a bit bacchanalian, yes, but also dystopic. Think the 1984 Apple ad.

It was 11 p.m., and 37-year-old Los Angeles DJ Daedelus (Alfred Darlington), had just finished a 40-minute set. At the turntables, wearing suspenders and a Karl Lagerfeld bow tie, his curly brown hair down to his chin, and a towering screen projecting cotton-candy-colored geometric and animetic figures at his back, he looked Wonkian. His style was unique — even among the eclectic performers — and yet he was completely of the scene.

Born out of a weekly party at the Airliner bar in the Lincoln Heights neighborhood, and first held in the early 2000s, Low End, according to Daedelus, is “not hip-hop, and it’s not electronic music; it’s something else that’s like verging.” To get a better idea, look at the festival headliners: Thundercat, Earl Sweatshirt, and Flying Lotus. Each is a successful artist in his own right, and yet each is arguably best known for his respective collaborations — Thundercat and FlyLo with Kendrick Lamar, and Earl as a member of Odd Future. In 2015, Thundercat and FlyLo especially are most significant as sonic influencers, generators of new age jazz and electronic music to be fused with contemporary hip-hop.

But interestingly, there were few collaborations at the small festival. Hannibal Buress made a surprise performance, rapping on the small outdoor stage early in the evening with Open Mike Eagle. For the most part, each artist was there to perform his own act. Not even Thundercat and FlyLo — close friends and collaborators — performed together. Each put on a distinctive, auteurist show: Thundercat jammed, Earl grieved, and FlyLo amazed.

It would’ve been nice to see some of these artists take the stage together, but ultimately they didn’t need to; they had their MacBooks. And though the transitions could be a bit disjointed — most noticeably, Earl brought a figurative dark cloud with him onstage — there were thematic through lines connecting each act to the last. Each respective artist’s music journeyed through darkness. The haunted feeling was only heightened by the Shrine’s regal halls — with blood-red carpeting and curtains, grand chandeliers, and stained-glass windows, the venue felt like an L.A. reimagining of the Black Lodge.

Death — both literal and as an existential concept — was a major theme on the most recent albums of all three headliners. Thundercat’s The Beyond/Where the Giants Roam (2015) is a funky, six-song journey through darkness and light; Earl mourns his grandmother, and allows a friend to mourn a friend, on I Don’t Like Shit, I Don’t Go Outside (2015); and FlyLo’s 2014 release is literally called You’re Dead!

There were certainly light moments at the festival, but the heaviness was definitely not imagined. “[At] Low End you have to kill people. I imagine everyone is a baby seal and I am trying to club them with my seal thing,” Daedelus said. “It’s strange but it really is different — like I can do things I could never do anywhere else here. You’re not looking for an impactful rhythmic set. You’re looking for moments that are either the most emotional thing you can squeeze out or like the most boom and bass, because you know the sound system can take it.”

The most affecting set of the evening was Earl’s, which began at 12:35 in the morning and didn’t seem meticulously strategized the way many performers’ acts did. After opening emphatically with “Pre,” the swaggering intro to Doris, Earl took a moment of silence for Sean Price, who had died that morning. The screen on the stage, which had been colorfully animated throughout the day, primarily projected in dark grayscale during his performance. His words were pained, and that pain continued to show itself throughout his performance.

The crowd helped Earl rap RZA’s lines from “Molasses.” When he transitioned to “Huey,” the opening seconds felt like entering a macabre carnival. And of course he played “Grief.”

The evening could’ve ended with Earl’s performance, a big exclamation point testifying to the power of human pathos. But after Earl concluded with two unreleased tracks, the stage was swiftly and unceremoniously disassembled and reassembled. The screen that every other performer had used as a backdrop was replaced with a phantasmagoric cocoon, behind which Flying Lotus, wearing a white shirt, black pants, and his trademark gas mask, would perform. The crowd chanted his name, and when he made his way to his laptop, “You’re Dead” was projected onto his multidimensional shield. The projection would change, as it did with the other acts; but for FlyLo, this was the show. The designs were incredible, shifting from the cosmic to the psychedelic; in a surrealist animation during “Ready Err Not,” FlyLo is decapitated, and things get weirder than Un Chien Andalou.

Eventually, FlyLo came out from his cover, removed his gas mask, and rapped a few verses. He was a human, not a wizard or a robot. The night ended with “Never Catch Me.” As the recording played out, with Kendrick Lamar’s voice repeating, “Say you will never ever catch me, no, no, no,” FlyLo reached out to the front of the crowd. His fans would be there if he fell, and their iPhone recordings would ensure that he’d never disappear. The lights shone on his face and Kendrick’s voice disappeared in the dark. “This is the one place everyone knows who I am,” FlyLo said prior to the show. “I don’t think it’s dark.”

This post has been updated to reflect that Hannibal Buress performed with Open Mike Eagle, not Open Mic.