Leo and Tobey: The Greatest Bromance Hollywood Ever Told 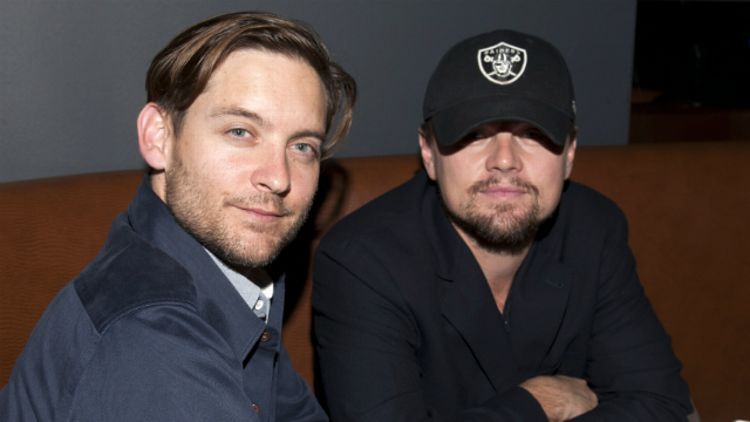 It sounds like the plot of a science fiction movie: Two boys are selected to enter into the same profession as youths, climb their way up the ranks as friends, and compete against each other for the best jobs as men. They make a series of choices, some dictated by fate and others by chance, that ultimately make them very different from each other as adults. They remain best friends throughout it all, each one sometimes secretly wondering what his life would have been like if he had been born the other. That dystopian future scenario is more or less the story of Leonardo DiCaprio (born in Hollywood, 1974) and Tobey Maguire (Santa Monica, 1975), the longterm BFFs who are starring in Baz Luhrmann’s The Great Gatsby as the iconic pair of toxic BFFs.

Maguire and DiCaprio met hustling the L.A. audition circuit for the same child actor parts. Both had been working sporadically in TV and film. Maguire had done guest shots on the ’80s Twilight Zone reboot, Blossom, and Roseanne. DiCaprio logged two episodes on The New Lassie, playing the role of “Glen,” which was also played by Robin Thicke. Leo also did an episode of Roseanne and played “Young Mason Capwell” on the soap opera Santa Barbara. Both kids came from divorced parents and had bounced around lots of shitty apartment complexes. As child actors, they found a way to generate their own income at an age where most professions wouldn’t legally be allowed to hire them. DiCaprio and Maguire both auditioned for the 1990 TV version of Parenthood. The two boys became friends and made an agreement that they’d help each other land work whenever possible. From the get-go, Leo was the chosen one. DiCaprio got the part on Parenthood, but kept his word and recommended Maguire, who was thrown a guest stint. The show only lasted a season, and DiCaprio was back on the market, playing small roles in Critters 3 and Poison Ivy before doing a whole year as a cute homeless kid on Growing Pains, while Maguire nabbed a starring role on teencom Great Scott! (where he met future Pussy Posse member Kevin “E” Connolly).

Leo and Tobey went up against each other again in 1992 auditioning for the prestigious This Boy’s Life. DiCaprio won the leading role of a teenage boy named “Toby” and got Maguire hired for a bit part, playing Toby’s friend “Chuck.” DiCaprio was anointed by costar Robert De Niro with his magical Method acting skills, and in 1993 he had his biggest breakout yet as the mentally challenged Arnie in What’s Eating Gilbert Grape. After that, DiCaprio worked with Agnès Varda and impressed Sharon Stone so much she paid his salary for his role in Sam Raimi’s underrated Western flop The Quick and the Dead when the studio balked at hiring him. In 1995, Leo proved his serious actor credentials again with The Basketball Diaries, and did a nude scene to play Arthur Rimbaud in Total Eclipse. Meanwhile, Maguire was struggling and mostly on the bench, guesting on Walker, Texas Ranger, playing a bit part in failed Gen X satire S.F.W., and asking to be cut completely out of campy future cult classic Empire Records after walking off the set halfway through because his (underage) drinking problem had gotten so serious. He joined Alcoholics Anonymous and has been fully sober ever since. By 1996 Tobey was clean and playing another character named “Chuck,” this time in a TV movie starring Ann-Margret called Seduced by Madness: The Diane Borchardt Story.

Leo had an unstoppable 1996, coming off his critical indie success with The Basketball Diaries to play the ultimate object of teenage female desire for Baz Luhrmann in Romeo + Juliet. He worked with De Niro again in Marvin’s Room, adding Meryl Streep and Diane Keaton to his growing list of pedigreed costars. In 1997, Leo made Titanic and firmly established himself as the most powerful actor of his generation and the ultimate ’90s teenage cinematic sex symbol. Romeo + Juliet had already laid the foundation for full-blown Leomania; all Titanic had to do was steer into that iceberg. You can imagine Maguire’s frustration. As a loyal friend, he ought to have no reason to resent DiCaprio. But as an actor, competing against other actors his own age for the choicest roles and opportunities to work with great directors, how could he not hate DiCaprio just a little bit? Or wonder if Leo was really better than him? Or just feel slightly crazy that his dear friend is so much more loved than he is, in a Cameron-and-Ferris, Gene-and-Phineas kind of way? And crucially, how could he not suspect that some of Leo’s stream of success might owe credit to his outrageously beautiful looks? Assuming their acting talents were equal, was it just Leo’s pretty-boy looks that kept getting him hired over Tobey? Or was it even worse: Did Leo just possess superior natural gifts as an actor?

Maguire started only going out for roles that he knew DiCaprio would not be in contention for. Frozen water was a uniting theme, as Maguire finally earned his critical laurels with his lead role in The Ice Storm, Ang Lee’s masterful adaptation of Rick Moody’s novel about suburban discontent in the ’70s. Maguire fashioned himself a new niche playing lonely, creepy nice guys. He worked with Woody Allen on Deconstructing Harry a year before Leo did Celebrity (so much for avoiding overlap), made the well-liked Pleasantville, and then The Cider House Rules, with DiCaprio’s Gilbert Grape director Lasse Hallström. The Cider House Rules had a typically aggressive Miramax campaign that won Michael Caine an Oscar and made Tobey a bona fide star. Leo’s post-Titanic run was hardly smooth. He cashed in on his heartthrob status by putting a metal ski mask on for The Man in the Iron Mask, and spent too much money, time, and energy attending the world’s most overrated rave with DJ Tilda Swinton in Danny Boyle’s The Beach. Then, fulfilling De Niro’s prophecy, Leo hooked up with Martin Scorsese for Gangs of New York. He was no De Niro, and, overshadowed by Daniel Day-Lewis’s showier turn as Bill the Butcher, was unable to generate any sparks with Cameron Diaz, who proved she was much better suited to comedy.

Leo turned in perhaps his best performance to date for Steven Spielberg in Catch Me If You Can, an uncharacteristically light outing for both. DiCaprio’s charm makes us believe that he is the world’s greatest con artist, and also that at 28, he could still play 19. In the other corner, Maguire shook off the failure of his own Western, the Jewel-costarring Ang Lee joint Ride With the Devil, with a peak performance in Wonder Boys, and then cashed in his chips to become Spider-Man for Sam Raimi, where he played a high school student. Suddenly Maguire was inescapable. The Spider-Man movies made him famous, but not a true star. I have never met anyone who claimed Maguire as their favorite actor. While Maguire was webbed to his big-money franchise for years, DiCaprio aimed for an Oscar and kept getting denied. Obvious Oscar-bait The Aviator was felt to be too obvious. The Departed won several awards, but none for its amazing performances. Only Mark Wahlberg was nominated, and he lost to Alan Arkin in Little Miss Sunshine. How was Leo not also nominated! Or Matt Damon! Or Jack Nicholson! Or Alec Baldwin! Seriously!!! Leo doubled down on even more serious fare, with dull misstep Blood Diamond and bomb Body of Lies, before taking on the most serious awards-bait fare of all: classic ’50s yelling contest Revolutionary Road, directed by Oscar-panderer Sam Mendes.

Between Spider-Men, Maguire made Seabiscuit (always a LOL) and played third wheel to George Clooney and Cate Blanchett in The Good German. After he was freed from his latex prison, he played a third wheel to Natalie Portman and Jake Gyllenhaal in Jim Sheridan’s Brothers. DiCaprio’s Oscar campaign continued to no avail. If Shutter Island and Inception didn’t cover the “crying about my dead wife” credential, surely Leo’s boundary-pushing performances in J. Edgar or Django Unchained would garner him a chance at Oscar gold. No? Which brings us to 2013, with Leo and Tobey working together in The Great Gatsby. Maguire is married to Jennifer Meyer (daughter of Ron Meyer, president of Universal Studios) and is a father of two. DiCaprio is perhaps the most famous bachelor in the world. While the young Tobey Maguire anticipated the older Tobey Maguire — a questioning Jimmy Stewart Everyman type, with a creepy Vertigo-ish flavor — I don’t think anybody, including me, would have predicted that Leonardo DiCaprio would grow up to be Jack Nicholson. But I should have known: the models, the parties, the undertone of deep sadness. There’s so much offscreen action I’d like to know more about: the poker games! The Pussy Posse! What they talk about in private! Has Leo ever been in love? Was it Gisele? I bet it was Gisele. He recently told Esquire he “had better success meeting girls before Titanic,” which might be true in a sense. Are Leo and Tobey ever jealous of each other’s lives? Or has growing older mellowed them out? Do they privately worry the other will win an Oscar first? Or are they mostly just like, “This is sweet,” and then fist-bump and go back to staring at the Laker Girls from their splinter seats? Maybe they realize that more than anyone else, they still want to impress each other. After all, Gatsby is a fractured fairy tale about rather superficial friendships. Leo and Tobey are truly friends for life.