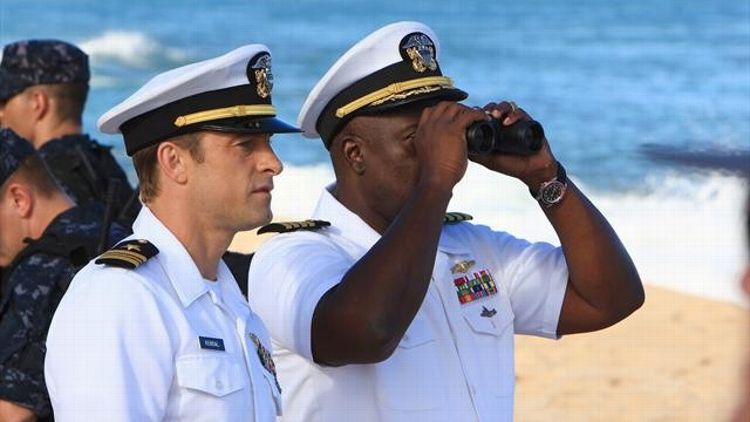 The temptation to compare television protagonists with their creators is usually one worth avoiding. After all, there’s little evidence that David Chase has ever whacked anyone or indulged in overlong dream sequences. Even Louis C.K., to the best of my knowledge, has never actually slept with Joan Rivers. Still, it’s hard to ignore the parallels between Captain Marcus Chaplin, the seething, speechifying lead of ABC’s struggling Last Resort, and his authors, veteran showrunner Shawn Ryan (The Shield, The Unit) and playwright Karl Gajdusek. [Ed.note: The usual disclosure: ABC and Grantland are both owned by Disney.] All three are confident, brash, and above all else, stubborn. Chaplin’s unwavering commitment to an impossible cause is likely to get him killed; Ryan and Gajdusek’s intransigence is merely likely to get them canceled. Either way, six episodes in, Last Resort is both a fascinating test case of the expansive, storytelling potential of television as well as a sobering reminder of the limits of the traditional network model. Like its simmering protagonist, the show has the potential to set the world on fire but, so far at least, it appears hopelessly outgunned.

Premise pilots — first episodes that establish a world rather than join one, in medias res — have become all the rage of late, and they don’t come flashier than Last Resort. The trend is the trickle-down result of Hollywood’s current blockbuster mentality, where if you can’t sum it up on the poster, it’s not getting made. Still, in a hyper-stratified media landscape, any potential advantage in the hunt for eyeballs is likely one worth taking. A truly surprising concept — science teacher cooks meth! Hero is the villain! Men care for their children! — can hijack the attention of the executives in the pitch room, the journalists in their mothers’ basements, and, ideally, the audience on their couches.

Even amid a glut of big-ticket ideas this fall, Last Resort stands out. In the gripping pilot, Captain Chaplin (Andre Braugher, gravitas cranked to 11) refuses a sketchy order to nuke Pakistan. In return, his own country attempts to sink his submarine and, in the resulting chaos, Chaplin surfaces on a remote Pacific island that is mercifully free of polar bears. Instead of surrendering, Chaplin digs in: He declares his new home to  be an international no man’s land and sends a warhead screaming past the Washington Monument to prove his point. This irradiated game of chicken has repercussions all around the world: In the contaminated ruins of Pakistan, in the back rooms of power in D.C., and on the island of Sainte Marina itself, where the crew must fight off local warlords, flirtatious French NATO employees, and each other.

The reason networks remain wary of premise pilots — even as they green-light them in increasingly large numbers — is that they provide little insight into what a show is actually going to be on a week-to-week basis. Last Resort‘s first hour pulled the pin on a plot as explosive as it was exciting. Subsequent episodes have revealed the structural challenges: How do you break a global catastrophe into bite-size fragments? With a story so big, how do you focus? As if this weren’t difficult enough, Ryan and Gajdusek also have to contend with the unyielding realities of an increasingly conservative network landscape. A critically acclaimed show like Homeland is able to attempt something similar, refracting enormous events through a hyperfocused, personal lens while, in the process, burning through tension and elevated stakes like unleaded gasoline through a vintage Caddy. But Homeland is also able to maximize pay cable’s smaller bottom line: fewer episodes per season and fewer viewers to qualify as a hit. (The lowest-rated episode of Last Resort to date — roughly 6 million viewers for last week’s druggy “Another Fine Navy Day” — had about three times the audience of the highest-rated episode of Homeland.) Bringing the show to ABC means more money for the costly underwater CGI and even costlier Hawaiian set and crew. But it also means that, in a best-case scenario, Ryan and Gajdusek must find a way to maintain the exquisite tension of the pilot for 21 additional episodes in the first season alone. That’s an awful lot of time to spend balanced on a knife blade.

This is a risky and fairly radical departure from the template established by Lost, the last heavily serialized ABC show set on a lush island to connect with a large audience. Like  the crew of the USS Colorado, the survivors of Oceanic 815 were desperate and disoriented but — and this, I think, is key — they were also as ignorant of their predicament as the fans watching along at home. Starting with both a big bang and a blank slate provided some breathing room for the show to find itself right along with its characters. Season by season, as the questions began to grow, so did the scope of the story, giving the showrunners a chance to play with both pacing and stakes. In contrast, Last Resort launched us immediately into Defcon 2: To lower the stress now would violate the show’s reason for being. To raise it would vaporize the world.

In many ways a better comparison might be The Walking Dead. Both shows do their best work on the brink and both struggle mightily in quieter moments. While it’s impossible not to get a rush of adrenaline any time Captain Chaplin swaggers onto the Con, Last Resort‘s biggest problems stem from shore leave. With Russian black ops troops parachuting down and and rival submarines lurking just offshore like fat, lethal sharks, it’s hard to gin up much sympathy — or interest — for the plight of Autumn Reeser’s bed-hopping arms lobbyist or Dichen Lachman’s quasi-mystical bartender. (The nature of the island itself is also problematic, part hippie nirvana, part polyglot banana republic. Are there 30 people there or 3,000? And who is importing all that whiskey?) Braugher, of course, is typically magnificent as the bull-headed Chaplin. Few actors possess his charisma or ability to make florid monologues about crushing “the jelly” from a rival’s eyes sound as natural as breathing. And Felicity‘s former flame Scott Speedman is winning and able as Colorado’s no. 2, a newlywed torture survivor who is nearly as anguished as he is handsome. But perhaps in a nod to network expectation, much of the call sheet is jammed with pretty faces and wobbly résumés like Aussies Daniel Lissing as a grief-wracked, shirt-averse SEAL and Daisy Betts as an authority-challenged lieutenant. Compared to the mighty Braugher and especially the leathery Robert Patrick as the ship’s ornery COB (Chief of the Boat), the rest of the lightweight cast remains floating on the surface even while the subject matter attempts to deep-dive. (Patrick really is incredible as the sexist, fruit-appreciating, French-hating foil. Twenty years after being the liquid metal face of Terminator 2, his pinched visage could now be used to upholster an easy chair.)

Through it all, Ryan and Gajdusek’s dramatic stand against network restrictions and expectations remains as entertaining as the drama itself. Yet for every flash of ballsy inspiration — two soldiers volunteering a third for execution; the skeevy Secretary of Defense (The Shield‘s Jay Karnes) taking a bullet in the leg; an hour-long military acid trip — there’s a heavy depth charge of clunky exposition (“Linus, what is my favorite deep-cover mole in the Defense Department drinking this evening?”) and soapy frippery (Jessy Schramm, as Speedman’s weepy, underdeveloped wife, would have me reenlisting as well). I worry that in their zeal to tell the biggest possible story — last week, the Chinese invasion of Taiwan was reduced to a news chyron on a muted television — Ryan and Gajdusek are unable to focus on the best story. The plight of the Colorado still feels more like a trigger than the bullet; Chaplin has all the power, but that power is predicated on him not doing anything. Despite Reeser’s high-heeled shtick, I’m actually more drawn to the clandestine high jinks in Washington, where traitors are poisoned with bad shellfish and four-star generals still meet sources in parking garages like they’ve just been watching All the President’s Men on Blu-ray. If the international crisis brought on by Chaplin’s actions really is the ticking time bomb it appears to be, I’d rather spend more time with those desperate to defuse it than dither away weeks staring at the countdown clock. (Especially while said countdown clock makes googly eyes at Gallic hotties, on-screen and, apparently, IRL.)

Still, I’m not ready to quit Last Resort just yet. Ryan’s pedigree suggests that he’ll be able to find the show he’s looking for amid all the noise. Recent weeks have shown genuine improvement (a new episode airs tonight at 8 p.m. EST) and there are fascinating, rarely televised ideas about patriotism, duty, treason, and responsibility hidden amid the semiautomatic rifles, like spinach in one of Jessica Seinfeld’s brownies. But the real concern is that by the time Last Resort finds its groove, its ship will already have sailed. (The “previously on” segments now seem longer than most commercial breaks, suggesting ABC is more afraid of the show’s inevitably weighty serialization than Patrick is of moisturizer.) Ryan and Gajdusek seem aware of how high the stakes are for them, too: Every time a show this ambitious strikes out it’s less and less likely that a major broadcast network will be willing to take a similarly big swing again. Unlike the newly childless, recently widowed Chaplin, the two showrunners actually have a lot to lose. So it’s worth rooting for Last Resort, despite its potentially fatal flaws. As their fiery protagonist would surely agree: When the odds are against you, it’s better to make a giant splash than a quiet surrender.