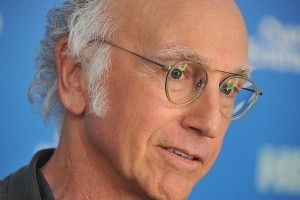 Looks like Larry David has got some friends in this town. His upcoming HBO movie Clear History is shaping up to be a doozy. David co-wrote (alongside some other Curb Your Enthusiasm writers) and will star; Greg Mottola (Superbad, Adventureland) will direct. And the rest of the cast includes [deep breath] Bill Hader, Jon Hamm, Danny McBride, Phillip Baker Hall, Kate Hudson, Michael Keaton, Eva Mendes, Amy Ryan, and JB Smoove [exhale].

THR has a pretty extensive plot description. If you’re super mindful of spoilers, might want to skip on to the next part of the Internet. For the rest of you:

[David’s character Nathan Flomm is] a former marketing executive at a start-up electric car company who, after losing a fortune due to a petty argument with his boss, is publicly humiliated for walking away from his 10 percent of a company now worth billions. Ten years later, his marriage over and reputation ruined, Nathan has changed his identity and lives a simple life on a small island off the coast of Massachusetts … But when his former boss (Hamm) shows up to renovate his summer mansion, Nathan vows to seek his revenge.

Hader [plays the] … henchman of an eccentric local quarry owner (Hall) who agrees to help David’s character settle the old debt. Hudson is set as the Hamm’s character’s glamorous wife. Keaton will portray the erratic and eccentric operator of the quarry. McBride is taking on the best-buddy role. Mendes is set as an islander who takes an off-handed suggestion from David’s character a bit too seriously, causing him no end of trouble. Smoove will play the ex-boyfriend of Mendes’ character. Ryan is on board as the ex-girlfriend of David’s character who has been hiding an explicit secret since before they dated.

It’s no Sour Grapes II … but it sounds pretty great anyway. Also, anyone who is a professional actor of some repute and is not in this movie? Fire your agents!

Rembert Explains the '80s: Puttin' on the Hits