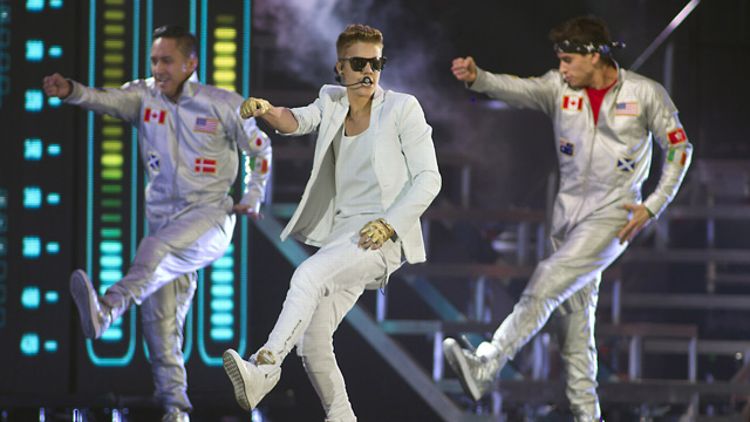 Despite the fact that I know roughly as much about golf as I know about the dietary staples of the ancient Carthaginians, I was kind of getting into the Masters this weekend. There’s just something about the potential redemption of a rampant sex addict that’ll never not be fascinating, you know? So I’m watching while on Twitter, hoping the hive mind will illuminate the drama. But instead of relevant activity about sand wedges or whatever, all I’m seeing is Justin Bieber. And that’s because this weekend our man Bieber visited the Anne Frank House and left a peculiar message in the guest book: “Truly inspiring to be able to come here. Anne was a great girl. Hopefully she would have been a belieber.” Ahh, how foolish of me. Did I really think I could escape Justin, even for a few days, even for a few hours, even for a few minutes? Of course not. Of course not.

OK, now let’s break this down.

On September 1, 1939, Nazi Germany invaded Pola— actually, you know, let’s skip ahead a bit. On Friday, Bieber, touring Europe, stopped by the Anne Frank House. According to representatives of the house, he spent more than an hour on the premises, respectfully and attentively taking in the story of Frank, who spent years hiding from the Nazis in room’s above her father’s business before being discovered and transported to a concentration camp, where she died. The Anne Frank House, thinking it had a nice little PR coup on its hands, innocently posted Bieber’s aforementioned guestbook message on its Facebook page. And the Internet bared its fangs. The general consensus: Justin Bieber is a self-absorbed twit. Also, possibly insane?

The Anne Frank House itself doesn’t see what the big deal is. Over the weekend spokeswoman Annemarie Bekker responded by saying, “He’s a 19-year-old boy taking the effort to come and see the museum, and we’d like to point that out, and I think it’s quite innocent what he put down.” This morning, the museum followed up again: “The Anne Frank House was pleased to welcome Justin Bieber to the Anne Frank House last Friday. We think it is very positive that he took the time and effort to visit our museum. He was very interested in the story of Anne Frank and stayed for over an hour. We hope that his visit will inspire his fans to learn more about her life and hopefully read the diary.” Damn, those Dutch have their heads screwed on straight.

Bieber hasn’t responded directly, choosing instead to post shirtless photos to Instagram with the comment “Breaking news worldwide @justinbieber just posted 2 shirtless pictures he must be going crazy” -funny people #forthefansanyways #dontbecreepin :p”. (Also, alongside a pair of fancy sunglasses: “18k gold D&Gs”) And fan opinion seems to be along the line of this: “Who’s Anne frank and why is Justin visiting her house? Why can’t he come to my house : (”

Most of the context you need to understand the latest kerfuffle comes to us via recent Grantland.com headline “Biebs Spits on a Dude and Loses His New German Monkey.” For various reasons — blossoming adulthood, new friends who like parties, the general corrupting forces of mega-fame — young Justin has been undergoing what seems to be something of a pre-meltdown. That it would happen eventually was probably a given; that it seems to be happening so soon is genuinely surprising, and also a little depressing. And so it’s within these general unshakeable bad vibes that Bieber’s Anne Frank comments are being dissected. If he were tattoo-free and not so shirt-averse and still flopping the ol’ bangs around while palling around in bowling alleys, the Internet probably would have been able to laugh this one off.

OK, yeah, there is a lot to talk about here, vis-à-vis sensitivity around historical anti-Semitism and Bieber’s seeming inability to understand why his words might be hurtful. But, um, you know, this probably isn’t the best forum to get into Nazi Germany? Maybe go check out The Diary of Anne Frank?

I think we’d all be better served by getting into the mind-set of the Anne Frank House about this. Yes, Bieber’s visit was almost definitely a bungled attempt, orchestrated by Svengali Scooter Braun, to counter all the recent bad PR. But at least he went. And what he wrote wasn’t that crazy.

As Allison Kaplan Sommer points out in Israeli newspaper Haaretz, “[Frank] was a teenager with typical hopes, dreams, and yes, obsessions with celebrities and pop stars. One of the details that made her so endearing to youth is the collage of movie stars she kept in her tiny corner of her family’s hiding place.”

Heeb elaborates, “It seems as if, in this case, offense is being taken as the result of an arguably unhelpful, no matter how sincere, effort to preserve the sanctity of Anne Frank’s larger-than-life legacy. Why ‘unhelpful’? Because sometimes that preservation is done at the expense of the actual Anne Frank: the very real teenage girl. That’s a shame, because it’s Anne’s very-real-teenage-girl-ness that makes her story so powerful. Think about it — had Anne Frank been a normal 13-year-old girl living in the year 2013, she almost certainly would have been a dyed-in-the-wool, head-over-heels, fanatical Belieber.”

Do You Like Prince Movies? Podcast: Harrison Ford and Upstream Color