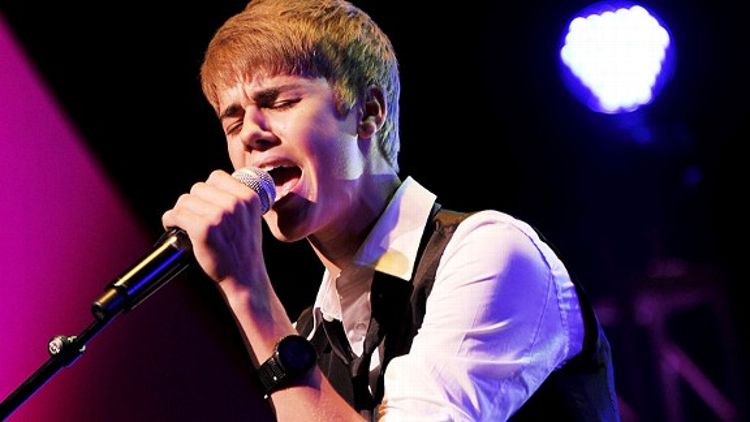 Christmas came early this year, and so did Justin Bieber. The Jonas Brothers are down for the count, Zac Efron is on permanent vacation (and dressing up as his Seventeen Again co-star Thomas Lennon’s Reno 911 character Lieutenant Dangle for Halloween!), and even the Twilight franchise has turned from first blush of vampire and virgin romance to a Tales of the City-type alternative-parenting allegory (those zany Pacific Northwesterners). Although tween poppers have calmed down on sporting purity rings, there is an unfair expectation that teen celebrities be sexual, but only in a flirtatious way, stoking audience desire with a wink and the occasional twist or grind, but never an outright discussion of sex (there’s a lot more leeway for this in R&B than in pop, because “my body” is in the top three subjects R&B is about). At least not until a “controversial” second or third album. But that’s getting too far ahead.

Hugh Grant (51) and Justin Bieber (17) are both in the spotlight for having fathered children. Grant for sure did. Justin siring a child is merely speculation and hearsay at this point. Grant is considered fairly old to be a first-time father, and Bieber inappropriately young. Grant has already taken flak for being at a golf tournament during the birth. Bieber is going to fight the paternity allegations tooth and nail, but even acknowledging them sexualizes him in a way his image doesn’t really allow. For Justin Bieber to be the perfect fantasy boyfriend for underage girls he has to ooze earnest romantic intent, the way Leonardo DiCaprio did in Romeo and Juliet or Ryan Gosling did in The Notebook (and maybe chill on the Gosling worship, ladies. You’re scaring us). Both of those dudes were teen idols, but their teen idoldom didn’t really peak until they themselves reached their twenties, where IRL “Pussy Posses” are more par for the course. If Justin Bieber could have fathered a child, it means we must confront some uncomfortable ideas about the baby Bieb:

1. He Has a Penis
I mean, of course he does. But you’re talking about a 17-year-old boy with vocal command over all kinds of teenage girls and their moms. Maybe it’s just an elaborate media prank to make that anti-abortion quote he gave in Rolling Stone come bite him in the ass.

2. He Knows How to Use It
No matter how young and irresponsible or old and irresponsible you are, your body can still write a genetic check with your name on it that you’ll be responsible for for at least eighteen years. Which is as old as Justin Bieber will be on March 1. Happy birthday!

3. His Image Might Be Bullshit
He cheats on Selena, or they have an open relationship, or it’s a double-bisexual bearding? Anything besides puppy love (they just adopted a puppy) is unacceptable for the Tiger Beat crowd. Polyamory and adultery are for grown-ups in John Cheever novels and San Francisco, damn it. And carefully supervised rainbow parties.

5. He Learned “How to Love” From Lil Wayne
Bieber recently covered Weezy’s goofy emo-acoustic hit. The verdict is that his balls have dropped, vocally. Since his career is based around a prepubescent voice and prepubescent good looks, Bieber is in a bind as to what to do when that voice and those looks mature. He has to roll with it and hope for the best. Maybe he’s (sexually) capitalizing on his popularity because he knows it could flame out after this Christmas album. Unless of course he finds a way to reinvent himself and deliver something on the level of a Justin Timberlake solo album. Which he might! Being a child prodigy who improves on his past triumphs as an adult through hard work and dedication is something Timberlake and Lil Wayne both understand very well. He could do well to follow their examples.