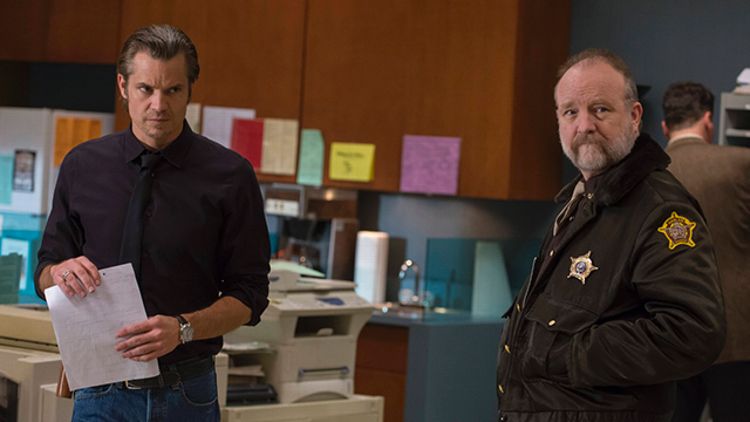 Even if it weren’t a generally fine episode of Justified, “Outlaw” would stand out as the best possible Emmy tape the show has ever given to its once-nominated, never-awarded star. As Arlo Givens dies slowly of being stabbed (in the heart!) with a barber’s scissors, Timothy Olyphant gets the chance to show us a Raylan who acts like he doesn’t care about his father’s slow death (but really does, somewhere deep down). There’s a scene where he almost tears up a little bit on his way to the workplace elevator, then reins it back in because he’s Raylan Givens, and he and his father are through. Hell, his dad’s last words to him were a harsh, guttural “Kiss. My. Ass,” whispered into Raylan’s ear as he leaned over the dying old man. That’s not exactly the best way to leave things for eternity. This isn’t the kind of episode that could win Olyphant an Emmy — not because he’s not terrific, but because the Academy tends to prefer histrionic chest-beating and gnashing of teeth — but it’s the sort of thing he could feel more than proud to submit.

I’ll admit it was a bit surprising that the show killed off Arlo (and as if to drive home it was doing that very thing, the final shot is of Raylan looking over his father’s body in the morgue). Granted, scissors to the heart is one of those things that’s tough to bounce back from, but TV characters with less importance to the core of their shows have recovered from worse. This show is, at least tangentially, about Raylan’s soured relationship with his father, and about how Boyd became the son Arlo never had. Now that Arlo’s gone, both of those relationships have commas at their end instead of periods. That’s similar to how life operates — how often have you felt as if you’d said everything you needed to say to someone you know who has died? — but it’s fairly different from how TV usually works, where there’s almost always a chance for a deathbed conversation that sets things right. By leaving both of these relationships unfinished, relationships still in progress that are now stuck in a state of permanent stasis, the show is making a fairly bold choice.

Granted, there’s plenty going on in this episode aside from Arlo’s slow, painful death. The show has reached that point in the season that every Justified season does, where it seems to be barely skating ahead of the plot, with so many complications that it’s hard to imagine the show tying everything up in a satisfying way. When an episode gets this busy, it can be hard to leave time for meaningful character moments, but “Outlaw” has Raylan’s not-mourning (which disguises his real mourning) over Arlo, so it’s able to make the machinations going on in its Boyd Crowder half that much more clinical and plot-driven. All the better, these machinations conclude with Boyd requesting his new rich buddies help him get a Dairy Queen off the ground, because those things are licenses to print money in the summer. (Even if this is somehow product placement — and I strongly doubt that it is — I love it, because Boyd Crowder saying the words “Dairy Queen” with that kind of zeal is something I’m glad I lived long enough to see.)

Recapping the adventures of Boyd (and his trigger-man, Colt) could take the rest of this review, but I have other things I’d like to touch on, so let’s keep it brief. Basically, Wynn and the Dixie Mafia are getting tired of Boyd’s search for Drew Thompson, which has gotten no closer to the man in the past week, while Boyd finds himself trapped between the rich folks he met last week and the man they want him to kill, who has a henchman pull a gun on him and tell him to get away from his house. Sensing a way to make lemonade out of a bunch of lemons, Boyd says to hell with it and has the Mafia — in the guise of some guy who’s ripped off a cop uniform from a dry cleaner’s — take out both the man he’s meant to kill and the man who gave him the orders to kill, thereby letting everyone know he’s not going to be anyone’s lapdog.

Granted, he’s saved by his special “being Boyd Crowder” bonus, in that he gets rescued by Raylan when he’s almost hauled off by the fake police officer (in a thrilling sequence that’s followed up by a scene where Art muses that he was pretty sure Raylan wasn’t a cop killer, with just enough emphasis on the qualifier to let you know he wouldn’t have been surprised if Raylan actually was). But Boyd’s power play actually works, to some degree: He’s on track to get that Dairy Queen, and maybe even sweep Wynn aside to become the Detroit Mafia’s Harlan point man, as well. Of course, he’s got to find Drew Thompson first.

I’ve seen some grumbling from other critics and fans of this show that the Drew Thompson arc is threatening to swallow the series whole. I’m not really feeling that for a variety of reasons — not the least of which is that I think it’s still less complicated and show-consuming, on the whole, than whatever was going on last season — but foremost among them is that the series has given both Raylan and Boyd viable reasons to want to find Drew, and it’s created a scenario where both of them will suffer greatly if they don’t find him. This has more or less made them competitors, even if neither of them realizes yet just how important finding Drew is to the other man.

The show is always better when it’s pitting Raylan and Boyd against each other, while also leaving a plausible reason for them to team up at a moment’s notice. It’s not for nothing that the season’s best episode was the one where the two went into the hills to see if they could find Drew up there. But the stakes here are pretty high. Raylan isn’t just trying to bring in Drew to help the marshal’s office bring down Theo Tonin; he’s now also trying to bring his rancorous relationship with his father to some sort of symbolic close. Boyd isn’t just trying to end Drew’s life to help out his potential business partners; he’s staked a substantial part of his future, of his dream of the Crowder name being a good one in Harlan, on finding the man. The stakes are meaningful for both men, and that makes the story that much better.

In addition, the center here is much stronger than last season’s. Although the story has wound all over the place, it’s done a fairly good job of distracting us from the fact that neither Boyd nor Raylan is any closer to finding Drew than they were before. They’ve managed to sort of zero in on a general group of men, but that’s about it. All the things swirling around the edges of the story — Shelby’s attempts to get the testimony from Ellen May that will bring Boyd down, Colt’s search for Ellen May, Johnny’s deal with Wynn, whatever Tim and Rachel are up to — are just supplements to the real game, which now comes brutally into focus. Both Raylan and Boyd need to find Drew Thompson; only one of them can get there first.

Todd VanDerWerff is the TV editor for The A.V. Club. His writing has also appeared at Hitfix.com, The Los Angeles Times, and The House Next Door.