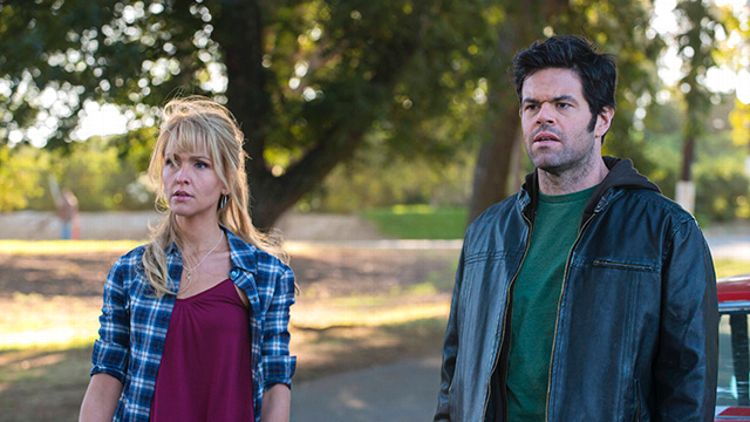 Remember all of that stuff a couple of weeks ago about Boyd Crowder marching to the beat of his own moral compass? Yeah, we should probably just forget I ever said any of that, because when Sheriff Shelby describes the man who got him where he is as someone unfettered by a traditional moral compass, the show seems intent on proving that might be the case. Now, Boyd has good reason for needing Ellen May dead. She knows stuff that could bring down the Crowder empire, and she’s not exactly someone who can keep a secret locked up tight. Even though she didn’t breathe a word of Delroy’s death to Billy and Cassie, she’s finally figured out that her knowledge of that crime is the reason Ava and Boyd want to send her away, and once she figures that out, the rest of the episode turns into a de facto homage to The Sopranos’ tremendous “Long Term Parking” — Colton drives her to what is intended to be her death, only to lose her when he stops to use the restroom.

To some degree last night, Justified wanted to have its cake and eat it, too. The characters on this show can do dark things, but it’s hard for them to be as dark as, say, Tony Soprano and the gang, because the show’s tone can’t really carry something so horrible. There have been times when it’s been able to — the finales for both Season 2 and 3 have some seriously awful moments — but for the most part, this is a show that gets by on an easygoing sense of humor and a jackass’s sense of pure confidence. It’s the kind of show where two guys walloping on each other is almost played for Looney Tunes-style laughs, rather than depicting violence with real rigor 100 percent of the time. (Please understand I don’t mean this as a complaint; Justified’s high entertainment factor is one of the best reasons to watch it.) So the show is rightly conscious of the fact that having Boyd order the murder of a woman who’s been played about as innocently and sweetly as a trailer park prostitute ever could be just might upset its own apple cart.

Therefore, it contrives to have Boyd order the murder — to show that he means it — but also to have Ellen May escape, because Boyd’s men aren’t exactly reliable in these sorts of situations. He doesn’t have a Silvio Dante or a Mike Ehrmantraut, a loyal lieutenant who’ll always get the job done. Plus, the show is trying to sow a little dissension in Boyd’s ranks this season — assuming that when Johnny went to Wynn last week, it was genuine and not a long con of Boyd’s — so it makes sense to have him attempt something so heinous that even Ava seems a little taken aback. But while I can understand the story sense of all of this, having Ellen May escape seems just a little too convenient, a way to prolong this particular story, so that Boyd could potentially change his mind or have this problem hanging over his head for as long as the writers need it there. (Unless, of course, they decide to have Ron Eldard stalk a terrified woman through the Kentucky backwoods for a solid hour next week, which would be jarring and problematic in a whole other way.) It’s too early to be seriously speculating about all this, of course, but the whole thing struck me as too easy, a cliffhanger that’s just there for the sake of a cliffhanger.

The rest of “This Bird Has Flown,” which amounts to Raylan and Rachel chasing Lindsey and Randall all over Kentucky in pursuit of his hard-earned cash (which, you may have noticed, is already gone before Raylan seriously gets on the couple’s trail,) is a lot of fun. Justified often does these more or less standalone hours early in a season, and that’s one of the things that keeps it from feeling overburdened, I think. I like Homeland a lot, but one of that show’s failings — particularly in Season 2 — is that it can never take a break from its main story line to do something else. (The one time it sort of did, sending its two protagonists off on a would-be romantic weekend together, it turned into everybody’s favorite episode.) This is the problem with a lot of serialized TV, actually: The relentless need to keep the story line moving forward forces the plot and characters into corners they have to battle implausibly out of. Not every show can be Breaking Bad. That Justified is content to do the occasional standalone is a point in its favor, even if the word “standalone” has become a dirty one to many TV viewers. So far as I can tell, the only time the words “Drew Thompson” turned up last night was when Shelby was looking him up, and that’s fine by me.

As far as Justified standalones go, I don’t know if this was up there with the very best. But it had some enormously funny sequences, including one scene where Raylan opened up the back of a van said to contain his money and found a bunch of chickens, which essentially made the episode all by itself. (I didn’t know that I needed to see Timothy Olyphant skeptically eyeing a chicken before I died, but now that I have, I’m glad I got the chance.) I’m also pleased with the way Rachel has been better integrated into the show this season, with Raylan pretty much taking her under his wing. And the show’s ability to find new, weird little facets of rural Kentucky life to explore — this week, the cock-fighters and their rooster-peddling operation — is still surprisingly adept after four seasons. Yeah, it’s the same old stuff: Raylan needs to run somebody down, so he follows lead after lead, encountering a series of colorful characters along the way. But it hasn’t gotten old yet, and I don’t expect it will anytime soon.

Still, what’s great about this whole story line is that it finally builds to that fight between Raylan and Randall that the show has been teasing for three episodes now. It’s been awhile since Raylan got his ass good and kicked, and he takes a beating in this scene, even with a shotgun that shoots sandbags and puts a serious hurt on Randall. The sequence is almost comedic, even in the way it’s shot, and I think that’s the right decision. The stakes here are so low — they’re basically all just about Raylan trying to prove himself the big man again — that to make too much of this would be a bad call. By the time Lindsey uses the sandbag shotgun on both of her former lovers, I was grinning unabashedly. The episode walks the tightrope of making Randall a terrifying nutcase — but not too terrifying — fairly well, which allows this story line to remain relatively minor in the show’s run. If Raylan is done thinking about the Randall situation a week from now, it won’t feel strange; it’ll feel like he’s just trying to put it behind him.

I’m not sure the show is walking that tightrope with Boyd successfully just yet. Certainly, these writers are very good at balancing drama and comedy, but in having Boyd order the death of Ellen May, they’ve backed themselves into an interesting corner indeed. There’s no good way to evaluate this whole story line (or even just the first chapter) without seeing how it plays out, but the Boyd story line feels as if it takes place in essentially a different universe from the one where Raylan’s does — a universe where poor Billy is dead after last week’s snake bite, and a universe where there are real, lasting consequences — and there’s a real danger that the show’s tone could become unbalanced. Then again, these are all questions for next week, and we’ll see where that leaves us.

Todd VanDerWerff is the TV editor of The A.V. Club. His writing has also appeared in the Los Angeles Times, HitFix, and The House Next Door.