Just How Good Is Al Pacino In Jack and Jill? 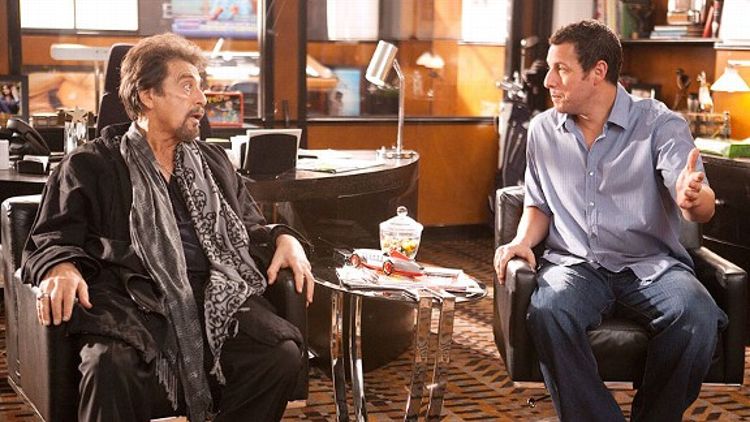 Riding a tsunami of critical disapproval into theaters this weekend is Jack and Jill, in which Adam Sandler stars as twin siblings of both sexes. Predictably, Sandler’s performances have gone unheralded by critics. Al Pacino, though — who plays an exaggerated version of himself who falls in love with Jill while being wooed by ad executive Jack to star in a Dunkin’ Donuts commercial — has really distinguished himself. In fact, these are probably Pacino’s best reviews in a decade. Below, a sampling of the acclaim.

“Pacino plays a scary, cartoonish and more over-the-top-than-usual version of himself in this farce and scores big laughs with every entrance.” —Roger Moore [Orlando Sentinel]

“It’s pretty sad if you’re a comic and Al Pacino is the funniest thing in your movie. Pacino will probably seem most funny to people who haven’t seen most of his recent films, where he’s been bordering on self-parody for nearly a decade.” —Lou Lumenick [NYP]

“With bizarre commitment, Pacino endures one indignity after another — as himself, as Richard III and as Don Quixote. Why? You start to wonder if they drugged him.” —David Rooney [THR]

“It’s a dedicated performance that goes far beyond being simply preening masquerading as self-mockery — Pacino shows more focus and less hamminess than he has on screen in ages — and if it’s one that the movie can’t really support, well, it’s hard to imagine the movie that could convincingly contort itself around Pacino rapping about Dunkaccinos, wooing someone with a cheesecake shaped like his face and getting into a fight with a ceiling fan.” —Alison Willmore [Movieline]

“It’s not quite John Malkovich in Being John Malkovich, but Pacino has his moments. In the Dunkin’ Donuts commercial we see near the end, the septuagenarian movie star breaks out some dance moves recalling his Big Boy Caprice in Dick Tracy. There’s more crude energy in those 32 seconds than in the rest of “Jack and Jill,” so Pacino-as-Pacino’s stunned reaction doesn’t really make sense. Yet his deadpan line readings in this one scene constitute the finest acting Pacino has done, in comedy or drama, in years. —Michael Phillips [Chicago Tribune]

“[Jack and Jill] is a dull drag-show routine headed nowhere until Pacino (playing a self-important version of himself) begins stalking Jill, along the way riffing on his dearth of Oscars and pretentiously pretending to speak foreign languages. His self-mockery is delivered with wild-eyed zest.” —Nick Shager [Village Voice]

“What to make of Al Pacino, then, who plays ‘Al Pacino,’ flamboyantly theatrical, more than a little batty, and hot for Jill? There’s a slight whiff of dinner-for-schmucks game-playing to his participation here, but Pacino has been a drag version of Pacino for so long now he somehow fits into Sandler’s piñata party approach like a glove.” —Robert Abele [LAT]

“The notion of the celebrated thespian quoting Stella Adler in an attempt to seduce a drag-clad Sandler certainly seems funny in theory, but by the time he performs a rap number incorporating his lines from Dog Day Afternoon and The Godfather: Part II, all admiration for his gameness has twisted into queasiness. Distressing though his role may be, Pacino at least expends a good deal of effort in performing it, which is more than can be said for Sandler.” —Andrew Barker [Variety]

“As it happens, though, it’s neither Sandler (as Jack) nor Sandler (as Jill) who carries the movie. It’s Al Pacino, who is downright hilarious and remarkably game as a wild-eyed version of himself.” —Elizabeth Weitzman [NYDN]

“This is a real supporting role, and unlike Robert DeNiro, who often sleepwalks through his for-the-paycheck jobs, Pacino gives the movie his all. Method is Method, whether you’re working with David Mamet or Dennis Dugan. — Rene Rodriguez [Miami Herald]

“Pacino gets the one good joke here, making fun of his lone Oscar win. But seeing him get aroused by a puffy Sandler, including laying in Sandler’s bed’s sweat stain, is funny-weird, not funny-ha-ha.” —Scott Bowles [USAT]

“There are a few funny moments in Jack and Jill, most of them celebrity cameos that also serve to affirm what a cool, connected celebrity Mr. Sandler is. (Who, at this point, is arguing?) The most sustained of these is the appearance of Al Pacino as himself, falling for Jill and giving the film a jolt of genuine zaniness. I’m sorry to say that this may be Mr. Pacino’s most convincing performance in years.” —A.O. Scott [NYT]

Songs of the Week: DMX Gets an Assist From Dr. Drew