Just a Couple of Normal People on a Stage: LCD Soundsystem’s Shut Up and Play the Hits and Katy Perry’s Part of Me 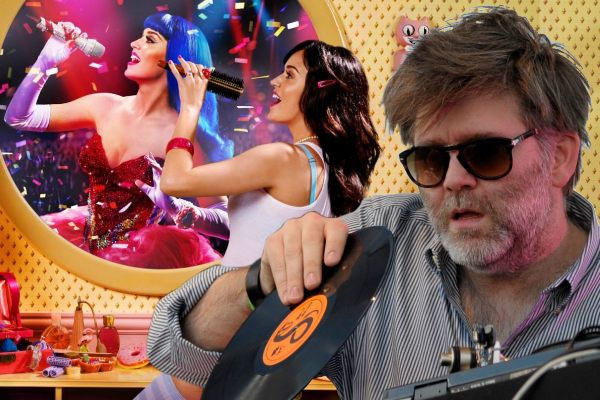 I had been a music snob for what seemed like a long time when LCD Soundsystem’s debut single, “Losing My Edge,” came out in 2002. I found it incredibly easy to identify with James Murphy’s freaked-out, aging narrator and his complaints about the Internet generation’s easy access to and superficial knowledge of every cultural artifact that came before them. How dare those kids come for our Can CDs and Modern Lovers records and No Wave compilations and avant-garde jazz tapes! Didn’t they know that tracking down obscure reissues and cataloging arcane musical genres was our life’s work?

Ten years and 20 billion torrents later, I have heavily revised my stance, just as it has become clear to me that in 2002 I was very much an exemplary kid coming up from behind to politely ask James Murphy if I could browse through his record crates. Although it stands as an indelible snapshot of the transition into the music blog era, and its dance punk sound remains remarkably fresh, the specifics of what James Murphy is talking about in “Losing My Edge” transcends time periods.

The feeling of being displaced in power and position by a new class of younger strangers is universal. Striving to be cool turns into struggling to stay relevant. In order to maintain perfect cred forever you can either try to go out early on a high note, or hang on long enough that you willfully buck the changing of trends. In the best-case scenario you turn out to be the next Neil Young.

Ten years after “Losing My Edge,” I find myself genuinely horrified by kids 10 years younger than me who know everything I know and more. It was inevitable, and yet somehow I thought it would never happen to me, since every single generation thinks they’re special. All of these feelings came bobbing up as I watched Shut Up and Play the Hits, Will Lovelace and Dylan Southern’s excellent documentary about LCD Soundsystem’s final sold-out show at Madison Square Garden.

Shut Up and Play the Hits chronicles the lead-up to LCD Soundsystem’s last show, following Murphy as he putters around at home, hangs out at the venue, and is interviewed by (Grantland contributing editor) Chuck Klosterman at a restaurant. Murphy is charming, warm, and self-depreciating, not the arch narrator he sometimes plays in his songs. He expresses doubt every step of the way about whether he made the correct choice in choosing to end the band.

Katy Perry may not be the first name that comes to mind when you think about indie cred, but in her officially sanctioned documentary, Katy Perry: Part of Me (directed by Dan Cutforth and Jane Lipsitz), she works very hard to dispel the notion that she ended up on a stadium stage by some manager’s design, sculpted into those candy-paint latex dresses by some pop Pygmalion. The film makes good use of 10-year-old footage of Perry, then 18, where she lays out her game plan for world domination and displays a strong will and stubbornness about succeeding that served her well while she was being bounced around labels and told to change her look.

It’s a large part of her personal mythology that Perry grew up constantly hearing people speak in tongues but never heard secular music until her teens, due to a strict ban by her reformed-acid-dealer-turned-preacher parents. Although she always had a strong alto voice, and for many years sang exclusively Christian songs, hearing Freddie Mercury on a Queen album at a friend’s house opened up the real possibilities of music for her. It seems obvious that Perry, who heard herself in a kohl-eyed tenor dandy rock star, would fall for Russell Brand.

On camera, Katy is charming and naturally goofy. Her sexpot image is toned down and humanized with behind-the-scenes footage where she is groggy, puffy, and otherwise imperfect looking. Onstage she is a different creature, embodying the heroines from forbidden fictions of her youth like Alice in Wonderland and The Wizard of Oz in over-the-top costumes and makeup while running through her catalog of Bay City Rollers pop stompers and Pat Benatar–style, broken-hearted-tough-girl ballads.

Whether success was worth it is the major underlying focus of both films. The victory once desperately yearned for creates a strange kind of existential emptiness when achieved. After you’ve fulfilled your dream, what do you do for an encore? What if you’re still not satisfied? What if you’ll never be? Murphy and Perry both battle with the awareness that their teenage dreams might well interfere with their adult dreams.

Murphy is so paralyzed by the idea of potentially ruining his perfect game that he breaks up LCD Soundsystem after 10 years and three albums. He tells Klosterman he wants to settle down and have a family, that he desires the kind of stability that waking up in a new city every night simply can’t provide, no matter how cool the crowd or loud the applause. But almost immediately he is unsure whether it was the right thing to do.

Shut Up and Play the Hits takes its cues from classic rock movies like Jonathan Demme’s Talking Heads concert film Stop Making Sense and Martin Scorsese’s The Last Waltz. While Part of Me has more of a Madonna: Truth or Dare feel to it, there are enough shots of James Murphy grooming and sitting in bed during Shut Up and Play the Hits that I couldn’t be entirely sure Warren Beatty wasn’t lurking in the background. The secondary star of the film is Murphy’s pet dog, who provides great reaction shots.

There is no Water Bottle Fellatio Moment in either movie. These are rock films without the excess, no drug binges or groupies in the frame. Murphy enjoys making coffee and Perry drinks a beer at a water park. Everything goes into the performance. Perry’s numbers are entertaining and cut with a mercifully light touch. The final LCD Soundsystem show goes off without a hitch. The band is insanely tight and Murphy pours his whole heart into the songs, peaking with a cover of Harry Nilsson’s sweat-soaked epic “Jump Into the Fire.” Both films have shots of fans crying in near religious ecstasy.

It was fascinating to recently read Bruce Springsteen explaining that his legendarily long shows were fueled by self-loathing, extended not just out of a populist desire to entertain. Springsteen stayed onstage as a way to avoid dealing with his private demons and the realities of his offstage life. As social media proves, public attention is dangerously addictive. And any euphoric high comes with an equivalent low.

We watch Murphy crashing from the best and last LCD Soundsystem gig of his life, relieved but also visibly struggling with regret. Katy Perry cries and heaves with sadness moments before going onstage in a spinning peppermint wheel bra, plastering on a smile to sing “Teenage Dream,” the power pop love song she wrote about her then budding romance with Brand, before the largest crowd of her stadium tour. It’s a classic melodramatic climax, The Red Shoes with maraschino cherry nipples.

Perry’s wish to show us just how normal she is comes to bite her in the ass by way of the movie’s third act, in which her marriage unexpectedly unravels, due to her grueling tour schedule and a lack of willingness to travel on Brand’s part. Obviously the documentary is edited to shift your sympathy toward Perry, but her relationship with Brand comes across as very genuine in their scenes together. She is not the dumb bunny with whipped-cream tits the media often makes her out to be. She is a canny songwriter and businesswoman with whipped-cream tits.

An early music video of Katy’s sees her name-checking Chicago outsider musician Wesley Willis. She tosses around words like “feminist” and “leader” when talking about herself. Although she tried way too hard during her turn hosting on SNL, she has a definite knack for physical comedy, especially facial expressions. It is incredibly sad to hear her praise Brand for being such a capable and supportive partner, knowing how that story unravels. A late scene where Katy tries to seem happy while watching her sister get fitted for a wedding gown is heartbreaking.

Murphy and Perry are both desperate to show us that despite their glamorous careers, they are real people, affected by the same kinds of tedious and difficult work/life balance issues as everyone else. The genre convention of showing the intimacy between the lead performers and their bands of employees is strictly adhered to. Both singers acknowledge being control freaks but want to be viewed as good, chill bosses. The most precious things in a touring musician’s life are sleep and time off. Maintaining relationships with people is difficult enough without being the god of a traveling planet.

And yet despite this projection of normalcy, Perry and Murphy both acknowledge that something happens onstage. They become bigger than life. Murphy describes to Klosterman his inability to reconcile the hero worship of his youth with the mature realization that his heroes were ordinary guys with human foibles and utility bills. Even David Bowie and Lou Reed. A friend of mine once spotted Lou Reed buying an orange Gatorade at a convenience store, and I couldn’t get over the mundanity of this image. Lou Reed replenishing his electrolytes. James Murphy making coffee in the morning. Katy Perry crying over a dude.

If our heroes are gods, then we are naturally horrified when our gods age, weaken, and die. If they are human, why does it feel so natural to build up talented people into idols? We are desperate to preserve the mystique even after we know better. Despite his well-publicized retirement as front man, James Murphy has toured as a DJ consistently ever since, perhaps having found his edge more difficult to lose than he hoped. Maybe he doesn’t want to give up on the profoundly mysterious process of finding out how sound and presence alchemize. Or maybe he just can’t stop.