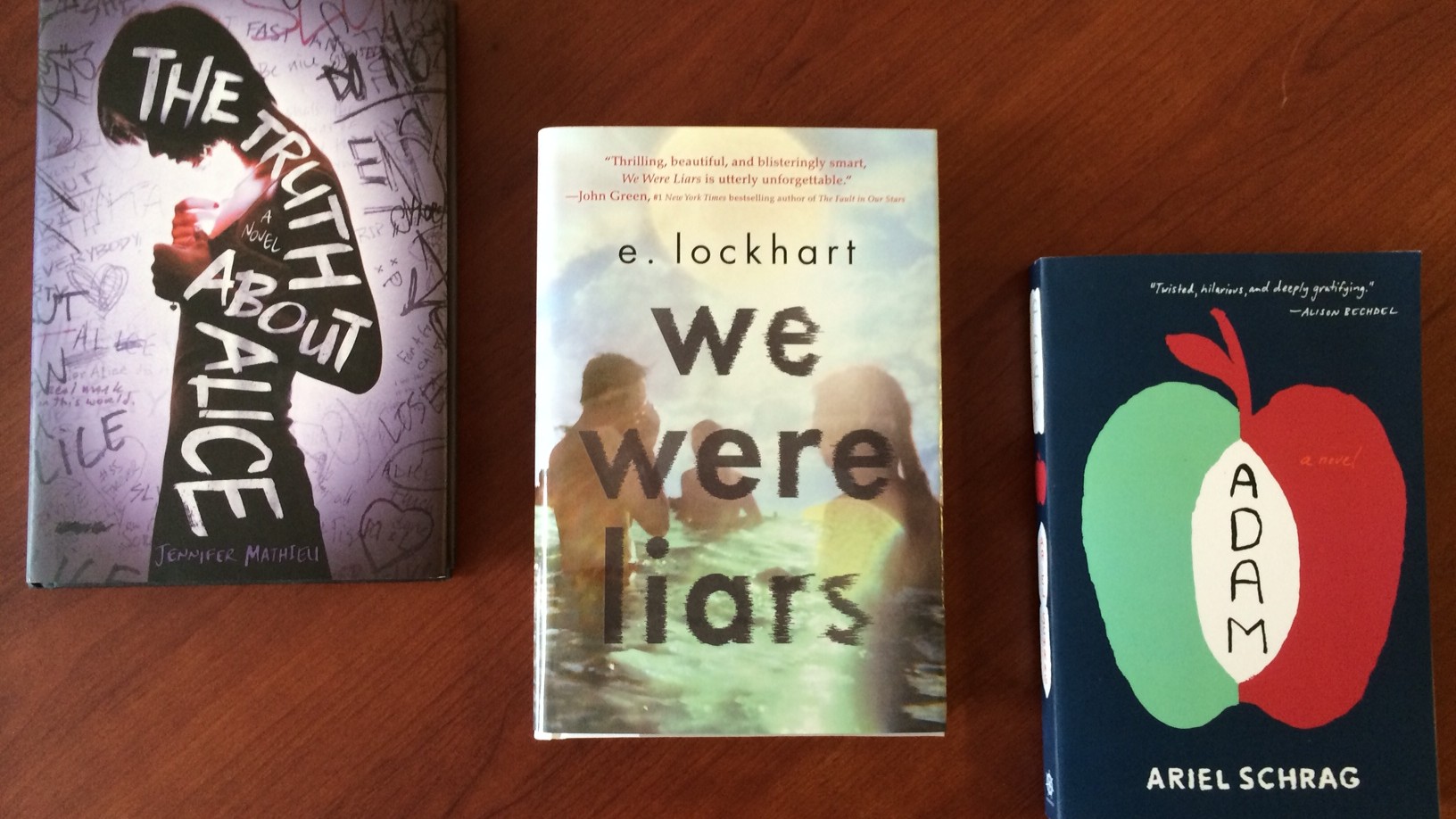 If the record-breaking ticket presales of The Fault in Our Stars is any indication, young adult fiction is having a bit of a moment. And though plenty of books in the genre have grossed well at the box office, they’ve been exclusively fantasy/sci-fi series. Young adult books tell some of the best stories about identity. After all, adolescence is the time when we — through much angst and confusion — discover who we really are. Perhaps it’s a sign of a fast-maturing genre that more of the best sellers, like John Green’s book, are grounded in very real situations.

Jennifer Mathieu’s The Truth About Alice confronts the darkest side of adolescent cruelty. In the first chapter, we learn two things about Alice: (1) At a party, she slept with two guys at the same time; (2) she’s responsible for the car wreck that took one of those boys’ lives later that night.

It’s a careful trick that Mathieu plays. We immediately empathize with Alice. She’s clearly the victim of rumor and bullying, but most of all, of the selfishness of others. And yet, structurally, our only descriptions of Alice are given through the delicate viewpoints of the classmates who have nothing but terrible things to say about her. Josh, who survived the car wreck, withholds information to protect his dead friend’s loved ones — by associating Alice with the accident, he is able to give his grieving friends and relatives someone to blame. Kelsie, despite being Alice’s former friend, ignites rumors that Alice has had an abortion, as a means of hiding her own pregnancy. The central truths turn out to be less about Alice and more about the people surrounding her.

The novel is written like a mystery — a fragmented portrait of a woman wronged by her peers (think modern Hester Prynne or Caddy Compson). The quiet-but-hot eccentric descriptions of Alice evoke a manic pixie dream girl thing (her hair is described as “cut sort of pixie-style,” which, like, come on), but it seems appropriate for a story about misinterpreting someone’s personality in order to project one’s own. The satisfying moments of Mathieu’s novel turn out to be less about discovering the truth about Alice than the truths of those around her — or perhaps more accurately, its cautionary message regarding the danger of establishing one’s identity in opposition to another.

Kelsie is the book’s best character. Her first betrayal is scrawling lies about Alice on the wall of the women’s bathroom at school. “Lying about Alice and starting the Slut Stall was something Kelsie from Flint wouldn’t have ever done,” she says. “So I guess that’s why I did it.”

Secrets are also at the center of We Were Liars, E. Lockhart’s ninth young adult novel. And they aren’t just regular secrets — they are rich people secrets. Every summer since Cadence Sinclair Eastman was 8 years old, the Sinclair family has vacationed at their home on the private island of Beechwood. They are the WASPiest of WASPs, the upper crustiest of upper crusts. But when Cadence’s father abandons the family, she becomes more protective of her summers there. She takes solace in the time she spends with Mirren, Johnny, and her first love, Gat. Together, they are the Liars; Beechwood is their domain.

Though the book jumps around in time, the brief moments all surround an accident on the beach that put Cadence in the hospital and blacked out her memory of the events. But despite its bland framing (lol, amnesia), Lockhart gives us glimpses that blur together in the way long summer afternoons bleed into nights. It’s a novel with a strong voice — equal parts lyricism and economy. The isolation of Beechwood creates a claustrophobic tension. But as much as Cadence doesn’t want to admit it, the island exists as an escape from her own reality. Mirren says, “You know how, when you come to Beechwood, it’s a different world? You don’t have to be who you are back home. You can be somebody better, maybe.”

If there’s a complaint to be made about We Were Liars, it’s that none of the characters — not even the other Liars — ever feels as complete as Cadence. The book is terrifically written and swiftly paced, but the voice sometimes overpowers its own attempts at humanity (the fairy tale–like interludes are a bit on the nose as well). Still, Lockhart has a lot of smart ideas at work here. Unlike most young adult novels, the teenagers who inhabit Liars have a preconceived idea of who they are. And it turns out that this identity, built largely around material well-being and privilege, is one they’ll do anything to protect.

Adolescence isn’t all doom and gloom, though, and if nothing else, Adam proves that the most nuanced meditations on secrets and identity can also be lighthearted and uproariously funny. Ariel Schrag’s debut novel toys a bit with our expectations of a high school novel. Adam is in the uncomfortable middle ground of not-popular-but-not-unpopular status, and after an unfortunate attempt at kissing his first girl, he decides to flee to New York to hang out with his college-age lesbian sister, Casey, for the summer.

Time and place are important factors in Adam. It’s the summer of 2006, one that saw some of the city’s strongest demonstrations for gay marriage and transgender rights. Adam finds himself now a member of New York’s trans community — or at least a portion of it that manages to be both concerned about serious issues and wildly bacchanalian. I’d been emailing with a friend of mine who is a trans woman about the book. She commended Schrag for “the way it talks about LGBT internal politics and portrays the ways people get comfortable (and faux-comfortable) talking about that stuff.”

Like any teenager, Adam is preoccupied with getting laid. Actually, he’s even more concerned about appearing to be the kind of person who gets laid. It’s funny how high school dynamics propel us from adolescence to adulthood by peer pressure — I suppose the mark of any teenager is to not want to be treated like one — and Adam captures that feeling with a painfully funny sense of irony. (One of the best scenes involves Adam lying to his bro-friend from home about how much sex he’s having.)

Still, I have hesitations about Adam’s central premise. It is very much a story about first love, and Adam falls for a girl named Gillian, a lesbian who has mistakenly taken Adam for a transgender man. They eventually become intimate, but there is the questionable notion that Adam is having sex under false pretenses. Some of his transgressions are pardoned by a later reveal toward the end of the book, but Schrag lets the moral implications slide too much — especially considering that Adam’s deception of Gillian is being used as a plot device.

And yet, of these three great young adult books, Adam is still the one I’d recommend the most strongly. There’s so much to love about the novel — both in its narrative and what it’s trying to accomplish — that I think will be powerful to any reader. If one of the young adult genre’s strongest features is its accessibility, Adam will be an entry point to a world that is, for many people, unfamiliar and uncomfortable. Colorful and smart, the book understands that the struggle to discover one’s identity is somehow both ubiquitous and unique. With deep empathy and wit and humanity, Schrag has accomplished the seemingly impossible challenge of making the experience of marginalization and isolation feel universal.

Strength on the Ball: “Everything I know about morality and the obligations of men, I owe it to soccer.” Aleksander Hemon invokes this quote from Camus in the opening essay of The Matters of Life, Death, and More, a brief, digital-only collection of his writing about World Cups past. As only one of the most venerable essayists can, Hemon writes with the eye of a humanist, a storyteller, and an obsessive fan. Fans of Hemon’s work will find these pieces a fair bit lighter than his last collection, the excellent-but-extremely-depressing The Book of My Lives. As a contrast, Matters is a delightful read, one that will further stoke your excitement for the opening games of next week’s tournament.

Not Asian Men: A couple of years ago, Jenny An wrote a controversial post for XOJane called “I’m an Asian Woman and I Refuse to Ever Date an Asian Man.” An lays out that the stereotypes of Asian men make them undesirable according to a societal standard that puts white men at the top. Consider Alex Tizon’s Big Little Man a more nuanced exploration of that idea and its social ramifications. For example, Tizon laments the exclusion of Asian men in major Western media, a “symbolic annihilation” of sorts. (Glenn from The Walking Dead is one of the few examples Tizon can conjure, and even he has to be regularly rescued from zombies by his white girlfriend, Maggie.) Or how about the trope of Western men conquering the East? In the film The Last Samurai, Tom Cruise is LITERALLY THE LAST SAMURAI. It sounds like a lot of whining, but Tizon balances his perspective with personal anecdotes, interviews, and gumshoe journalism (dude has a Pulitzer). There’s a greater message here that the stereotypes of conventional masculinity are damaging to everyone, whether an individual embodies them or not.

Family Matters: Daniel thought his parents were enjoying their retirement, living happily in a farm town in Sweden. Not the case! In Tom Rob Smith’s The Farm, Daniel finds himself dissecting his mother’s intricate conspiracy theory behind the disappearance of a young girl — one that might involve Daniel’s father. “If you refuse to believe me, I will no longer consider you my son,” his mother says. With his father claiming that his mother has had a psychotic break, Daniel finds himself torn as to whom to trust. But the greater dilemma is that siding with either one will forever sever his relationship with the other. The Farm is savvy and twisty. The stakes here are lower than those in Smith’s Child 44 international spy series, and yet they feel so much greater in The Farm. Perhaps there’s no greater emotional weight than one that involves family.

Filed Under: Books, Books of the month, The Truth About Alice, We Were Liars, Adam

Nerdsplaining Warhammer: Which of Your Favorite Actors (Besides the 'Fault in Our Stars' Kid) Like to Hand-Paint Tiny Figurines?