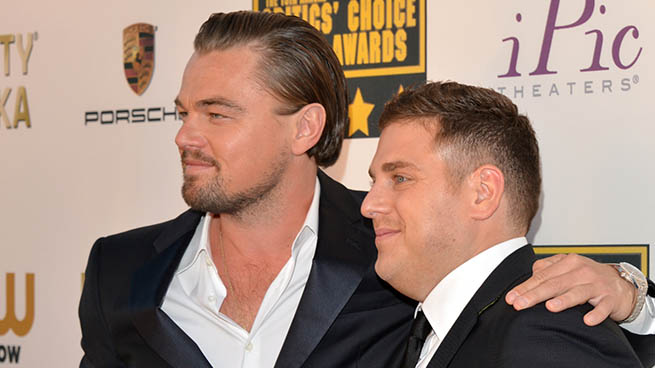 Remember Richard Jewell, the security guard at the 1996 Olympics in Atlanta who found a bomb in a bag and cleared the area, resulting in two deaths and 111 injuries instead of many, many more? The guy about whom ESPN just made a 30 for 30 short? Jonah Hill’s going to play him in a movie, and he’s going to act alongside his Wolf of Wall Street costar/Titanic re-creator Leonardo DiCaprio. Per Deadline, Leo will play “a Southern attorney who mostly did real estate closings and seemed in over his head, but [who] guided Jewell through a hellish Twilight Zone that went on even after the FBI officially cleared Jewell’s name three months later.” That’s right — “cleared his name.” Because after his act of courage, Jewell quickly found himself under the magnifying glass as a suspect. This is going to be a heavy movie. Hill and DiCaprio will both produce, although there’s no info about who’s writing or directing yet.

Netflix has ordered its third season of House of Cards, 10 days before Season 2 premieres. Kevin Spacey and Robin Wright are onboard; Frank Underwood will be president of the world by the end.

Billy on the Street is coming back soon, too! So many good newses!

The Walking Dead’s Norman Reedus says all the last episodes of this season — all EIGHT of them — are the show’s best yet. Hmm — guess we’ll see. (Also, Lauren Cohan, who plays Maggie, is set to visit Archer for a few episodes.)

When Action Bronson wants to smoke weed for a Grantland profile, everything’s cool. But when he tries to do it onstage in Portland? DISASTER.

Ask Jerry Seinfeld why Comedians in Cars Getting Coffee features basically all white males as guests and he’ll say: “This really pisses me off … People think it’s the census or something. This has gotta represent the actual pie chart of America? Who cares? It’s just funny. Funny is the world that I live in. You’re funny, I’m interested. You’re not funny, I’m not interested. I have no interest in gender or race or anything like that.”

Justin Bieber will never have an easy time at Customs now.

Look, I don’t want to have to waste your time on pregnancy rumors. BUT WHAT IF EVA MENDES AND RYAN GOSLING HAVE A BABY???!!

Thor: The Dark World’s gag reel is better than you might expect. [via]

20th-anniversary alert: Nas’s Illmatic. There’ll be a re-release, a tour, and a documentary.

Contrary to earlier reports, Laura Prepon will appear in most of Orange Is the New Black’s second season.

And here’s a new trailer for Divergent, which will help you better understand Divergent if you’re too cool to read young-adult novels.
[protected-iframe id=”1c235c69c508f068de355b06891fd4ef-60203239-57808363″ info=”http://hub.video.msn.com/embed/5abacf50-d259-4b3b-a759-2ba5c1ebc6cb/?vars=ZnI9c2hhcmVlbWJlZC1zeW5kaWNhdGlvbiZzeW5kaWNhdGlvbj10YWcmY29uZmlnTmFtZT1zeW5kaWNhdGlvbnBsYXllciZsaW5rb3ZlcnJpZGUyPWh0dHAlM0ElMkYlMkZtb3ZpZXMudWsubXNuLmNvbSUyRnRyYWlsZXJzLWFuZC1jbGlwcyUzRnZpZGVvaWQlM0QlN0IwJTdEJmNvbmZpZ0NzaWQ9TVNOVmlkZW8mbWt0PWVuLWdiJmxpbmtiYWNrPWh0dHAlM0ElMkYlMkZtb3ZpZXMudWsubXNuLmNvbSUyRnRyYWlsZXJzLWFuZC1jbGlwcw%3D%3D” width=”540″ height=”304″ frameborder=”0″ scrolling=”no”]