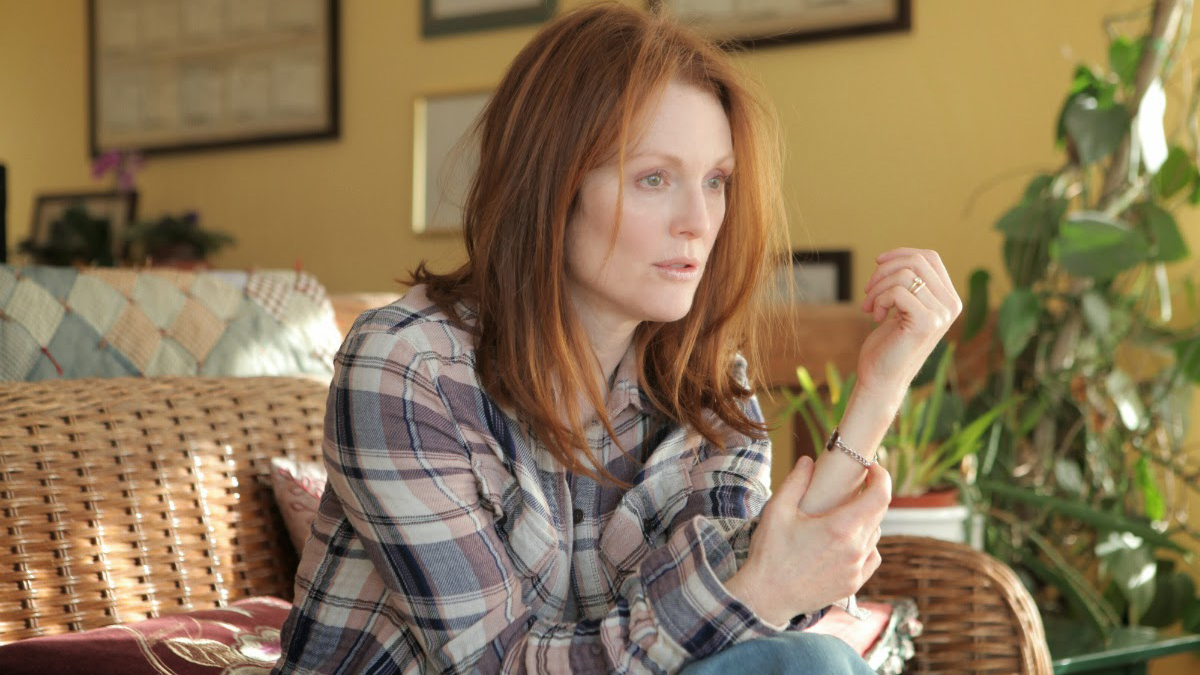 It’s said that the quality films are saved for the end of the year — the “serious,” “adult,” “issue” movies; the musicals, the statements, the Eastwoods. The studios — all of them, not just the major ones — hold their fire until as close to awards qualification as possible (that’s December 31). December is now as much a dumping ground for movies as January. But while we tend to think of January as a junkyard, December’s leavings are classier, tonier, desperately reserved for Academy voters. It’s a consignment shop into which everything, from some of this year’s best foreign-language films to the most eagerly anticipated Hollywood dramas, gets stuffed.

All the gambling and strategizing and holding on — all the so-called qualifying runs — are ruining (or, at least, perverting) committed moviegoing. The qualifying runs make sense, in a way. Some movies need this “awards push” to attract audiences. Two examples — Still Alice and Miss Julie — opened last week. Don’t be misled by those titles; they’re not bands. One’s a lousy showcase for two very good performances on one of these qualifying runs (here for a week, and back to stay on the day after next month’s Oscar nominations!). The other, from a tiny distributor, is among the best drama classes $13.50 can buy, and it probably should be released in a less absurdly jammed month.

Still Alice is one of those disease movies that let an actor go big or go crazy all the way to the podiums. But here the disease is Alzheimer’s and the actor is Julianne Moore. This isn’t an empty-yourself-out kind of affliction. Moore has to do a lot of watching and waiting. The studio’s poster has Moore swathed in flannel, sitting in a wicker chair, staring blankly ahead. It’s both a complete mischaracterization of the performance and a good summation of the mediocre shorthand at work. To be fair, how should you market a movie like this? Thank god for those awards, huh?

Moore’s character, Alice Howland, is a highly respected linguistics professor at Columbia University whose concerns about her failing memory culminate in a diagnosis of a rare, hereditary form of early-onset dementia. This is a personal apocalypse scenario for a young person (Alice is 50). She goes for runs and can’t remember how to get back to her brownstone. She loses her way in lectures that she’s been giving for years. The most suspenseful scenes involve whether she’ll remember the words she puts on a reminder board in her kitchen.

Alice’s husband, John — a biologist, played by Alec Baldwin — starts off as one of those optimistic deniers until he gets a load of his future and turns into something else. Their three children — played by Kristen Stewart, Hunter Parrish, and a tightly wound, tamped down Kate Bosworth — stand to inherit the disease, but only Stewart’s character, Lydia, takes an interest in her mother’s subtle downward transformation. Lydia’s an actress, so there’s the possibility she’s interested in Alice’s process and coping mechanisms. But that’s not the character Stewart is acting. She’s playing a listener who hasn’t felt listened to by her mother. Alice doesn’t like Lydia’s career choice — there’s too much risk and not enough money. It’s not quite respectable. The bratty, truculent response you’d anticipate from the stereotype of a character Stewart would play never happens. Instead, Stewart plays wisdom and curiosity and an almost wise love. She might never get the credit she deserves as a performer — not at this age. I think some actors know how good she is. But there’s also this perception of attitude, baggage, and cool that seems to work against her even as the same tendencies bolster the personas of guys like Ryan Gosling and Shia LaBeouf — “bad boys.” Stewart seems to be a better scene partner than they are. She’s not trying to win. She’s there to facilitate and maybe even to learn. The listening stuff here isn’t an act. That’s what she brought to Welcome to the Rileys, from a few years ago, and what she gives to Juliette Binoche in Olivier Assayas’s Clouds of Sils Maria, a very different movie about actresses that opens next year.

When you watch Stewart play Lydia, you believe you’re watching a daughter come to grips with her mother’s psychological deterioration, a deterioration that might be the least “actressy” interpretation you could hope to find. What’s irritating about that poster is that, while such a blank stare might capture what it looks like to have Alzheimer’s, it doesn’t capture how Moore plays having Alzheimer’s. There’s nothing blank about her, nothing lost. She plays Alice somewhere between struggle and resignation, a woman who drives herself to prison. You get the sense that this is a woman leveling with us — like the professor dying of cancer in Margaret Edson’s play Wit. “I wish I had cancer,” Alice says as plain as day.

If only the movie were as good as she and Stewart are. The camera keeps busying itself, as if it’s too uncomfortable to keep still. All of Alice’s academic work with language seems meant to make her getting a disease of incoherence ironic. In one of the opening scenes, she cites Darwin writing about “the babble of young children.” There are word puzzles for mobile phones and forced scatological humiliations. But there’s not much built around Alice, no dramatic infrastructure. The writer-directors Wash Westmoreland and Richard Glatzer, working from a novel by Lisa Genova, are a couple of entertainment production veterans. They married last year and have been battling Glatzer’s recent ALS diagnosis. So there’s something especially personal going on here, but what comes to the screen feels safely detached, meandering, occasionally maudlin, familiar yet harsh.

Still Alice is less a movie than furniture: a slab of moments intended to elevate, a pedestal for a performance (or two, as it turns out). Any scene between Stewart and Moore is a reason to remain seated. But there are so many passages meant to point to strife rather than bring it to life. Most of the other characters are made of air. Poor Baldwin has one of the worst parts of his life, a careerist stuck spouting bromides and scientific jargon he can’t make plausible. At some point, he’s slumped over a laptop and says defeatedly to Moore, who’s stirring a pot at the stove: “Seems like beta-endorphin just doesn’t impact the microphage activity.” Maybe the set was a hoot, because who could deliver a line like that on the first try?

What should we do with a movie like Still Alice, a movie too weak to release into the wilds of the movie-theater ecosystem without a gilded hook? You might think of Michael Haneke’s Amour, which was more of a chamber piece about an elderly upper-middle-class couple at the end of their lives. Haneke’s a director who can fill you with dread. Unexpectedly, Amour’s march to death was more of a dance. The movie had texture and surprise. But it’s the loosening of Haneke’s declarative style into a kind of poetry that shook you up. He was open to spiritual alternatives. Still Alice is over before it even gets close to that. It also makes you worry — as these disease movies do — that medical misfortune befalls only bourgeoisie. It’s far too fond of Moore to be less than flattering to her. So, instead, it cheats life, death, and us. It’s so rigged that when Alice, still functional in decline, gives a speech to a packed room, the audience rises and applauds. This movie is its own award-season triumph. Moore’s standing ovation is built in. 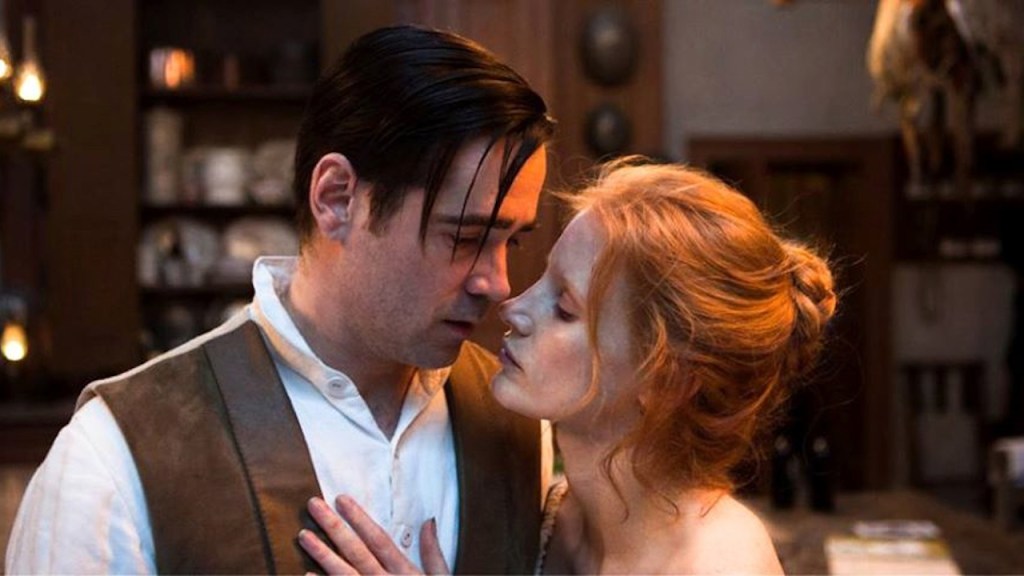 Mark Harris’s most recent awards-season column took on the stunted thinking about the Best Actress race. The nominees seem preordained without their movies having even opened wide. No one’s talking, for instance, about Liv Ullmann’s adaptation of August Strindberg’s 1888 play Miss Julie, with Jessica Chastain. Not yet. Maybe never. (See the “1888 play” part of that sentence.) The movie opened on a single screen in New York, presumably for a spell with a return in January. This is a better film than Still Alice, and not because it’s Strindberg (although, come on). Ullmann has really thought about what it means to stage a film about people running away toward each other, about loosening up and sealing off emotional valves. Doors fly open and slam shut; monologues take place in their jambs; one character asserts dominion just by standing over another.

The actors — Chastain, Colin Farrell, and Samantha Morton — swing their arms and contort their bodies, which seems right for a story about torturous psychosexual dominance. Julie is now an English baron’s daughter. While her father’s away at a Saturday ball, she stays behind and flirts with John (Farrell), her father’s Irish valet, who’s seeing Kathleen (Morton), the manor’s Scottish cook. Ullmann’s relocated the story from Sweden to somewhere in Ireland, so the class distinctions come through first in the accents. The servants’ are chowder; Julie’s is a broth. But the seduction she lays on John is thick and full of commands: “Sit down,” “Kiss my shoe,” that sort of thing. He complies, trembling with restraint when she inserts herself between his legs.

Ullmann tosses in cutaways to Kathleen, who’s down in her room. She would appear to be unscathed, except all of this jostling and inserting is going on in her kitchen, which aggravates the insult and enriches the vulgarity. This is one of those sexual tug-of-wars where the three players take turns being the top, bottom, and middle. The twin engines for each exchange are the powers of gender and class. The characters can never be equal. John wants to climb atop the pedestal that Julie wants to descend. (Here’s a movie in which a pedestal actually means something!) What Ullmann’s done is create the ideal conditions for these three to do electrifying work with each other. She maintains control so they can lose it.

The up-and-down of the dynamic among them might be unstable, but Ullmann strikes a balance within it anyway. Her years with Ingmar Bergman and decades of stagecraft are always welcome in the movies. She gets actors to work with juicy emotional clarity. At her most ferocious, her M.O. as a director of actors is “Fuck restraint.” And so, here: To hell with it. Morton stands in a door, pacing in principled rage. Farrell does things with his face that don’t seem human and yet are intensely, movingly emotional, and Chastain express-trains from lust to confusion to hysterics to delirium. Her performance culminates in one of the greatest tirades I’ve ever seen.

Maybe all three of them are too much, but they each have complete command over themselves and total understanding of the material. Whether he’s screaming or melting, Farrell is especially good with the intricacies of the language. Farrell was the Kristen Stewart of 10 or 12 years ago, and he still seems to be apologizing for being “difficult.” He’s a stronger actor now, but you worry no one will care, not even in fun junk like that Fright Night remake from 2011, and certainly not when he’s trying to wrestle scenes from Chastain and Morton, who appears to have plumped herself out for the role. That, I think, is what you’d be willing to do for Ullmann: grow in every way possible.

Who knows what the movies’ prize-givers will do with something as physical and smartly done as Miss Julie? Ullmann’s skill with actors equals someone like Alejandro G. Iñárritu’s, but she, too, is doing chamber work — worse, repertory chamber work — and she doesn’t have an easy gimmick to call attention to her ingenuity. She’s got great Category 5 acting instead. But you don’t need awards to deal with that. You need FEMA.

‘Do You Like Prince Movies?’ Podcast: ‘The Babadook,’ and This Month’s Book Club Selection