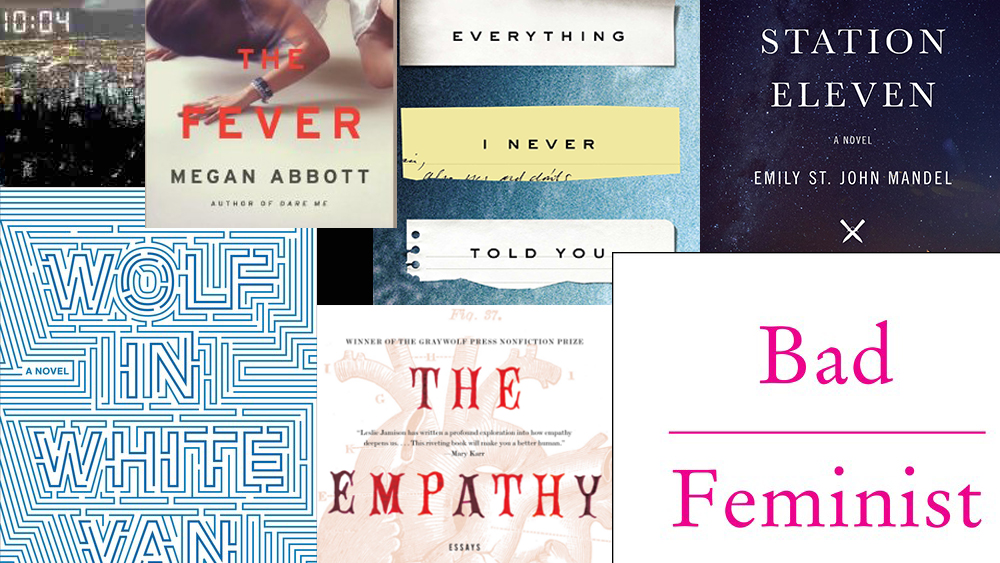 Sarah Koenig’s podcast Serial may be real-life reportage, but it opens with the most common mystery convention: a dead woman. From its earliest episodes, I couldn’t help but be reminded of Celeste Ng’s near-perfect debut, Everything I Never Told You. Ng’s book, too, opens with a body — a young girl floating in a lake. But if you take issue with the way Serial has skirted around race, you’ll be pleased with the way Ng brilliantly employs the mystery-novel construction to intensely scrutinize the way the racial tensions within Lydia’s Chinese American family are brought to light in small-town Ohio. Everything I Never Told You is an affecting book that confronts grief, gender, and genealogy while moving at the speed of a thriller.

The same similar small-community dynamics are present in Megan Abbott’s The Fever, but multiplied by a factor of 10. In the sleepy town of Dryden, an unexplainable illness is taking hold of young women at the local high school, causing a hysteria among students, teachers, and parents. The Fever is a literary mystery that is both psychological and, in a way, psychosomatic. The sickness could be real or imagined. Is it a disease or something even more sinister? Abbott is well-versed in the lives of high school girls, having penned the excellent Dare Me and The End of Everything, but The Fever is an even stronger examination of the adolescent mind and all of its influences.

All the Birds, Singing is a triumph of mood and tone and grit. It’s also arguably the year’s most underrated novel. Set on a British isle and rural Australia, Evie Wyld tells the story about a tough tomboy, Jake, whose herd of sheep is being mysteriously ravaged in the night. Wyld develops a multilayered mystery through chapters that alternate between past and present: What happened in Jake’s past that caused her to flee Australia? Will those mistakes follow her here? What’s killing all of her sheep? By the end, some of the answers are clearer than others, but the lingering sensation is a haunting one.

This was another strong year in literature’s greatest tradition: men having feelings. Take, for example, Ben Lerner’s delightfully metafictional 10:04, which featured a man very much in Lerner’s own position — an improbable writer surprised by his literary success and navigating the potential of his future. But for a novel so obsessed with the future (early on, Lerner evokes Back to the Future, even), it is very much about a specific time and place: New York City, between Hurricanes Irene and Sandy. The year between the two storms is a period in which Lerner (the character, though he’s never named) explores the meaning of time through his relationship with Alex, a platonic best friend with whom he attempts to have a child. Underneath all of 10:04’s seemingly postmodern trappings is a smart and often hilarious story, composed with the confidence of one of the finest novelists today.

One of the most surprising debuts this year came in the form of Phil Klay’s Redeployment, a series of short stories that tackled the Iraq War abroad and back home. Klay himself served in Iraq as a staff officer, giving him access to a diversity of soldiers in different positions. By opting to write stories instead of a novel, Klay is able to present many experiences, from comptrollers to officers to Iraqi police. Redeployment is male-centric (sad men, but understandably so) and does show some overeager weaknesses common in debuts (in particular, it asks too much of its dialogue at times), but its wide-reaching empathy and ability to wrestle with ambiguity makes it one of the most thoughtful works of fiction about Iraq to date.

Another great debut comes from John Darnielle, whose novel Wolf in White Van exercised sentimentality in all the right ways. A childhood accident leaves Sean Phillips disfigured for the rest of his life. He has trouble eating, speaking, and being seen in public, so he creates a play-by-mail adventure game called Trace Italian. It becomes a way for Sean to escape his isolation and loneliness (and also his way to make a living). Things are complicated when two players of Trace take its fantastical elements too seriously, and Sean is overwhelmed with guilt, whether justifiably or not. Wolf in White Van manages to explore every kind of sadness without crossing into melodrama.

But who was the saddest man of all in 2014? That honor is bestowed on Paul O’Rourke, the central character of Joshua Ferris’s divisive To Rise Again at a Decent Hour. Paul is a curmudgeonly dentist who finds himself confused and bewildered when he discovers someone has set up a fake website for his practice. Like the novel itself, Ferris is often in the love-him-or-hate-him camp as an author, but put me in the former group. The novel is imperfect (the twist in the middle throws the narrative off-kilter a bit), but I think Ferris demands patience from his readers and rewards them with complex, stirring fictions. To Rise Again in particular asks a lot, but by the end, you’ll find a carefully written novel that impressively spans ideas about technology, misogyny, and dentistry.

It’s common wisdom in publishing that essay collections never sell well. And so everything about the success of Leslie Jamison’s The Empathy Exams seemed unlikely. It was experimental in form, each essay a hybrid of criticism, research, and personal narrative; as a collection, it chose to focus not on a topic but a feeling (Jamison leaps from medical examinations to the Paradise Lost films to her own mugging). But while critics rewarded the risks Jamison took, The Empathy Exams became a commercial success against all odds — and deservedly so.

If Jamison’s success was improbable, Roxane Gay’s has felt inevitable. Gay has emerged as one of the strongest and most interesting cultural critics of the past two years, and Bad Feminist — which collects much of her work during that ascent — is as bold as the sum of its parts. The effect of collecting Gay’s work into a single book casts her writing in a new light. Maybe as individual pieces, Gay’s essays would seem disparate, but as Bad Feminist, they suddenly reveal a more consistent theme in her work: a struggle to make sense of a world that continually abuses and mistreats women and people of color. But she examines inequality with the right tools when appropriate: sometimes anger, sometimes wit, but always with humility and humanity.

On the more understated side, Sidewalks, a recently translated book by Mexican author Valeria Luiselli, is slimmer and lesser-known than Jamison or Gay’s work. But in its brevity — both structurally and thematically — Sidewalks is the tightest essay collection of the year. Luiselli has grand meditations about one’s relationship to her city, its connection to language, and the narratives that literature imposes on one’s life. But she packs these ideas into 12 cohesive essays that inspire rumination and delight.

Earlier this year, a friend explained that he was tired of the postapocalyptic setting. After Cormac McCarthy’s The Road, what was left to say about life after the end of the world? I might’ve agreed if this year didn’t see the release of two accomplished novels that took those genre traits and reinvented them.

Edan Lepucki’s California elevated the postapocalypse by putting its characters at the center. It is, really, the portrait of a marriage that just so happens to be after the modern world has collapsed. From its opening pages, we’re to understand that Cal and Frida love each other — this is the novel’s given — but Lepucki questions whether that bond can be strong enough to withstand the perils of an Earth that has slowly decayed into one absent of organization and community. Lepucki evokes all the great themes of the tradition: Can one survive and maintain their humanity? Is there anything more dangerous than mistrust?

Station Eleven asks an even bigger question: What is the role of art? Emily St. John Mandel imagines an Earth that has succumbed to an epidemic called the Georgia Flu. Fifteen years after almost all of humanity has been wiped out, a traveling caravan of Shakespearean performers attempt to find meaning in survival through their craft. Station Eleven is elegantly constructed, moving in and out of plot lines pre- and post-epidemic life with narrative grace. The major obsessions of the book — King Lear and a homemade sci-fi comic book — confront the meaning of art, craftily suggesting a convergence of what we think of highbrow and lowbrow. Given Station Eleven’s literary ambitions within well-worn genre territory, it’s a damn clever argument to make.

Kevin Nguyen (@knguyen) is the editorial director of Oyster and the editor of The Oyster Review.

Filed Under: Books, Everything I Never Told You, The Fever, All the Birds, Singing, 10:04, Redeployment, wolf in white van, John Darnielle, To Rise Again at a Decent Hour, The Empathy Exams, Bad Feminist, Roxanne Gay, Sidewalks, california, Station Eleven

‘Halo: The Master Chief Collection’ Is Almost Brought Down by Its Ambition