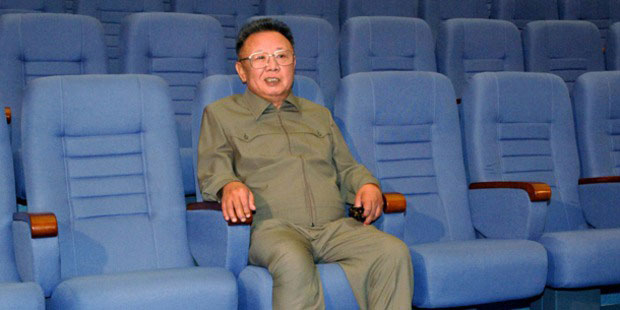 Kim Jong Il, the North Korean film producer and cinema scholar known for his tireless championing of thoughtful, character-driven storytelling, his passionate involvement in nuclear-weapons causes, and his flamboyant Six Million Dollar Man-doll wardrobe, died over the weekend at the age of 69, according to his publicist. Il, whose hard-nosed negotiating style earned him the nickname “The Generalissimo,” cut a larger-than-life figure in international-cinema circles for nearly forty years — a controversial auteur/producer/rogue, part Robert Evans and part Cobra Commander, he became sort of a cult figure among North Korean moviegoers despite mostly working behind the scenes.

Although Il wasn’t a writer or director himself, he was said (by an exhibit at a museum in Pyongyang devoted to his contributions to the world of movies) to have issued over 11,890 very specific instructions to Korean filmmakers since the 1960s, on subjects ranging from ideology to camera placement to the importance of reading the script. He owned 20,000 videotapes and confounded dogmatists with his frequent praise for the Rambo franchise. The full text of one of his many acclaimed books, On the Cinema and Directing is available as a .PDF here. It’s at once an essay about the neo-neorealist aesthetic Il believed was the highest mode of filmmaking, an exploration of the role of the auteur in the
collectivist context of the film-production process, and a treasure-trove of cigar-chomping cognac-swilling picture-business wisdom, written in an urgent, aphoristic style pitched somewhere between David Mamet’s Bambi vs. Godzilla and Hell’s Angels producer Howard Hughes’ The Proper Way to Wash a Food Tin. Rumor has it Brett Ratner kept a copy of it on his bedside during the making of Tower Heist.

Il pulls no punches when detailing the cutthroat realities of the biz — “In capitalist society the director is shackled by the reactionary governmental policy of commercializing the cinema and by the capitalists’ money, so that he is a mere worker who obeys the will of the film-making industrialists whether he likes it or not,” he writes. But he’s also a born raconteur, spinning the kind of yarns you can only pick up from a lifetime of surprise-inspecting movie sets and being photographed nodding approvingly while wearing Kool Moe Dee sunglasses.

“There was once a debate,” Il remembers at one point, “on the problem of filming the story of a general of ancient times who had repulsed foreign invaders. A director said that he would give a wonderful representation if he was just given 500 horses. Some people claimed that the director’s imagination was rich and bold and they even envied him. Is this really rich and bold artistic imagination? What would happen if one started making films, excited by the idea of visualizing a spectacular panorama in which 500 horses charge like a hurricane over a wide expanse of fields and thunderous cheers are heard over a forest of glittering spears? A director who does not see the essential content of life but considers only the scale of the work to be important cannot achieve success in film-making.”

Um, are you listening, James Cameron? Or are your ears blinded by a forest of glittering spears? #ohsnap

Kim Jong Il’s birth was heralded by a swallow, and took place in a cabin at a secret base on top of Mt. Paekdu, the most sacred mountain in Korea; miracles followed, including the appearance of a new star in the firmament, a double rainbow, and a talking iceberg. And he never stopped making magic happen. His greatest film — and the only one you can watch right now in ten-minute chunks on YouTube — is 1985’s Pulgasari. Il was a fan of the Godzilla movies of the ‘60s and ‘70s, and in some ways Pulgasari — named for the monster, a sort of chew-toy Sleestack/King Koopa amalgam designed by special-effects man Teruyoshi Nakano, a veteran of the original Toho Studios Godzilla films — is an homage to those movies, and a sweeping-yet-idiosyncratic postmodern love letter to the Japanese kaiju genre in general. (Monster-pedants will note that Pulgasari himself, with his lumbering big-shouldered bearing, more closely resembles frequent Godzilla costar Gamera, the flying turtle.) But the movie is also a parable about power and the role of the hero in society, the way a jumpsuit is a shirt but is also pants.

The monster’s introduction evokes the tales of the Golem in Jewish folklore, in which an oppressed people’s yearning for a champion gives birth to a supernatural killing machine. The evil king throws an old blacksmith in jail for redistributing cookware and farm implements that have been requisitioned for scrap metal; as the blacksmith slowly starves to death, he shapes some rice and clay from the floor of his cell into a li’l Pulgasari statue. “In my life, there was not a day that passed in which I did not create something,” he says. “Before I leave this world, let me at least leave this.” He dies, but the statue passes to his daughter, who pricks her finger and drips blood on it, causing it to come to life. At first it’s action-figure-size and almost Mogwai-cute — one imagines Il dreaming of the toy residuals — but it soon begins feeding on metal and grows into a man-size monster with the eerily flat affect of a young Triumph the Insult Comic Dog, or Ryan Reynolds.

The visitors fear him at first, which leads to some King Kong/Frankenstein-style misunderstood-monster business, but eventually they realize he’s their only hope against the evil king. Laughing, the villagers feed him all the metal at their disposal, causing him to grow to incredible size; eventually he destroys the evil king’s castle and then his head explodes. It’s a powerful statement about the importance of respecting monsters who have your best interests at heart, and deserves a place on the shelf with the greatest movies ever made by directors who’ve been kidnapped and forced to direct films against their will, right next to Chipwrecked.

It was a passion project for Il; although he entrusted the director’s bullhorn to Shin Sang-ok (an acclaimed South Korean filmmaker he’d lured to Hong Kong and kidnapped in 1978 and kept as a prisoner in a pit for five years), in some odd way it feels distinctly autobiographical. Early in the film, the leader of a village menaced by an evil king laments his plight, sounding not unlike a film producer bemoaning his thankless job: “Between the bad harvest and the governor, everyone is about to die of starvation. I can’t just ignore that! And everyone chose me as the leader.” The people, right? Always complaining about dying of starvation! But the film also taps into universally relatable emotions, like sadness, and being afraid of a monster that eats swords. It’s about life — and as the Generalissimo observed in On The Cinema, it’s almost impossible to make a realistic movie without depicting life:

“The main element which rouses people’s emotions is life itself. Human emotions emerge from life, find expression in life and affect life. Various feelings such as joy and sorrow which every man experiences, are caused by the relationship between him and his situation. Human emotions cannot exist outside reality.”

Previously by Alex Pappademas:
Meme of the Week: #RIPRonPaul
When Zombies Attack!
What the Joker Was Doing Naked
The Frustrating Unlikeability of Treme

What Howard Stern is Doing on America's Got Talent