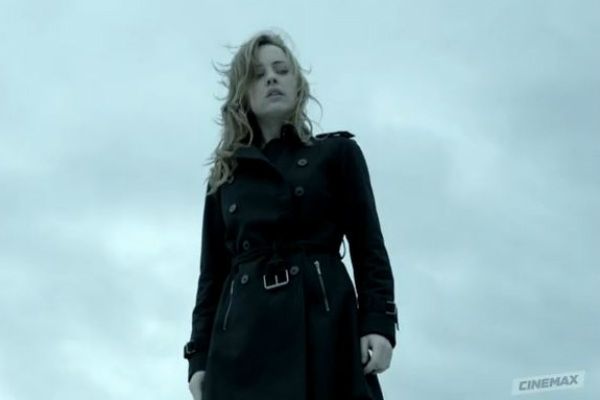 Habitués of Cinemax’s Friday-night programming are no strangers to gauzy Eurozone settings, wooden actors of unknown Slavic provenance, and loving, lingering shots of blondes submerged in bathtubs. So the network is definitely onto something with Hunted, its second original scripted series (after the charmingly steroidal Strike Back), debuting tonight at 10 p.m. EST. Those hoping to fast-forward to the naughty bits will be sorely disappointed, however. Other than a perfunctory vertical coupling in the opening seconds, the only banging on display in the pilot involves the skulls of tight-T-shirted goons colliding with the unforgiving fists of Melissa George.

George, game and gamine, is Samantha Hunter — “Sam” to the fours of people who know her true identity as a private spy in the employ of a shady, London-based organization called Byzantium. It’s one of this humorless show’s few sparks of wit that such a viciously amoral capitalist concern is set squarely in the heart of the so-called European “nanny state.” But maybe it’s just good business, as Sam could certainly use the health care: In the opening moments of the pilot alone she’s punched, kicked, tackled, fake shot, and real shot, losing a secret pregnancy in the process. The reasons for all the double- and triple-crossing remain frustratingly vague, though, as does Sam’s eventual return from the cold. After a lost, grudge-tending year spent holding her breath underwater in the aforementioned tub and jogging impassively through the Scottish highlands — Hunted takes wonderful advantage of its old-world locations — she turns back up at the office as if she’d merely popped out for a packet of crisps. The eight-episode first season balances Sam’s professional prying with her continuing attempts to discover just which of her creepy colleagues — played by a dreary assortment of bland Brits and, oddly, Mr. Eko — stabbed her in the back by putting a bullet in her belly.

The best thing about the show by far is George herself, an Aussie who proved she had the national knack for accents as an American on Alias and In Treatment. Here, she flits effortlessly between London-posh and Indiana-flat with temporary detours into passable French, Arabic, and Spanish. With such abilities at her disposal, it’d be nice to see Sam have a little fun now and again. But Hunted is a grim and punchy little show with no time for spy games. Instead, Sam is saddled with nearly the same mysteriously violent incident in her past that befell Kristen Kreuk on The CW’s dreadful new Beauty & the Beast (think parked cars and doomed moms); our Jane Bond was burdened with heavy baggage long before she packed her things for Scotland.

During the well-choreographed, wildly complicated action set pieces — it turns out Byzantium is aptly named — Hunted achieves a sort of brutally balletic grace; all sad-eyed people doing terrible things to each other for money instead of love. There are also a handful of Cinemaximal indulgences — necks are snapped, eyeballs are stabbed, and men are set on fire before being shot. But too often Hunted is weighed down by its tone, heavier than the rain clouds in Glasgow and burdened by stilted dialogue leaden with references to chaos and variables. Other than George, the only reprieve comes in the implacable visage of Stephen Dillane (Stannis Baratheon on Game of Thrones), whose affectless demeanor imbues Keel, Byzantium’s boss, with a bracingly icy intensity.

Creator Frank Spotnitz, partnered here with the people responsible for the British undercover show Mi-5 (Hunted is a co-production with the normally staid BBC), proved on The X-Files that he was capable of ginning up a good conspiracy, although less so at bringing it to a close. And Sam’s first assignment — infiltrating the tony manor of a Tory millionaire by charming his grief-addled son and lonely 10-year-old grandson — seems awfully small-bore for such a high-flying heroine. Even so, there’s something worth watching about George; her sad, saucer eyes do more to make Sam compelling than the script’s fetishistic lingering on her Spartan, Spam-and-revenge-fueled existence. And there’s some rough pleasure to be had in Hunted’s hard vision of the U.K., one that’s worlds removed from the soft-core delights usually peddled by the network.

As for those turned off by the show’s lugubrious pace and George’s general non-nudity, fear not! A more escapist version of Europe awaits at 1 a.m., when Emmanuelle Through Time: Emmanuelle’s Forbidden Pleasures begins.