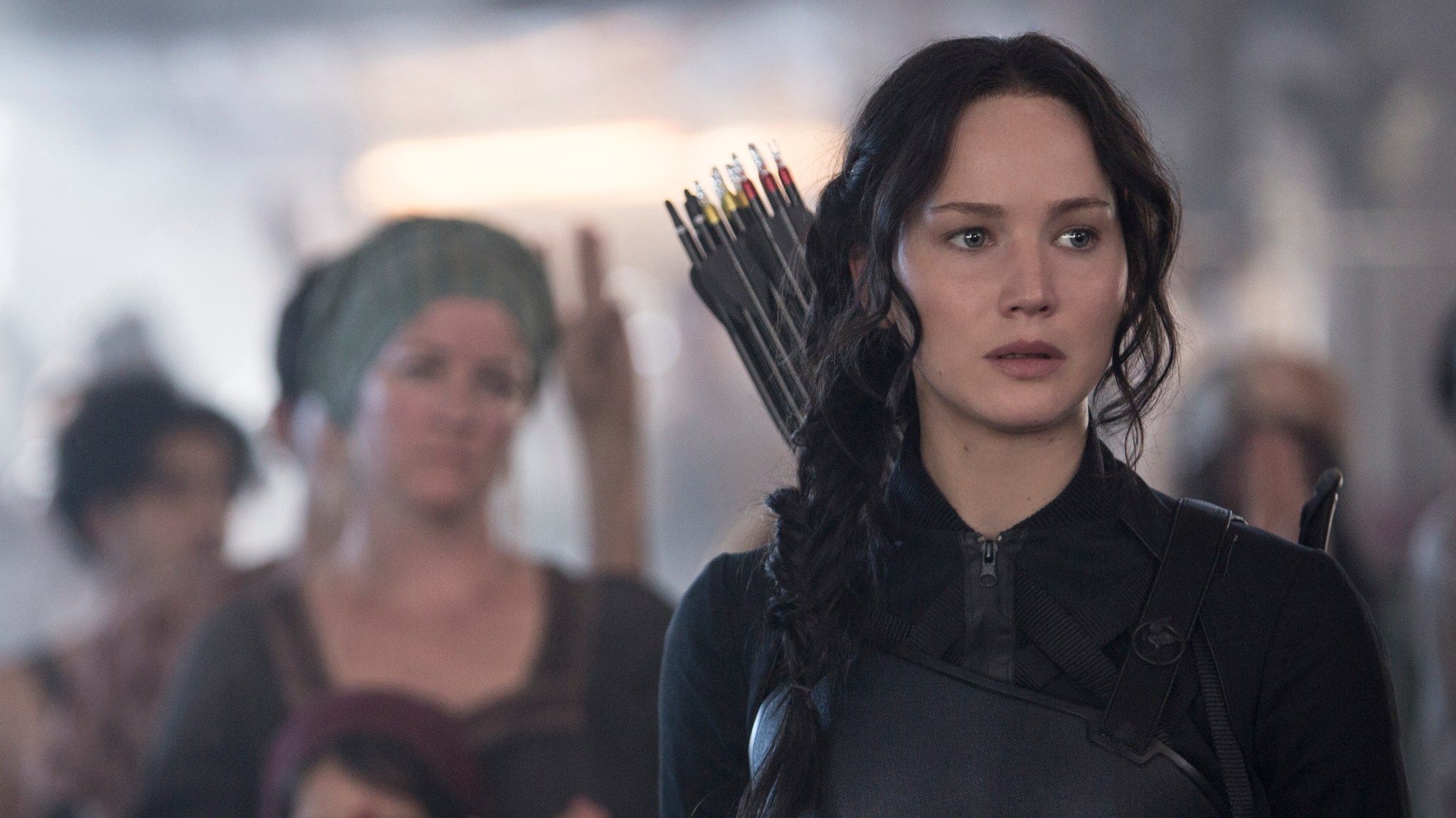 There are cliffhangers, and then there’s what happens with the third and next-to-last Hunger Games installment, Mockingjay — Part 1. We don’t even get to the cliff. Just as the revolution against the Capitol is about to get good, here come the closing credits with a brand-new dirge from the movie’s soundtrack curator, Lorde.

Yes, the reward for watching Katniss Everdeen (Jennifer Lawrence) tour one bombed-out district after the next, for seeing her weep and mewl for piles of the dead and for her poor pretend paramour Peeta (Josh Hutcherson), is having to wait to see what it builds to. So much skill and craftsmanship and good writing and acting and costuming and production design go into this movie that it feels churlish to respond with resentment. But it’s possible — perhaps even necessary — to enjoy the movie and despise how abruptly it ends. The previous installment concluded with Katniss’s discovery that a handful of other characters were actually revolutionaries from District 13 and that the Capitol had captured Peeta. That was a cliffhanger.

Suzanne Collins wrote three books. Lionsgate is making four movies. The fourth will feature the oppressed storming the property of the oppressor, President Snow (Donald Sutherland). Or one can only presume that will be the case. Who’s to stop the studio from subdividing Mockingjay until it becomes a kind of Zeno’s paradox, a math problem that never gets you to the Capitol? Things could be worse, I suppose. These movies could be divided by the chapter. By the page! They could be … The Hobbit.

Luckily, they’re not. The Hunger Games has turned out to be the best of these so-called long-term franchises. The first movie was an incoherent dud, but the second, Catching Fire, really did catch fire. This third movie is cooler, but equally tense. You feel as if something’s at stake in this world.

Collins’s postapocalyptic dystopia, called Panem, represents different American regions — Katniss and her family and friends are from a kind of coal-mining Appalachia — that were carved up and are now run by Snow’s totalitarian regime. In the backstory, these 13 districts united and failed to overthrow the central government, which, in punitive retaliation, instituted the Hunger Games, a televised reality-competition show in which two adolescents from each district fight to be the last person standing. In the first two movies, Katniss merged on-the-ground cunning and media savvy to keep herself and her fellow District 12 entrant, Peeta, alive. The broadcast masterminds tried to use the two competitors’ affection for each other against them while also riveting the Panemanians at home. In this third movie, the aboveground districts — what remains of them — have risen up, gone on strike, and are ready to attack.

Revolution is a malleable concept, especially in fiction. Novelists and filmmakers can be as abstract or as pointed as they like. The Hunger Games films’ iconography evokes slavery and Nazism, but also a fractious era of dictatorship, grotesque income inequality, and an ambiguous, seemingly unwinnable war. Almost any people with a boot on their neck and rifles strapped to their backs are represented among the citizens of Panem.

President Snow tries to appeal to a socialist ideal: “To refuse to work is to put the entire system in peril.” No one’s having it. But the people require a leader. District 13’s, President Alma Coin (Julianne Moore), has been too cerebral to galvanize anyone. She accepts this and leans on Katniss to forget Peeta and assume the symbol of Panem’s struggle — the mockingjay.

These films appropriate the imagery and terminology of uprising and oppression, but they go for a treatment that’s not merely allegorical. In Mockingjay, Katniss and her crew try but fail to stop the Capitol from destroying a packed hospital in a war-torn District 8. Feel free to confuse this movie’s District 13 with that other District 13, the brutalist one from that set of French action films (2004’s District B13 and a 2009 sequel, both Luc Besson productions), in which public-housing residents strike back against a government that wanted to bomb it to oblivion. In Mockingjay, 13 is a literal underground movement so deep below the earth’s surface that shots of the vertical tunnels look as if they run laterally.

The opposition’s propaganda videos (propos, they’re called) infiltrate the Capitol TV broadcasts, which here consist mostly of the campy emcee Caesar Flickerman (Stanley Tucci) turning a brainwashed Peeta into a lovelorn, antirevolutionary peacenik. Wardrobe in these movies is a thing. Lenny Kravitz spends the first two movies as the show’s clothier. Every time Peeta shows up in these junket interviews, his short hair is blonder, and he’s wearing a little more makeup and a more outrageous outfit. One getup has origami jutting into his chin. “Look at what they’ve done to him!” Katniss cries. I know, girl. It’s Panem at the Disco! Soon the lumbersexuals in District 7 are leaping up and into the treetops and commencing assault on the Capitol troops. Yes, the relationship between freedom fighting and fashion seems dumb or glib. But these movies make it work, in the Tim Gunn sense. Effie Trinket, Katniss’s flamboyant, bewigged Capitol-born Hunger Games escort, is played by Elizabeth Banks with a bitchy, snobbish 1940s piquancy. Caught up in the District 13 uprising and cut off from her Capitol spoils, she sulks in her drab shift dress and head scarf. The character’s appearance evokes the ravages of both the concentration camp and the cancer ward as vividly as anything else in the movie. The presumed-to-be-villainous gamesmith, Plutarch Heavensbee (Philip Seymour Hoffman, to whom the movie’s dedicated), appeals to Trinket to help get Katniss aboard the leadership train. “Everything old can be made new,” Effie says with a mix of pain and belief. “Like democracy.” It’s a touchingly wishful thought from someone dressed like one of the Beale women from Grey Gardens.

Most of these science-fiction adventures involve someone “chosen,” a golden child — a boy, it’s always a boy — who was born to lead the masses to freedom. Some of the thrill of The Hunger Games movies is that you’re watching a woman become a leader, by dint of survival. Over and over, Katniss volunteers herself, and the people, in turn, fall for her. Lawrence didn’t give off much in the first film. She got stronger as the second went along. Here she actually gets to build a full performance that incorporates steeliness and anguish and humor. As Katniss is forced to bear witness to one atrocity after the next, Lawrence’s face is kept raw, registering new horror for each image.

A film crew follows her to each new obliterated district and captures her outrage and grief with the intent to propagandize it, to rouse the people to action. (Natalie Dormer plays the propos director, which gives Mockingjay its own Laura Poitras.) I can’t think of another set of Hollywood movies as predicated on the emotional state of their protagonist. Tears, rage, and compassion here are proof of strength. (There’s a thick irony in having a world-class emoter like Moore play a commander who’s too stoic to follow.) Freaking out here is a virtue that people are encouraged to trust.

It’s ridiculous to have to wait a year to reap the violent result of all that emotion. By virtue of its being the first of two parts, Mockingjay can’t take off, and in order to lend the film the hope of duration, it risks redundancy. If Katniss and the propos crew visit two demolished districts, they visit 30. How can you like something that feels snatched away from you? This is a movie whose climax requires Finnick Odair (Sam Claflin) to stall for time by talking into a camera for what feels like hours. Mockingjay has more exposition than a TED Talk, more rubble than a decade of The Flintstones, and absolutely no nonmonetary reason to be Part 1 of anything. It isn’t storytelling. It’s a filibuster.

Lightning Round: A Cappella ‘Cups’ Floweth Over in the First ‘Pitch Perfect 2’ Trailer