Who’s That (Long-Haired Singer-Songwriter) Guy (From This Week’s ‘SNL’)? Hozier! 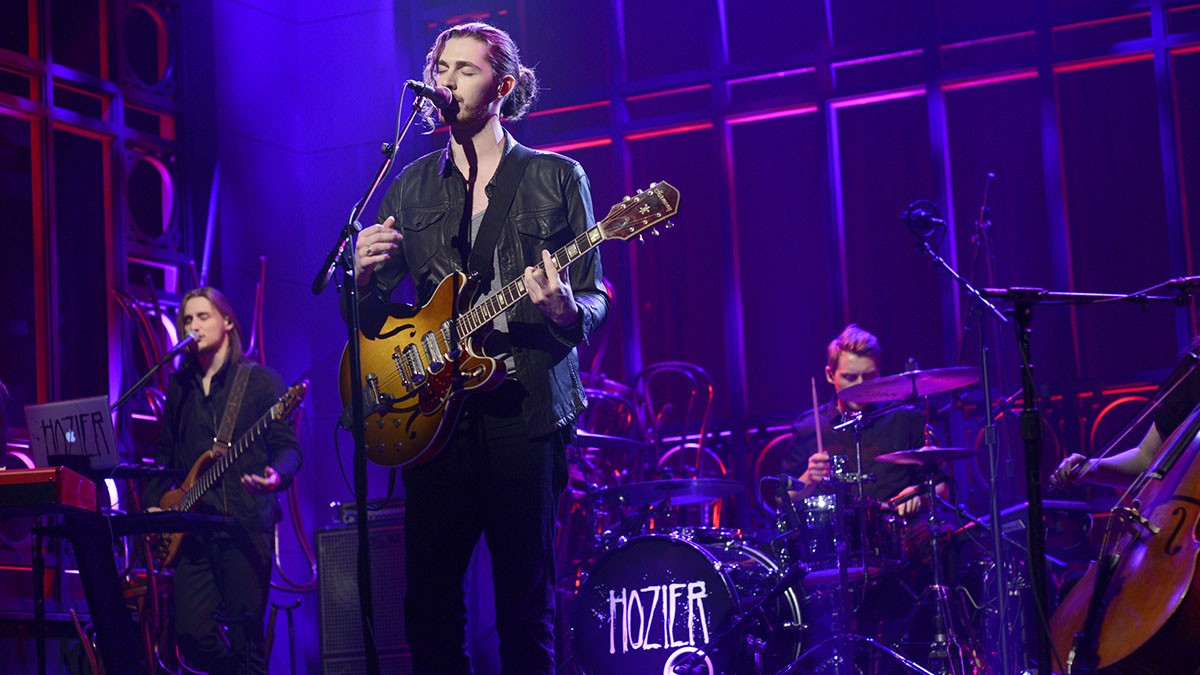 Twenty-four-year-old Irish singer-songwriter Andrew Hozier-Byrne — known simply as Hozier — is having a moment. On October 7, he released his self-titled debut LP, which is projected to enter the Billboard Top 10 this week. (It already went platinum in his home country.) The album has been bolstered by the gospel-tinged anthem “Take Me to Church,” which has notched more than 13.5 million views on YouTube. Two days ago, Hozier had his greatest mainstream exposure yet on Saturday Night Live, an oft-unforgiving showcase for young, largely unknown musical guests — though judging by comments on Twitter, he appears to have survived the snarking gallery with his career intact.

With his commanding tenor, delicately handsome features, and lustrous locks, Hozier certainly has the physical attributes of a pop star. But his music is equally striking: “Take Me to Church,” in particular, is one of the year’s singular pop hits, with a stirring piano-based arrangement spotlighting Hozier’s soaring voice. The rest of the album solidly mines similar territory, recalling the vocalist-driven Euro-soul of Adele and Sam Smith while also cutting its own path with amiably upbeat love songs and quietly bluesy ballads. It’s the sort of music that seems almost expressly designed to appeal to the only demographics still interested in buying music.

When I reached Hozier by phone last week, he was recuperating from a recent throat infection in his Manhattan hotel room. The illness forced Hozier to cancel several dates on his Stateside tour, including an appearance at the Austin City Limits Music Festival. Naturally, he was “equal parts nervous and excited” about his impending SNL gig, as well as about his newfound fame.

For American musicians, it’s a big deal to be on Saturday Night Live. How aware were you of the show growing up in Ireland?

Yeah, I was about 2 or 3 when my dad introduced me, to my mom’s disapproval. But it quickly became one of those films you watch as a child on repeat. You put the tape in and rewind it like a Disney film.

Were you drawn more to the comedy or the music?

A lot of the comedy would go over a very young child’s head. There’s a scene where he gets out of prison and he’s given back a stolen prophylactic. As a 3-year-old, that’s completely miles over your head. So I think it was more the music. And the car chases. That was a huge draw.

Obviously, American music is a big influence on the music you make. Now that you’ve visited the U.S. and toured the country a bit, how does the reality of America compare with your preconceptions?

I’m still figuring that out. I think all that we would know of America back home is foreign policy, and maybe the snippets of the madness of political culture. What did shock me is the sincerity of the people — the politeness and overall enthusiasm and optimism of the people. The U.K. and Ireland are very different. There’s a healthy cynicism that you don’t find in everybody here in America. They’re a little bit more energized and optimistic about things.

American listeners are just now getting to know you, but you’re already a budding superstar in your home country. How are you dealing with the early stages of celebrity?

It’s flattering, but you don’t feel any different. You just feel like you’re doing a job that you want to be doing, and then one day somebody asks you a question like that: What’s it like to be famous? It doesn’t really mean anything. The only difference is some people stop you and ask you for photographs.

Thankfully, I haven’t had too much of a chance to think about it. I haven’t been in Ireland for a meaningful period of time for months and months and months. The last few times I’ve been dropping in for less than a day for a gig, and then flying out. Truth be told, I’m not all that comfortable with celebrity culture. That was always something that baffled me, the obsession over fame. I don’t think that’s a reason why anyone should get into making music.

You come from a blues background, but you’ve already been put in this pop context. I imagine that must be strange.

It is a highly surreal experience being mentioned by pop stars, or having your name come up in an interview by a pop star. Taylor Swift came to the show in Nashville.

Taylor Swift has talked about you on Twitter as well. Did you meet her at the show?

I did! We talked. She’s a very intelligent, very funny person. She’s an articulate feminist as well.

You’re the latest in a long line of white Irish musicians, going back to Van Morrison and Rory Gallagher, that’s been influenced by American R&B and blues. Why has that musical connection remained so strong for the Irish over the years?

Bob Geldof has talked about how Van Morrison is Celtic blues, and there is a rich tradition in Celtic culture and Irish culture of songs of bondage and songs of sorrow. Ireland has a very troubled history of famine and poverty and land being stolen. That’s all been expressed in music and poetry through the years. It’s certainly a very cathartic feeling for disenfranchised people.

You started playing publicly as a teenager in the mid-’00s by performing songs by Robert Johnson and Howlin’ Wolf. Did that make sense to audiences at the time, seeing this skinny white kid play stuff like “Hellhound on My Trail”?

I was 15 or 16. I started learning open tunings, so some of the first guitar I was good at was slide guitar, because it’s quite intuitive in a way. I used to do it at talent shows and stuff like that, and I suppose in a way it was something that was very much my own, and when you’re a teenager, it’s nice to have something that is very much your own thing. People didn’t know where I was coming from with that, and it certainly wasn’t anything my peers were into.

What was it about blues that spoke to you?

I listened to it when I was a child. It was very close to my heart, and it felt like home to me. I still get that same feeling when I listen to blues. I realized as a teenager, this is something I wanted to be able to express. I’m still not a lead guitarist — I was very drawn to Delta blues music, which is one mouth and one guitar, essentially. And that’s where it first started.

Were you influenced at all by contemporary bands like the White Stripes or the Black Keys?

Rubber Factory was a huge album for me. I listened to that album and got lost. The White Stripes, it took me longer to get into. The older hits were anthems of those years, and with Jack White — I don’t know, it just took me longer. I spent a lot of my time with my head buried in early 20th-century music at that time, anyway.

In interviews, you’ve alluded to feeling some distance from the poppier, more upbeat songs on the new album. Do you want your next record to be darker?

I don’t want it to be darker. I like playing with light and shade. I like saying awful things in very pretty ways.