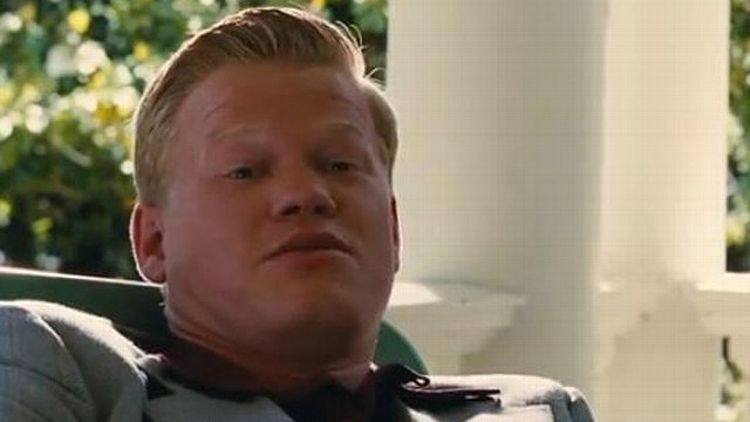 Here is actor Jesse Plemons, talking to Zap2It in 2007 about the first time he suited up to shoot a football scene on Friday Night Lights: “There’s this play where Taylor is supposed to knock the crap out of me. So he does, and I get up and I’m jumping around — and everyone’s like, “Holy crap!” My chin had split open [laughs], I had to get like 11 stitches.”

If you’re reading this website, these people probably need no introduction, but just in case: On Friday Night Lights, Plemons played Landry Clarke, whose non-gridiron activities included wearing women down with persistence, fronting the best-ever Christian death-metal band in Dillon, Texas, and the occasional act of justifiable manslaughter. In the first season, Landry was an appealing comic foil to Zach Gilford’s long-suffering Matt Saracen; when he joined Saracen on Dillon High’s football team in Season 2, it was implausible but forgivable, provided you liked Landry and wanted him in the mix as much as possible, which people generally did.

And “Taylor” in the above quote is Plemons’s co-star Taylor Kitsch, who played Tim Riggins, FNL‘s resident incarnation of the James Dean/Dylan McKay wounded-yet-savable-wolf archetype, forever drowning his thwarted small-town hopes in Lone Star and easy sex, his bedroom-area-of-the-Airstream eyes perpetually smoldering behind sweaty hair. Tim Riggins inspired the Dirty Projectors to toy with naming their last album Tim Riggins, à la Bob Dylan’s John Wesley Harding; Landry inspired a goofy Tumblr where people Photoshop-meld his features with those of Little Orphan Annie. Kitsch looks like someone who gets laid more often than James Bond; Plemons looks like someone who’s spent a lot of time explaining to people in bars that no, he didn’t play O-Face Guy in Office Space. Kitsch looked enough like a movie star that while FNL was still on the air, he turned up as the Cajun mutant master thief Gambit in X-Men Origins: Wolverine, a small part that was effectively a screen test for potential superhero-franchise roles down the road; Plemons had a few lines in Observe and Report and Paul. Accordingly, when FNL finally hit the showers in 2011, it was Kitsch who graduated the fastest to lead roles in not one but two ginormous action movies (plus the most seemingly commercial Oliver Stone film in about a decade). And then, because sometimes things like this happen in the greatest country on earth, 2012 became Jesse Plemons’s year instead.

No shots, of course — Kitsch did what he could to provide the live-action Yes album cover that was March’s John Carter with an emotional through-line, and he seethed appealingly in Stone’s Savages, a weirdly listless adaptation of Don Winslow’s ruthlessly cinematic novel. And while I may be the only person who feels this way, I actually had more fun at Battleship than I did at Avengers. (Peter Berg doing Michael Bay >>> Joss Whedon doing Peter Berg, I guess.) The poor critical and/or commercial performance of these films (Carter was cited as “primarily” responsible for an $84 million loss in a Disney quarterly report in May) will probably end up being a referendum on Kitsch’s viability as a leading man in what I will apologize in advance for calling the post—Channing Tatum era, which is a shame, because the fact that nobody liked them wasn’t Kitsch’s fault; it’s not like it was his idea to let Blake Lively narrate a gritty crime drama.

Plemons was in Battleship, too, in a supporting role that let him hang out and trade Landry-like zingers with Rihanna; he’s equally solid in one of the year’s most critically acclaimed films, Paul Thomas Anderson’s The Master, which debuted last week in New York and Los Angeles. As Val, the son of Philip Seymour Hoffman’s cult-leader character Lancaster Dodd (and one of the many people Joaquin Phoenix beats up to show his devotion to Dodd’s mission), he’s not in the movie enough to steal it. And with Phoenix and Hoffman juggling fire in every scene, he couldn’t have, anyway. But he nails the toughest trick a former beloved-TV-series regular can attempt, revealing un-Landryish depths without seeming like Landry straining to make us forget Landry. (I can’t say too much more without risking spoilage, but Plemons has a costume change near the end of the film that seems to throw everything we know about Val into question; what exactly this character’s deal was supposed to be is one of the many intriguing questions Anderson throws out for you to debate on the car ride home.)

But the real dawn of the Jesse Plemons Era happened in August, when he turned up on Breaking Bad as Todd, the eager-beaver meth-biz intern whose capacity for brutality spurs Jesse Pinkman’s eventual break with his mentor Walter White. On paper, Todd’s a utility character; you know before he says a word that he’ll matter, because he’s played by someone you recognize, but he’s basically there to catalyze Jesse’s guilt about the terrible things he’s done on Walt’s behalf, and later to solve some vexing personnel issues for the Heisenberg gang by introducing Walt to his neo-Nazi hit man uncle. But Plemons rendered the character memorable and unnerving by playing him as a good-natured, corn-fed goof who just wants to learn a trade — by playing him as Landry, basically — right up until the moment he cold-bloodedly caps the kid on the bike at the end of the train-robbery episode. A show less determined to mess with us would have cast somebody more obviously dangerous-seeming — some Waingro-level Psycho Who’s Going to Ruin Everything; as it stands, even if Plemons had never been Landry, we’d remember him, the way we won’t forget Tio Hector or Gale or the Cousins. Maybe this is just the beginning of something and maybe it isn’t; either way, by revealing the capacity for evil behind his aw-shucks grin, he’s officially become the first Dillon Panther to prove he didn’t peak in TV high school. As writer Steve Kandell wrote, on Twitter: “The next Crucifictorious album is going to be so dark.”