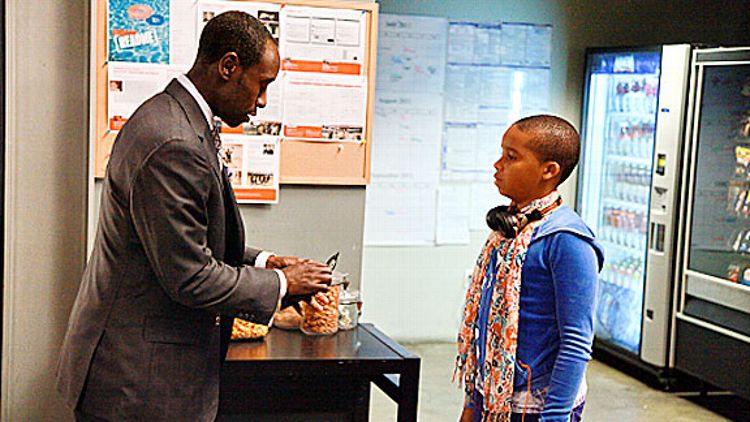 Early in Showtime’s smarmy House of Lies, Don Cheadle (starring as a smooth-talking management consultant whose last name is actually “Kaan”) turns to the camera — he does this a lot and it’s never not annoying — to explain some jargon. “A data dump: that’s the actual information. The numbers. The dirt. Everything else is horseshit. Except perception. Which is horseshit you can leverage.” The latter is a lesson show creator Matthew Carnahan seems to have taken to heart: There are few shows in the known universe that try this hard to be perceived as shocking and unlikable. From its opening benediction of universal advice (“never, ever fuck your ex-wife”) to the casual screwing of strippers and the economically downtrodden, every overwrought minute of the Lies pilot seemed desperate to offend somebody. The jokes were culled from the Californication school of humor, where setups are replaced with bare breasts and punchlines are scrapped in favor of Penthouse Forum buzzwords. (“I was squirting, Greg!” must be a killer side to rehearse in your agent’s run-down Van Nuys office.) Even the b-plots were nothing but cynical premium-cable bait: Despite all head-butting, binge-drinking evidence to the contrary, Marty’s not a bad guy, he’s just got mommy issues. Oh, and his son is a cross-dresser because, you know, something something society.

So why am I sticking around for next week? Because all of this headline- and disapproval-seeking malarkey is profoundly, proudly horseshit. Waking up face-first in an ex’s ass, nailing the stage mom in the back of the Suburban — these choices seem as flop-sweatingly false as Marty’s con-job in the MetroCapital boardroom. Sure, actors love saying and doing naughty things — Cheadle hasn’t looked this happy since the time he tricked Steven Soderbergh into letting him do a Cockney accent and Ben “Jean-Ralphio” Schwartz makes it rain better than Pac-Man Jones on vacation in Seattle. But expensing tequila shots can only get you so far.

The dirtiest secret of House of Lies, the one Carnahan and Showtime are desperate to keep quiet, is that underneath all the excessive consumption and buzzy bad-boy biz-talk is an exceedingly traditional workplace sitcom. And, potentially, a not-terrible one. In upcoming episodes, the chemistry between Marty’s three backup dancers (Aussie Josh Lawson as a buttoned-up nerd who went to college “near Boston,” Kristen Bell doing a neat variation on her robot-with-a-human-heart act from Party Down, and the aforementioned, delightfully douchey Schwartz) becomes impossible to ignore, even amid all the double-dealing and hate-fucking. While in New York, Marty’s pod desperately tries to sell loathsome people — themselves and the clients — as virtuous. The irony is that underneath their empty suits, they’re not half bad.