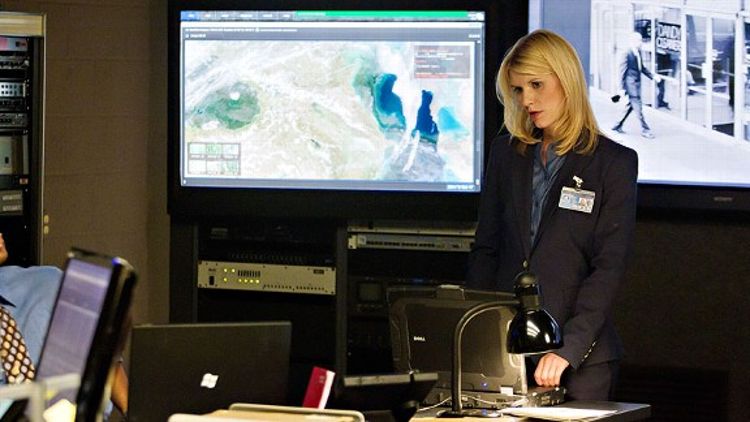 “Wackadoo Zoo” is the name of the third grade theatrical production that featured a bravura performance from 9-year-old Dana Brody so charismatic it single-handedly kept her father alive during eight years of torture, fruit-gorging, and meticulous hand-washing in Afghanistan. It’s also a perfectly suitable nickname for the world Carrie Mathison inhabits, full of deadly threats, bureaucratic cul-de-sacs and royal concierges who ask otherwise nice consorts to whore themselves out only to get two bullets in the belly for their trouble. “This is a fucked up business!” Carrie shouts in the best scene from last night’s third episode of Homeland and all we can do is follow the lead of Saul, her shaggy mentor, and nod our heads in agreement.

Teetering on high-heels and tension, Claire Danes’s Carrie is still all the reason you need to be watching Homeland. Her superiors may refer her informants in the field as “assets,” but that’s exactly what Carrie is to us: whenever the show begins dipping its toes into formulaic waters she’s there to yank us back to the edge of our seats. Homeland, the show, can still be a lot of mismatched pieces: family melodrama, workplace potboiler, after-hours Skinemax thriller. But when Carrie’s on screen, it’s all business. Take, for example, the moment Lynn, the aforementioned, clothing-averse consort, takes advantage of a planned meeting at a spa to show off her bikini lines. Carrie is waiting for her in the changing room, already halfway out the door. “You actually went swimming,” she murmurs as if doing anything other than staring at illegal wiretaps all night and not eating constitutes fundamentally anti-American activity.

Still, after two weeks of well-constructed, paranoid exposition “Clean Skin” dragged a bit, mostly due to too much time devoted to the minute-by-minute thrill ride that is a sit-down interview with Lawrence O’Donnell. (Should the couch be moved? No! Should Lawrence tuck in his shirt underneath that blazer? Yes!) Still, the O’Donnell-a-thon (seriously, we understand being grateful that he agreed to play himself on an unproven cable show but the guy is simply not that famous. “Is that … ?!?” asks an incredulous Carrie. “Lawrence O’Donnell — I know!” squees Virgil) pushed the family story along in necessary increments: teenage hellion Dana was planning on wearing a burqa to the taping and telling her pop about the cuckolding ways of his best friend, not to mention her “sleazy black thong”-wearing mom, but after a bonding walk (and an amusing introduction to a “video called YouTube”) she backpedals. “I’m not gonna lie and I’m not gonna tell the truth either,” Brody explains to her about his plan for both his television debut and, most likely, the next 6-9 episodes. The less said the better about Brody’s other big moment, an uncomfortable Hand Solo in front of his freaked, topless wife. And, for an encore, he cuddles up, blanketless, on his favorite spot on the floor. Yep, just a typical American hero, folks. Nothing to see here!

Except, of course, Carrie does see it on the jerry-rigged Bunim-Murray production she’s got going in her condo. It’s simply impossible for her to look away, no matter how onerous or onanistic the sight. “I need to find something here!” she yells at Virgil, who, kindly, attempts to feed his stressball superior with ten-year-old spaghetti and prehistoric tomatoes. But Carrie can’t help herself at work — insisting that the purloined data from Lynn’s Prince’s blackberry will contain world-saving evidence of a terrorist wire transfer; demanding that Saul’s hurt feelings give way to her own righteous vision — and she can’t help Lynn much either. En route to her “hospitality visit” with an unknown business associate, Lynn is gunned down in an alley by a chatty Town Car driver. (And here I thought all chatty Town Car drivers were friendly. Die Hard, you lied to us!) The prince wasn’t the baddie — it was his Machiavellian manservant who promptly pawns his boss’s jewels for a down payment on a starter home near the airport. It’s Extreme Makeover: Terrorist Edition and so far the CIA is none the wiser.

But perhaps Carrie is. Her high-strung freakout in Saul’s office is the high point of the episode, a manic symphony of disbelief, rage, guilt and fear. Alternating between patient and paternal, Saul slowly guides his brilliant trainwreck of a protégée back onto the tracks. Wackadoo Central, here we come!

Abducted Kids, Hijacked Helicopters, and a Murdered Basketball Star: Which TV Procedurals Are Worth Your Time This Week?