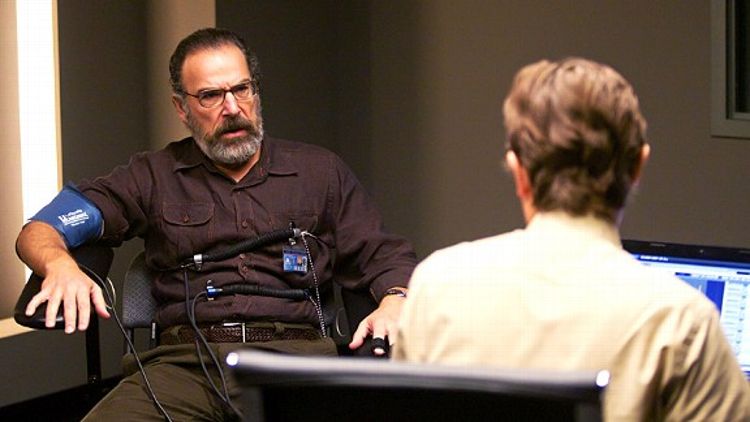 Lie-detecting is an imperfect science and an even less ideal way to tell a story. Too often, a staged polygraph test is an opportunity to turn hapless CIA drones into mini Basil Expositions, nudging the plot forward with unprofessional questions and teasing out stray bits of character development that might otherwise require more screen time or greater screenwriting finesse. Homeland staffer Henry Bromell, the fellow credited with scribing “The Good Soldier,” has been down this road before: He was the replacement showrunner for last year’s late, not-especially-lamented AMC drama Rubicon. Midway through that show’s run came an episode in which each member of the cast was strapped to a machine and asked probing queries more suited to a job interview at Grey’s Anatomy than a government think tank (“Have you cheated on your wife? Maybe you haven’t, but in my opinion you will. In your mind, you already have”). A similar question is asked of Sergeant Brody at the close of last night’s episode of Homeland, but the situation and the stakes couldn’t be more different. On Rubicon we watched polygraphs because we didn’t know the characters. On Homeland it was because the characters don’t know themselves.

Brody has the heaviest burden this week. First he’s tasked with putting a brave face to the world — and, more crucially, to his former Marine buddies — at the memorial service for Corporal Tom Walker, his fellow POW (only poor Walker was KIA). The man standing in front of the chapel has perfect posture and a killer tie (thanks to some bedroom assistance from Jessica, whose role these past few weeks seems to have been reduced to either dressing or undressing herself and/or others), but his boilerplate words (“Tom Walker was a good man”) obscure a more brutal truth: He’s the one who beat his former friend to death. Things get a little dicier back at the Brody manse where the veterans pound keg beer and rap terribly. One, Lauder, has a noisy pair of crutches and an even noisier mouth: He berates Brody, the former “wild man,” for becoming a “dick-sucking war hero trotted out by the brass so the morons in this country can have something to feel good about.” (Why don’t you tell us how you really feel!) Worse, he pops off about Mike’s bedroom behavior with Jessica and soon it’s a punchfest: Mike on Lauder and then, savagely, Brody on Mike. ”You were my friend,” Brody bellows into Mike’s busted chops before walking out and driving away. Another cool party at the Brodys! Come for the venison steaks, stay for the extramarital intrigue!

Over at Langley, the intrigue is also skewing internal. In front of the suits, Carrie, ballsy as ever, insists that “someone on our side” may have slipped Hamid the razor blade. Estes is furious — it should have been a sidebar! — but relents: polygraphs for everyone. When Saul points out that Estes had a right to be angry — she did kind of embarrass him in there — Carrie explodes (“Who gives a shit!?!”), asserting yet again her rightful place as television’s best cusser. As Estes and Carrie breeze through their polygraphs with barely concealed rage (him) and little white lies about drug use (her), the manhunt for Faisel continues. Only it’s also a womanhunt: Saul gets his procedural on and canvasses the neighborhood, discovering that the Bad Professor was playing house with a white woman. Soon, thanks to facial recognition technology (sure!), the spooks discover their quarry is Aileen Morgan, a moneyed WASP who grew up in Saudi Arabia and has a thing for anti-government agitation. Still, it’s a big jump from burning your Nikes in Seattle to potentially blowing up Dulles — but Carrie is an expert leaper. “Maybe she’s the one driving this,” she muses.

And indeed she is: Aileen is the one piloting the doomed Hyundai of love toward Ohio as a panicked Professor Faisel suggests turning themselves in. It seems like a reasonable option — especially after the rural safe house they flee to is rigged to blow sky-high as soon as anyone crosses the threshold. (Am I watching too much TV on Sunday nights, or did this farmhouse look identical to the one the survivors are currently holed up in over on The Walking Dead? If so, avoid the well water!) Now Aileen and Faisel, cover (but not bodies) blown to hell, aren’t just fleeing the cops, they’re also fleeing the bad guys. They hunker down in a Super 8 — Aileen has been “trained” for this sort of thing but can apparently think better while watching Nashville Star — but if Drive taught us anything this summer it’s to never get complacent in a motel. (Also? Never shake hands with Albert Brooks.) While Aileen is stressing in front of the sink, somebody ventilates the room — and the good professor — with bullets, leaving her scrambling out the window. Back to Daddy’s horse farm with you!

She’s got it bad, but our sympathies are saved for Saul. In a scene that’s either an enormous red flag or a flopping red herring, he’s agitated and fidgety in his interrupted polygraph: The needle jumps higher than Carl Lewis when he claims he didn’t hand Hamid the blade. Could Papa Bear be a baddie? Or just in need of some Prilosec? Back at home, his wife swats away his hopeful offer of a transfer to the Delhi office like an errant fly. She’s going back to India. Alone. It’s a devastating disconnect: She paints a picture of two separate lives, “good friends sharing a house.” To her, it’s punishment. To him? “Perfect.” When he empties his heart at his second polygraph, his pulse remains calm. The machine is fallible, but so are our heroes. After all, to whom has Saul been lying all episode: his country or himself?

But no one is more in need of a straightening out than Carrie, who is seemingly under the impression that she’s still an agent in the field and one of her core requirements is playing it. When Brody, fresh from his friendly fisticuffs, washes up at a bar, he uses his phone-a-friend lifeline on Carrie, who dutifully arrives and starts downing bourbon shots like her liver just insulted her mother. Carrie, as noted last week, is a master performer, able to turn on the flirtatious charm the way most of us turn on a light. Brody, of course, is smitten: Here’s someone he can relax and be himself around, where he’s finally able to drop the burden of being a “boy scout for recruitment” (and, y’know, a sleeper terrorist) and just be a guy again. (Damian Lewis is excellent in this scene, more than making up for the ham-handed fury of the BBQ. Brody’s neediness is so plain on his face we can, for a moment, see exactly what made him a prime candidate for corruption.) It seems as if Carrie is taking advantage of her quarry’s weakness, twirling her hair and smiling just so; the perfect spy in total control. But when Carrie, slurring her love of the Redskins in the parking lot, lets slip both the “classified” reason for Brody’s polygraph the next morning and, eventually, her actual slip, we don’t know what to think. At what point does this stop being an act for Carrie and become something she’s actually engaging in? Is she lying when she says she likes it when “life is like this, heightened somehow?” Or when she’s letting Brody boy scout all over her in the backseat of a car?

The next morning a postcoital Brody aces the polygraph but fudges his faithfulness to his wife. “You can’t deny the facts,” Saul says, ready to move on. But he’s wrong: These people can, and do so regularly. At Langley, denial isn’t just the river that runs near the Cairo station. Saul believed his marriage was stable, Professor Faisel believed he was in control. And Carrie thought she had finally gotten her man. But what part of him did she really want?