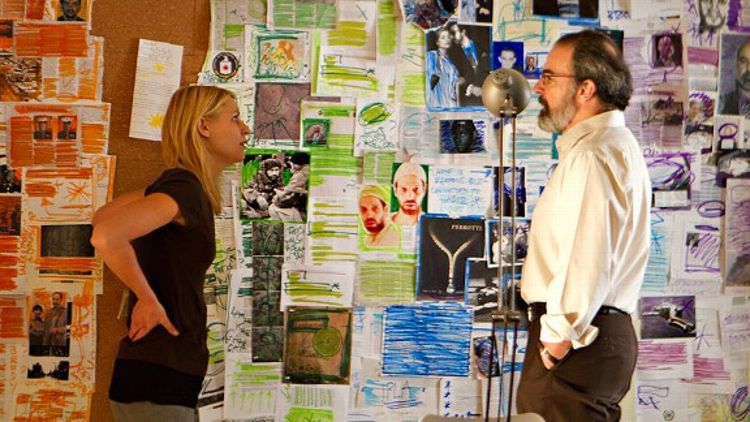 Chekhov’s famous rule, adapted to the age of terrorism, might read something like this: “if a bomb is introduced in the first act, make sure it detonates by the last.” No, the ball-bearing-laden death vest created by the ardently tinkering tailor didn’t go off — at least not yet. But last night’s brilliant Homeland did end with a shocking explosion. The only apparent casualty? The CIA career of Carrie Mathison.

“The Vest,” the penultimate episode of Homeland’s first season, was an intoxicatingly intense hour, expertly spinning plots both external, as the depth and immediacy of Brody’s mission are revealed, and internal, as Carrie’s bipolarity bubbles up at the worst possible time. Any expectations I had for a pro forma resolution to all of the various storylines — Walker would be thwarted, Brody’s intentions would be smoothly shunted off until next season — went out the window almost instantly. It turns out showrunners Howard Gordon and Alex Gansa have been lulling us with slow builds and subtle twists all in the service of a much bigger bang. Like their nefarious creation Abu Nazir, Gordon and Gansa don’t fall back on clichés or “spy novel 101 bullshit.” Rather, they explode. And it’s a delight being caught flat-footed by them again and again. Everything we’ve seen up until now — Carrie’s fraying sanity, her relationships with her father, with Brody, with Saul — has been as meticulously constructed as that suicidal undergarment in Pennsylvania. And now it’s all paying off. Saul’s surprised and satisfied smile, after staying up half the night assembling Carrie’s color-coded terror timeline, was my own.

We learned quickly last night that the revenge plot cooked up in captivity by Sergeant Brody isn’t a long con. On a family overnight to Gettysburg — billed as “one last weekend” together before the campaign changes everything — our future maybe-congressman proves himself to be both an adept at history (schooling his family on the remarkable achievements of Union General — and Matthew McConaughey look-alike! — Joshua Chamberlain) and of recent advancements in self-dismemberment. Claiming to be lacking a toothbrush, he ducks out of a post-battlefield snack in order to rendezvous with the onerous outfitter for a pre-attack fitting. “I read part of the blast goes upward,” Brody says, in a disturbingly blank voice, “So the head is cleanly severed. And normally found intact. Everything else … isn’t.” Damian Lewis is remarkably controlled here, speaking of his own horrific demise with the same admiringly distant tone he used to describe the defense of Little Round Top. Dana Brody is correctly suspicious of her father’s absence and catches up with him just as he hides a powerful explosive in the trunk of the family station wagon. (What’s next? Booby-trapped Putumayo discs?) Something seems to have tipped her off. Was it Dad’s creepy devotion to the “extremely religious people” who were “willing to do what was necessary for a cause” while bayoneting their fellow countrymen all those scores of years ago? Or perhaps it was his ominous request for her to “watch out for” her mother after he’s gone? Or perhaps it was the simple incongruity of him buying a neatly wrapped surprise present for Jessica at a CVS? Regardless, Dana is caught between the hope for a father she’d love to have and the reality of a dangerous man she barely knows. Even worse? As they walk back to the diner she happily mentions the sweet potato fries she ordered with her burger. Sweet potato fries? Give up, Carrie. The terrorists have already won!

Dana’s qualms about her father are abetted by her own surveillance rig, a digital camera that she uses to watch him in all sorts of creative ways: from the steering wheel, from the tourist barricade at the battlefield. At first, the view screen provides an idyllic image — “They’ve faded so fast!” she marvels, incorrectly, about her father’s scars. But over the course of the episode she experiences what might be termed a “reverse Carrie”: What started as devotion quickly descends into doubt. (That Brody continues to be observed and processed through various lenses and perspectives was wittily captured by veteran director Clark Johnson from The Wire.) And while the trap is now set — it seems as if Brody is set to sacrifice himself at the stir-crazy vice president’s own campaign kickoff even next week — there’s still a sliver of doubt about his dedication to the cause. Could he really leave Jessica now that she’s finally happy and wearing black negligees? Does he trust Chris to be “brave and daring” even though the only thing the kid seems to believe in liberating is free motel ice? Brody has ceased to be a man and become, in Jessica’s own words, “a promise.” But of what?

That we’re left wondering proves, once and for all, that Brody is far better at keeping secrets than Carrie is, despite it being her professional obligation to do so. The biggest skeleton in Carrie’s closet has always been her mental health, but, thanks to the trauma of last week’s bomb attack and the lack of meds from her freelance pharmacist sister, the closet doors have been thrown open. And what’s laid bare isn’t pretty. It’s written all across Saul’s face as he watches his protégée on a manic, jagged tear about green pens and Abu Nazir’s true intentions. Papa Bear’s anguish is apparent both because of the consequences of Carrie’s state and because, Sharpie fixation or no, he knows she’s right. Carrie’s been afflicted ever since college, we learn, when she wrote a 45-page manifesto that purported to “reinvent” music, all for a class she wasn’t even taking. (Going by my podcast partner David Jacoby’s logic, this event most likely occurred when Carrie, the world’s youngest CIA specialist, was an 11-year-old freshman.) Claire Danes will and should receive accolades for her performance here — acting crazy is challenging, but acting crazy while still being smart is another thing entirely — but Mandy Patinkin is a marvel as her partner, a study in stillness as he tries to manage an unmanageable situation.

We know that Saul is successful at work for precisely the reason he’s so miserable at home: His rational mind is always prioritized over his emotional heart. For Carrie, already split in two on a psychological level, this divide is crushing. Her job as an analyst is to be sober and methodical. But, off her meds, she’s spun around 180 degrees, in thrall to what her similarly bedeviled father wisely and presciently calls “the bad gut.” Her staring at neighborhood gardens and thinking via highlighter may make sense to patient Saul but could never fly in the real world of bureaucratic bullies like Estes and the vice president — especially the latter, who petulantly orders the firing of someone, anyone, in the department just to save face and avert boredom. Instead of helping her dad with the slow, collaborative work of piecing together a puzzle, Carrie goes all in once again with the wrong half of her brain, calling Brody and begging for help.

And Brody, perhaps foreshadowing what he’s intending to do, quickly blows it all to hell. Realizing that Carrie has come disturbingly close to the truth — that Abu Nazir’s plot is based on revenge and connected to a fallow period directly following Issa’s death — he calls Estes and confesses the affair, but paints Carrie as a deluded, harassing stalker. This last bit is, of course, true, though not exactly in the way he means. The episode ends in chaos, with Carrie’s secret revealed, her career ended, and her timeline — the desperate work of her fractured, brilliant mind — ripped to pieces. (Credit to Johnson here, too, for lowering the volume and letting the mournful jazz take the place of what appeared to be a room full of capital-A Acting.)

Until last night it was possible to imagine a conventional end to Homeland’s first season: some quiet reshuffling, a heroic dispatching of Walker, perhaps the revelation of the government mole (my money’s still on Galvez — the only other character in the agency with a first and last name — with “it doesn’t matter” running a close second). But no longer. Part of the legend of The Wire stems from the fact that each season would drive the plot right to the edge of the cliff in the penultimate episode — and then Thelma & Louisethat sucker into risky oblivion. Homeland isn’t in that rarefied air yet, but “The Vest” proves it shares some of The Wire‘s brave and unconventional DNA — and, yes, a thing for authority figures disrespecting carefully laid-out tackboards. There’s one episode left to go and, like those in Langley, I have no idea what’s coming. The only thing I’m sure of is that last night, Homeland made the leap from very good to great. Or, as Brody put it on a blood-stained site of America’s last internal war, it went from “so unexpected” to “so crazy.”