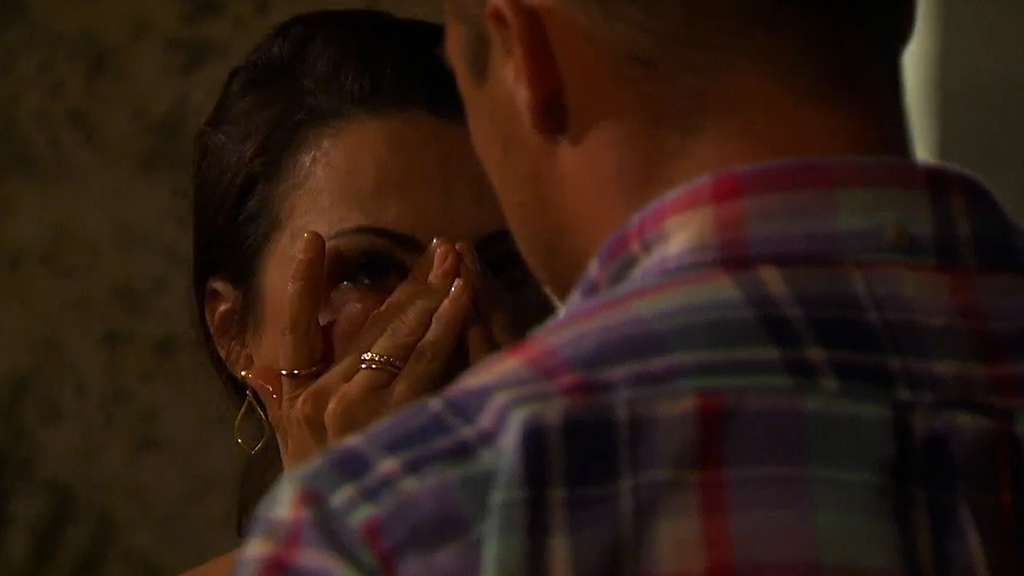 Here’s a novel concept: If a reality TV show airs a two-hour episode built around the idea of show-sanctioned coitus, IT SHOULD ACTUALLY FEATURE THE SHOW-SANCTIONED COITUS. Once only three suitors remain, every season of The Bachelorette boils down to competitive coitus, yet they never show it, talk about, or even really hint at it. And it doesn’t make any sense. You know what? I’m starting this week’s column by making The Bachelorette’s entire Fantasy Suite episode the GRTFL Questionable Moment of the Week:

Why doesn’t anybody talk about the fact that Andi is test-driving all three dudes over the course of a week? Are there condoms in the Fantasy Suite? Why don’t they show us more of what happens inside the suite before removing the cameras? Shouldn’t there be a post–Fantasy Suite coitus press conference, like it’s the NBA Finals? Why aren’t there reporters peppering Andi and Normcore Nick with questions about the performance? Can’t the producers just put surveillance cameras in the Fantasy Suite, Real World–style? Would you get engaged to someone before seeing that person naked? At the very least, couldn’t the show fly in Andi’s best friend so Andi could give her (and, in turn, us) all the details? Is it me, or does this franchise treat the Fantasy Suite dates very differently depending on whether it’s a season of The Bachelor or The Bachelorette? Since Chris Harrison isn’t doing anything else, couldn’t he do play-by-play for the Fantasy Suite coitus sessions so we’d know what’s going on in there? How can we get the advanced metrics community interested in the Bachelorette coitus conundrum? In summary, how does The Bachelorette manage to make the show-sanctioned coitus episode the worst of the season?

Worst episode or not, there’s still plenty to parse following Andi’s dates with Normcore Nick, Professional Sibling Josh, and Farmer Chris. Let’s get to it.

I know this sounds crazy, but I’m starting to think that going on a nationally televised reality show might not be the best way to find a spouse. While I was watching front-runner Normcore Nick fumble his way through a boring beach date with Andi, I said to myself: “I don’t think ANY of these dudes are right for Andi.” And I really don’t. At first, Normcore Nick felt refreshing thanks to the way he owned the awkwardness of the show’s format and used his own awkwardness to disarm Andi. The problem is that while it was cute for a while, it never wore off. These two have been dating for a couple of months, they’ve traveled around the world together, and Nick has professed his love, yet the awkwardness won’t go away.

Andi and Normcore Nick just don’t feel like a couple that’s about to get engaged. They can’t even get through a day at the beach without things getting weird. You know, your spouse is the only person in your family whom you get to select. Think about that for a second: You spend your entire life surrounded by your family, but you only have an active role in selecting this one person. Part of that selection process is evaluating what life would be like together, including while doing regular, everyday things. Well, this is how things went when Andi and Normcore Nick tried to do a regular thing like spend a day at the beach:

He used five unnecessary “likes” in one sentence. Later, he went on to tell Andi that he never shuts up, and that she’ll grow tired of hearing him talk if they wind up together. Talking a lot isn’t the worst thing in the world, but talking a lot while never saying anything IS the worst thing in the world. Andi’s mouth may have said, “I love when you can’t form a sentence, it cracks me up,” but her face told the truth: “When you can’t form a sentence it makes me question everything about you and want to get on the next plane home before subjecting myself to a lifetime of your constant babbling.”

In case the idea of a lifetime of listening to this guy’s incessant, meaningless bullshit wasn’t enough to scare Andi away from Normcore Nick, he did something so reprehensible I’m surprised ABC was even allowed to air it on television: He wrote Andi a children’s book. Complete with illustrations of a princess and a knight in shining armor. And he left the last few pages of the handmade (likely not by HIS hands, of course) fairy tale blank so they could finish their story together. Barf.

Remember last week when I called Josh a “professional sibling” because it seemed like his sole interest was supporting his brother’s football career? I was kind of kidding and kind of not, but the thing is, it looks like I might have been right. Check this out: This dude tweeted me to say that after Josh’s failed minor league baseball career, he went BACK to college so he could play football with his younger brother, Aaron. I did some research (30 seconds of Googling) and learned that in 2009 and 2010, when Josh was 25 or so, he did indeed play football and baseball for the University of Georgia, where his brother Aaron played from 2009 to 2013. THE MAN WENT TO COLLEGE WITH HIS LITTLE BROTHER WHO IS SIX YEARS YOUNGER THAN HIM. I don’t know this for a fact, but I’m willing to bet that they roomed together. Weird, right?

Equally weird: every response that every Bachelor or Bachelorette has ever given after a suitor confesses love. By rule, the Bach or Bachelorette isn’t allowed to confess love for a contestant, but even so, they’re shockingly awful at responding. Case in point: the way Andi handled Josh the Professional Sibling’s pseudo marriage proposal:

Josh the Professional Sibling: “Next person that I say I love you to I am going to marry and spend the rest of my life with. And I love you. And that’s what I want.”

That’s not what anyone wants to hear after confessing love and telling someone you want to spend the rest of your lives together. In addition to dropping that one on Josh, Andi followed up throughout the date with comments like these: “I thought you would never be my type, I can say that,” and “You’re always, like, happy and go-lucky and, like, I love that … but sometimes I’m just, like, ‘Is he happy in general? Does he love what he’s doing?’”

In summary, Andi doesn’t think Josh can handle marrying her, she isn’t sure he’s the kind of guy she wants to be with, and she questions his disposition. Am I really supposed to believe there’s a chance she marries this dude? Hell no. It looks like Andi’s going to be stuck with Mr. Never Shuts Up Fairy Tale Guy for the rest of her life. Being the Bachelorette is starting to look less like a privilege and more like a punishment with every season.

The thing about Farmer Chris is that he is, you know, a farmer. That means he lives on a farm, farms, and does farmer shit. Andi is not a farmer. Farmer Chris never mentioned considering a life away from the farm, and it’s always been pretty clear that if he and Andi got engaged, Andi would be the one putting her shit into a U-Haul. Even though Andi can’t stand having a conversation with Normcore Nick and questions everything about Josh the Professional Sibling, she had even less chemistry with Farmer Chris, who was clearly going to be the one to go this episode. Still, let’s just say that Andi could have been a little more considerate when she axed him instead of taking him to the Fantasy Suite:

Andi: “I just think I would rather be honest with you and tell you that I’m trying and trying and it is not there than blame it on Iowa.”

No Andi, BLAME IT ON IOWA. Why are you hurting another human being in the name of “honesty?” Sometimes honesty is the WORST policy.

I really hope that Andi doesn’t get engaged in two weeks (next week is the Men Tell All episode). If she does, it better be to Chris Harrison, because he’s the only dude on the show she has chemistry with. Maybe something’s going on there. Maybe that’s why he didn’t do the coitus play-by-play!

Enjoy your weekend, listen to the Right Reasons podcast, and check back next week for the latest on Andi’s doomed quest for ForeverLove.

Straight to Video: ‘Dawn of the Planet of the Apes’ Review

Video on Demand Report: Bring 'Under the Skin' Home — At Your Own Peril