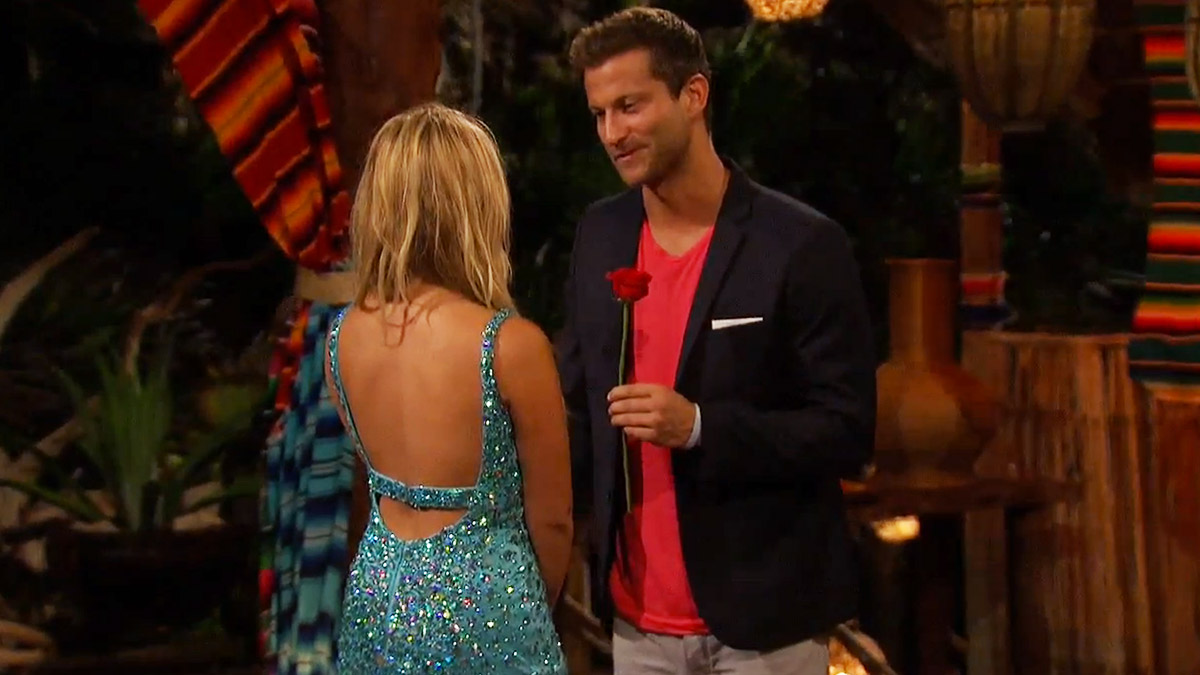 Bachelor in Paradise continues to deliver. The only frustrating thing about this show is that it’s going to be over one day. Given the format, it could easily exist forever, an endless loop of lunatics looking for love and finding nothing but sun poisoning, hangovers, and Chris Harrison. This week’s episode brought awkward kisses, depressing realizations, and Elise going full Kathy Bates–in-Misery on Chris Bukowski. Let’s start there.

In the first episode of this wonderful program, Elise fell in love with Dylan. Real love. She talked about the “connection” they shared, their future, and how their love would last way beyond paradise. Then Dylan fell asleep a little early one evening, and Elise went and ocean-coitused Chris Bukowski. Mere days after professing her love for Dylan, Elise was all up on Chris and looking at him with those “give me babies NOW” crazy eyes. Chris seems like the type of dude who just likes to be on TV, so he went with it, knowing he needed to be semi-coupled up to stay on the show. But when Elise got an overnight date card, she invited Chris out for the evening. And that’s when things got weird.

While Chris was walking to get ready for the date, he twisted his knee in the ocean, spraining his ACL and MCL and partially tearing his meniscus. BUT WE DIDN’T SEE IT HAPPEN ON CAMERA. Clearly, Elise intentionally injured Chris, knowing he’d need her to take care of him while he was bedridden, while also preventing him from sneaking off to ocean-coitus other women. If this were, you know, legal, it would actually be a pretty good strategy. Sure enough, while Elise was back-rubbing and hand-feeding Chris, she made the totally logical leap from “See, I can take care of you” to “This means we’ll have a family together.”

“I’m a caretaker, and I can’t wait to have a family to take care of,” Elise said. “And taking care of my man makes me happy, and seeing that shows him, I hope, that that is the type of girl I am.”

Later, on their actual date, Elise was equally subtle and sane about Chris playing hurt: “You stepped up to the plate and you showed me that you are ready to take on anything. You were ready to push through all the things that we were dealing with, and that’s the type of person that I want to spend my life with. And trust me, you will be blessed for the way that you have been to me.” That loosely translates to this: “You limped through this date, so I’m going to have sex with you. Then we’ll spend our lives together. Or, I’ll injure you again, keep you tied to my bed, and never allow you to leave.”

At the end of the episode, the two of them left the show to go back to Chris’s hometown of Chicago and nurse his wounds. You’ll never believe this, but it didn’t last.

Like Elise, AshLeeeeeee is measured, rational, and reasonable when it comes to matters of the heart. She’d been Instagram-stalking Graham before the show, targeted him the moment he arrived, and hasn’t let any other woman talk to him the entire time. Until this episode, the two of them hadn’t even kissed, but that didn’t stop AshLeeeeeee from talking about their future together: “Hands down I can imagine myself leaving here with Graham.” Or about Graham meeting her dad: “I’m not going to lie, my dad would be, like, real proud of me for picking Graham.” Or about their inevitable offspring: “I don’t want to rush things, I don’t want to force things, but we would have hot babies.” But don’t worry, Graham, she doesn’t want to force things.

Next week we’re going to get four hours of Bachelor in Paradise, and if I’m not mistaken, it looks like Graham rebuffs AshLeeeeeee’s rose, leading AshLeeeeeee to run off into the jungle and subsequently be hospitalized. This show is the best.

When Clare was on the beach with Zack, a turtle walked by to lay eggs. Clare reacted, you know, real Bachelor in Paradise–y: “I believe in little signs in heaven, and this turtle rolling up on the beach and leaving all its eggs was a sign of new life. That was my dad telling me that there is new life for me.” Clare just hit for the Bachelor in Paradise cycle: In one quote she (a) talked about giving birth, (b) brought up her deceased father, (c) mentioned signs, and (d) talked about God. Knowing Clare, though, there’s a 60 percent chance she was mistaken and that turtle was just taking a shit.

Sarah lacks the delightful delusion that her cohorts on this program have. Her worldview is actually a little TOO REAL. When it became clear that Michelle Money had designs on Sarah’s target, Robert, Sarah broke it down: “I just feel like he wants one of these perfectly put together Bachelor girls. … I think Michelle is beautiful and that she is confident and all the things that I am not [starts crying], and so I feel like I missed out [cries super hard].” I know I make fun of these women for being delusional and all, but sometimes being delusional is better than being all too aware of your own shortcomings.

As I mentioned earlier, next week we’re getting four hours of Bachelor in Paradise featuring AshLeeeeeee running off into the jungle, someone getting hospitalized, and THE RETURN OF CLARE’S TALKING RACCOON! So pumped. Until then, enjoy your weekend.

Video on Demand Report: Catch Up With the Second Second ‘Spider-Man’