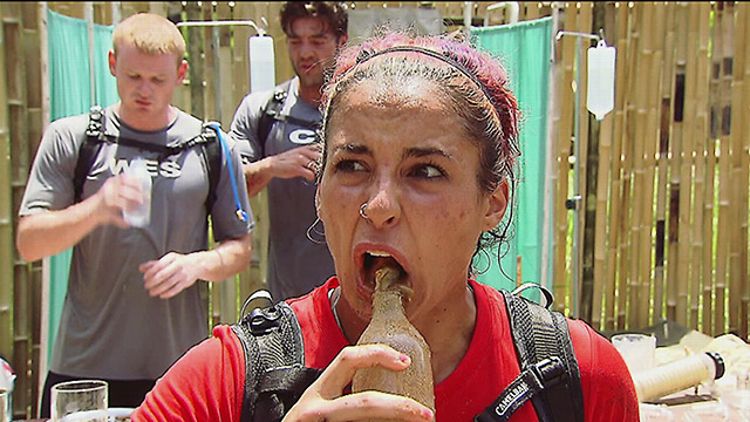 This was a super weird week for reality TV. It was emotional, it was uncomfortable, and it was gross — but it was also enjoyable, kinda. On the Challenge finale, everyone puked; on Survivor, everyone cried; and on The Challenge‘s first (and likely last) live reunion show, everyone did whatever the fuck they wanted (that was the enjoyable part). There was beauty in the chaotic swirls of vomit and tears, fulfillment that must be celebrated … so on to the scores.

Challenge legend Chris “CT” Tamburello puked a bunch (10 points), finally won a season (50 points) of this silly franchise we love so much, and, for a moment, all seemed right with the world … until the reunion.

Jonny Moseley, the hostess with the leastest, started off the proceedings by saying, “Tonight, for the first time ever, we are live, and that means anything can happen.” Mr. Moseley sat atop this television show like a rookie bull rider on the most ornery of steers. He attempted to maintain control via his index-cards crutch while the dozen or so reality-TV veteran cats he was charged with wrangling scurried every which way. The questions he asked were rebuffed, the transitions he made were laughed at, and the violence he tried to avoid played out right in front of his faux-smiling face.

To Moseley’s credit, even Oprah wouldn’t have been able to stop the onslaught from Knight The Sociopath toward Freddie Mercury Frank The Alcopsychoholic. Still, it did not go well. A seemingly intoxicated (read: slammered) Knight had predetermined that the live reunion was his opportunity to handle Mr. Mercury fist-to-face. He wasted no time doing so:

This is exactly the type of shit one should expect when having a live reunion show, and this is exactly the type of shit my pod partner suggested MTV edited out of the West Coast feed to save face. Au contraire! THEY POSTED IT AS A STAND-ALONE CLIP on a section of the site titled “Show Clips” that only has one “Show Clip.” Now that we know Bunim/Murray and MTV fully endorse and promote violence among cast mates, can we stop pretending that this type of shit will get the contestants kicked off the show already? I mean, for fuck’s sake, Bunim/Murray, you produce Bad Girls Club and you tape a full hour-long show just to clip off and promote the most violent 90 seconds, so why front? Do you. I love BGC and would love The Challenge even more if it stopped pretending to be a legitimate contest for a cash prize and started proudly being what it is: a shit show.

There was no bigger shit show than this year’s reunion, and there was also nothing more compelling to watch. At one point, CT Gorilla pimped control of the program from Jonny Leasteley. At another, Knight started slapping people. All the while, viewers were asked to hashtag their Instagram video questions in order to have them answered. To recap: Knight slapped a guy in the face, CT disrespected Jonny time and time again, and Jonny responded to it all by asking for Instagram video questions. The whole thing was a mess. In fact, the whole final was a mess. Just ask Super Scorer Caitlin Mangum.

Normally Caitlin sends me the scores, plus a couple of thoughts on the show. This week, her notes were so on point I decided to share them with you unedited. Without further ado, Caitlin Mangum’s e-mail to me, in full, and 100 percent without her permission:

The four most athletic teams have made it to the final??? Sorry, but that’s false. Jordan could be Tom Brady’s No. 1 target for the Pats right now….

Why did they get rid of two teams before the second leg? And why didn’t they have to sit on a block of ice for 9 hours overnight while their partner slept? And why is there apparently no chance of death by electrocution? I already hate this Final Challenge and the second leg hasn’t even started yet.

And by Country Breakfast restaurant, you mean Cracker Barrel, don’t you CT?

Again, this emphasizes my point… Why don’t these people practice common puzzles like this triangle peg one?

Did they give them the Pythagorean Theorem or did they have to know it? A squared + B squared = C squared is one of the few things I remember from geometry.

“My big, fat fingers do not make good pens.” —CT

YES, COOKE…. THAT’S HOW YOU’RE SUPPOSED TO WIN THIS THING! LOOK OVER AND SEE WHAT THE OTHERS DID. That was the most obvious thing and yet no one does it. Cooke may be the most brilliant Challenge contestant yet (which of course isn’t saying much)…

They’re going all Fear Factor on us. Love it.

Cara’s face drinking the soup was phenomenal. I just watched it 6 times… and I’m about to go watch it a 7th…..

Paula and Emily can down some weird shit. That was scary how impressive it was.

Love the smear of sunscreen on Wes’s face:

Who buried the fucking idol box in the sand?! Couldn’t you have buried it deeper than 18 inches? This Final Challenge is a joke.

Why wasn’t the final stage an impossible puzzle. That was stupid. I hate this fucking Challenge.

This thing is over and the teams don’t even look winded.

Happy for CT. He is no longer the Susan Lucci of the Challenge.

Survivor was pretty so-so this week, but it showed a lot of promise. If nothing else, it did serve as a reminder that there is an NPR to The Challenge’s KISS FM. But I’m not going to focus on the heady, interesting aspects of this version of reality-TV sport, because that would be weird. Instead, I choose to turn my attention toward Colton, The Worst Man. That is my new nickname for him, by the way: “Colton, The Worst Man.”

Colton, The Worst Man was up to his old/worst tricks in this episode. It started with Tina, Kat, Monica, and Laura crying (5 points) when they went to watch the Redemption Island Duel:

The ladies’ tears were emotional and all, but that had little effect on Colton, The Worst Man’s disposition or, more importantly, his status as The Worst Man. Not only did Colton make no effort to bond with his new tribe, he went out of his way to dis his teammates every chance he got. Here is some of his best work (mind you, he did meet these people two days ago):

Colton: “I feel like I am in middle school, like, I don’t mind campfire chats or whatever but it is like that is all they want to do.”

Don’t hate him yet? Try this one:

Colton: “Do you think this is like a YMCA camping trip where we talk about how we are going to improve ourselves? Well, I want to improve myself by winning a million dollars.”

Colton: [Mocking his tribe.] “Strategy, what is strategy? We are a unit we are unity we are peace we are Zen [changes to evil voice] we are stupid.”

The best part of Colton, The Worst Man’s worstness is that he does it all with this look on his face:

I can’t tell if I’m desperately rooting for him to stay or to leave at this point. The Challenge never confused me like this, and that is why I love it.

OK, why would the producers insist on devoting 10 of their 44 finale minutes to watching the cast eat disgusting shit like maggots and pickled fish guts and then puke their faces off? Why? I have no idea, either. Luckily for Paula and Emily, puking, crying, and running are what they do best (5 + 10 + 50 = 65 for Emily, 60 for Paula).

There was so much damn puking during this episode that this week’s GRTFL Top Five is the Top Five Pukes From The Challenge Finale, ranging from gross to super-gross to “oh-my-god-is-that-man-human?” gross:

5. Emily checks in at no. 5 because she was the only one who used the provided puke buckets. Shout-out to you, Emily, for your grace under puke fire:

4. Four goes to Frank, who also showed discretion with his “No one will see me if I puke behind this table” puke:

3. Cara Mara was extra gross because every one of her pukes came with a side of double heave and panic tears. The horror:

2. Challenge legend Paula Walnuts earned the no. 2 spot less for her puking, more for her eating. The puking was gross — I mean, super-gross — but trust me, watching her eat this stuff was more nauseating than watching her vomit it back up:

These four players made it to the finale and lost, so instead let’s talk about something that was almost as nauseating as the puking segment: the clothing choices at the reunion. This week’s GRTFL Questionable Moment Of The Week is the fashion selections the cast made for the live reunion show (caveat: I am no Karl Lagerfeld, but at least I don’t look foolish):

Marlon, do you know bedazzled graphic print T-shirts aren’t even made fun of anymore? Preston Rondo, maybe no need for the Boy George hat? CT, you know you can’t put a pocket square and pajamas on the same chest at the same time, right? Right? Camila, do you need directions to the Flavor of Love elimination ceremony? Emily, did you think steampunk-slash-Forever 21 was something you could pull off? Cara Maria, you know this is the The Challenge Reunion and not the casting for The Bride of Edward Scissorhands, right? Wes — damn it, Wes, why did you have to be so normal this season?

Check back next week for more bullshit about bullshit TV. Enjoy your weekend.