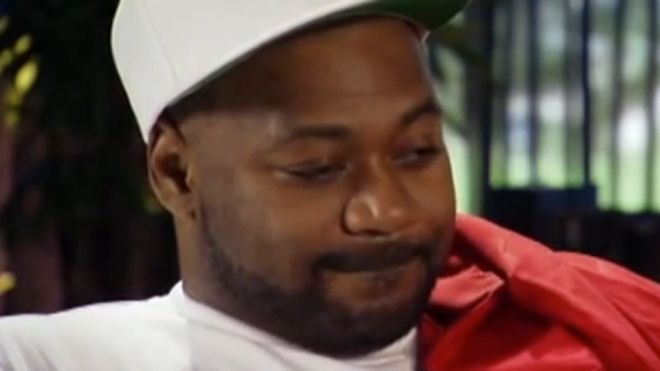 Look, I’m not going to lie: It was a down week for reality TV. With The Bachelor getting boring, Real World not as ex-plosive as expected, and Vanderpump Rules coming to a finish, there just wasn’t much meat on the bone. There is hope, though: There’s going to be a pregnancy on Real World, and The Bachelor will always be fun, just for Juany Pabs’s reactions when the ladies use sentences that contain more than four words. The dude CLEARLY has no idea what they’re talking about; he makes out with them because that’s the only time he doesn’t have to pretend he understands what they are saying.

However, there is one little sparkling gem on the golden eagle bracelet that is the current state of reality TV. And that gem is Ghostface Killah’s performance on Couples Therapy. Allow me to explain.

You see, Ghostface went on Couples Therapy with Kelsey to work on their relationship, a relationship that really started in earnest only four months ago. One might think that Ghost agreeing to televised therapy with his girlfriend was at least in part motivated by a genuine interest in bettering the relationship. One would be wrong. Not only is he not there to really work on his relationship with Kelsey, HE ALSO HAS ANOTHER GIRLFRIEND ALTOGETHER. A REAL GIRLFRIEND. Watch as he drops the grenade on Kelsey:

So not only does he actually have another girlfriend, and not only has he been with this other girlfriend much longer, BUT HE IS ALSO BRINGING HER ON THE SHOW. Ghostface is Shia LaBeoufing Couples Therapy. The whole thing is performance art. He has no interest in improving himself or his relationship; he’s having a laugh.

This Week’s Boring Episode of The Bachelor Breakdown

Clare (The Bachelor, 10 sympathy points): After last’s week’s alleged Vietnamese Ocean Coitus, the producers gave Clare a second one-on-one date so she and Juany Pabs could talk about the Vietnamese Ocean Coitus. It was fucking weird. They’ve spent 25 minutes of airtime talking about what happened in the ocean, and I still have no idea what happened in the ocean. Also, Juan Pablo is a terrible communicator. The dude speaks so little English that he doesn’t know how to resolve conflicts other than to make out with people. I feel like if he stepped on someone’s foot in a bar, he would instantly start making out with that person. This week’s GRTFL Top Five is the Top Five Words and Phrases that Juan Pablo Didn’t Understand This Week:

Finally, after she and Juany Pabs made out for hours because they can’t communicate in any other fashion, Clare said something in an interview that provided a perfect look into the worldview of the type of person who comes on this television show: “It was one of those moments where if you see it happening, you are like, ‘I want that, I want what they have, I want that feeling.’ And tonight I have that feeling.” SHE ISN’T HAPPY BECAUSE SHE IS HAPPY, SHE IS HAPPY BECAUSE SHE THINKS OTHER PEOPLE WANT TO BE HER. So twisted.

Cassandra (The Bachelor, 5 points): Rodney Stuckey’s baby mama got bounced this week, and all I could think was what Stuckey might be thinking about. In fact, that’s the GRTFL Questionable Moment of the Week:

Does Rodney Stuckey watch the show? Do his teammates watch it and clown him about it? Does he talk to Cassandra? Is he trying to get back with her? How long did they date? How many people tell him he looks like 50 Cent? If she gets married, would that change his support payments? Was her getting kicked off the show a million-dollar loss for Stuckey? Does he hate Juan Pablo? Did she move to Phoenix because the Pistons wouldn’t let her on the dance team because she slept with Stuckey? Are the dancers allowed to sleep with the players or are there rules against that? What ever happened to that VH1 show about the NBA dance team? I watched WAY too many episodes of that shitty show.

Caitlin: Andi had been lamenting how she hadn’t gotten any solo time with El Bachelor, but the girl finally got a one-on-one date this episode, saving us all from hearing her complain for at least one week.

There’s only one move in Juan Pablo’s playbook: water. (Well, that and making out.) So naturally he took Andi on a miserably cold riverboat ride, only to then inform his ladyfriend they would be disrobing and swimming through something called the Squeeze. Every girl’s dream date involves forcibly wading through waist-deep freezing water, so naturally Andi was pretty stoked.

After a little making out and a little accidental waterboarding under the waterfall, Juan Pabs and Andi had a romantic dinner next to an active geyser, where we as viewers were subsequently treated to roughly 427 sexual innuendos involving the words “exploding,” “erupting,” etc.

Of course, the geyser exploded and they got wet. I HATE sitting around in wet clothes; it’s the main reason I avoid all water rides at amusement parks. Luckily for these two, they got to spend 14 hours damp and miserable in the name of love.

All in all, the date was pretty excruciating. But there was one important thing that came out of it:

We were treated to the first one-piece bathing suit in Bachelor history.

We are all witnesses.

Jacoby, what do you have to say about this historic event?

Jacoby: It surprised even me, but I was 100 percent in on the one-piece. It had a Baywatch, Olympic swimmer, ’80s SI Swimsuit Issue vibe that really worked for me. Also, it was 40 degrees outside, so it worked for Andi, too.

Scores below. Let’s hope for better TV next week. Have a good weekend, everyone.